All of a sudden monolingual English speakers were really into a World Baseball Classic game between the Dominican Republic and Puerto Rico. At least that is what one could conclude last night when ESPN ran the ESPN Deportes’ Spanish-language simulcast on the flagship network. The game, which the DR won 4-2, got an 0.3 overnight rating (ESPN got a 0.6 rating last Sunday for an NBA game and we are pretty sure that the game in Spanish would have beaten any “30 for 30” ESPN would have run instead). No matter, since if you were online last night, you would have assumed the END OF AMERICA was coming and that there were a lot of upset people who wanted to catch this baseball game in English, even though the same game was being broadcast in English on MLB Network at the same time.

So no, the ESPN outrage wasn’t about baseball at all. It was all about ignorance. As Deadspin so beautifully put it, “‘Is It Me Or Has ESPN Been Taken Over By Wetbacks?'”. Or check out the Storify we did just two minutes after ESPN Deportes announcer Ernesto Jerez, one of the best voices ever, started talking.

Yeah, social media can mostly be for dummies. This was just another case of it, and these four tweets that Deadspin found only confirmed it:

When you have actually human beings who don’t know the difference between Puerto Rico and Mexico, or between speaking Spanish and speaking “Mexican,” you got issues.

And then you have this one, which we will frame for eternity: 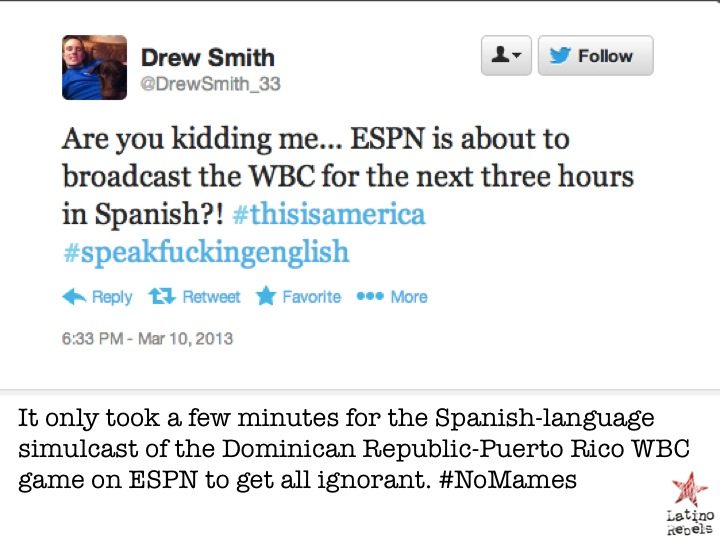 You can find more at #ThisIsAmerica. You get the picture.

When we asked ESPN about the reaction, we were lead to a statement that they already shared before: “The World Baseball Classic provides a great showcase of how ESPN’s resources can document a global event with strong multi-cultural appeal. Having the exclusive Spanish-language rights to all 39 WBC games on ESPN Deportes provides us with unique opportunities to serve fans across our television, audio and digital properties. These two WBC games are the latest examples.”

So while ESPN will not address how many of its fans are a bunch of ignorant nativists, at least we can understand the business reason why the network did what it did, and that is a good thing. As one outlet said:

Not everyone was happy to see it, but in full honesty, it’s a smart move. With a light NBA schedule plus the college basketball conference tournaments transititioning from the mid-majors to the “BCS” leagues, why not put the WBC on the Mothership en Español?

Now ESPN does not have the English language rights to the World Baseball Classic, that belongs to MLB Network. But ESPN signed up for the US Spanish language rights for its Deportes channel. And just last week announced that Sunday night’s ESPN Deportes simulcast on ESPN would be the first of two such instances during the WBC, the other would be this Tuesday afternoon on ESPN2.

You ask, “Why would ESPN do this?” First, it’s a way to siphon off some viewership from MLB Network. Yes, the games are being aired in Spanish, but if you don’t get MLB Network, this is a way for you to watch the World Baseball Classic.

In addition, ESPN has language in its contract allowing it to put games on any platform it chooses. Since the World Baseball Classic games are being aired in Spanish, it’s not in conflict with MLB Network’s contract so the games can air on the Mothership and the Deuce. Had Sunday’s game involved Team USA, MLB Network may have raised a stink, but with it having two teams from the Caribbean, MLB signed off. And with ESPN’s wider distribution, it might have a bigger cable rating than MLB Network.  A Spanish language broadcast of two Caribbean teams makes sense for ESPN with that growing demographic. It’s also a way for ESPN to get around not having the broadcast rights to certain international sporting events. If more viewers are going to tune in for Spanish lanugage WBC coverage than whatever documentary or program ESPN was planning to show, it’s a success for the network.

And you also got to hear Jerez give his signature homerun call twice last night. How can anyone hate that?