After videos (see below) were posted on YouTube chronicling a confrontation between a University of Oregon School of Law adjunct instructor and students on Thursday, the university has reassigned James Olmsted’s teaching responsibilities, but did not reveal if any additional disciplinary action was taken against him.

According to local Oregon media, this is the statement that the University of Oregon released today: 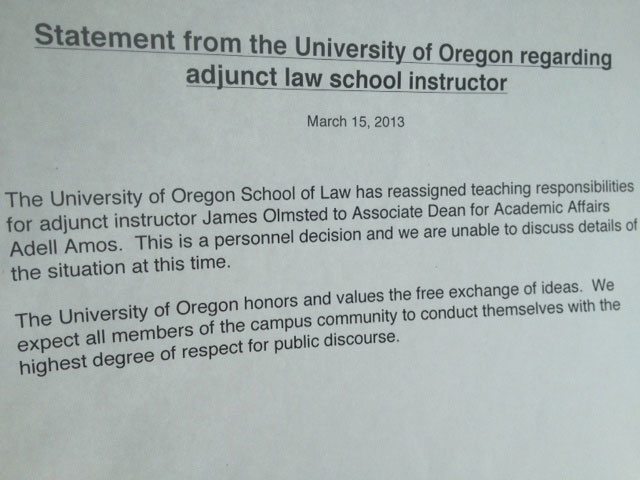 Here are the videos in question showing Olmsted confronting students:

Campus police cited Olmsted for theft and two counts of harassment at the student-led protest on campus.

KVAL News reached Olmsted by phone Friday. He was very upset and said it would be best if he did not make any public comments on Thursday’s incident on campus.

Olmsted, a local attorney, is shown in YouTube videos in a confrontation with protesters from Students Against Imperialism, a group concerned about U.S./Mexico border issues and Palestinian liberation.

Diana Salazar, a senior at the UO who co-founded Students Against Imperialism with junior Jaki Salgado, said Olmsted grabbed her after a heated argument at the mock border checkpoint protest held at outside the Erb Memorial Union on Thursday afternoon.

Salgado said she started taking video on her camera phone just seconds after the confrontation at the protest started.

The video shows Olmsted shoving students and yelling explicit language while engaging in an argument with students in front of the EMU amphitheater.

Salgado said Olmsted grabbed her camera phone while she was taking video. She said he did not return the phone until campus police arrived.

A spokesman with the UO Police Department told KVAL News Olmsted was arrested in front of the EMU Thursday afternoon and cited for theft and two counts of harassment. Police added that the incident is an ongoing investigation and that charges may be changed in the future.