With Puerto Rico in WBC Final, Suddenly Some Americans Feeling Proud of its Colony

Given that the Puerto Ricans are the tournament’s underdogs, first defeating the USA and now the Japanese, boricuas on the island and on the mainland are thoroughly enjoying the last few days. This is a big deal. A really big deal.

Looks like the pride for Puerto Rico has also hit the American social media mainstream, as the following screen grab shared by Facebook page of Jay Fonseca went viral last night, even though the poster lacked true knowledge of Puerto Rico’s relationship with the United States. 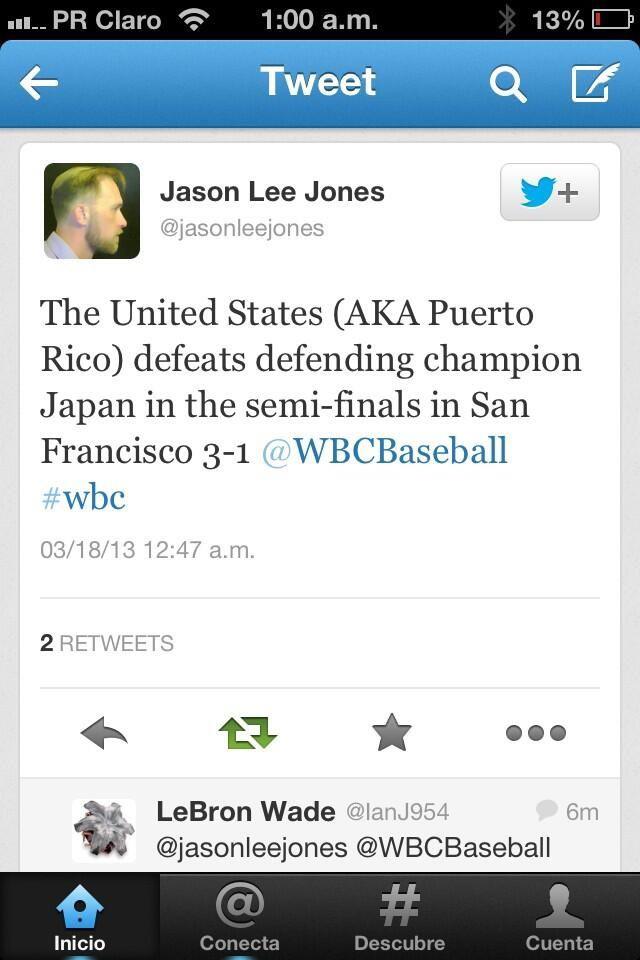 The interest in Puerto Rico even lead one FOX Sports columnist to drop some knowledge about the nuances of playing for a team that is neither fully American nor fully Puerto Rican. Such is the paradox of the island-colony. And let’s not jump to conclusions yet: this is not America’s team, as the headline for FOX’s Jon Paul Morosi suggests. However, we have to give Morosi credit for at least trying to explain (in a sports column!) the Puerto Rican dilemma to others who have no clue. Here is Morosi writing about infielder Mike Aviles:

Aviles, who was born and raised in New York, is a U.S. citizen. So are his teammates who were born on the island, by virtue of Puerto Rico’s status as a U.S. territory. Debate persists in Puerto Rico over how seriously the commonwealth should pursue statehood. No one knows how a divided U.S. Congress would handle the matter if it reached Washington.

In sports, though, Puerto Rico operates as a nation unto itself. Puerto Rico has its own baseball federation and, thus, its own team in the WBC. Aviles and manager Edwin Rodriguez each referred to Puerto Rico as a “country” during interviews Sunday. After such an historic win, that was appropriate. The “small little place of about 4 million people,” as Aviles described it, is the first team to eliminate Japan in WBC play.

U.S. fans in search of a rooting interest should note that every Puerto Rican run in Sunday’s game was driven in by a player born on the mainland: Aviles delivered a tone-setting RBI single in the first inning, and Alex Rios — the native of Coffee, Ala. — struck the clinching two-run homer in the seventh.

We understand that Morosi is trying to paint the Puerto Rican team as a mini-U.S. team, and even though it might be a stretch (did he not see how many Puerto Ricans were thrilled to have its team defeat the Americans last Friday?), he does gets points for at least TRYING to explain the issue with a little bit of intelligence. Other mainstream media types should follow suit.

But yeah, we get it. The U.S. loves an underdog, and if this baseball team can help to shed more light on Puerto Rico, that would surely be a good thing. Especially to those who don’t understand why many Puerto Ricans see the island as a “country” and not just a U.S. territory or a 51st-state wannabe. As Morosi writes:

Winning has a way of doing that. The young eyes in San Juan, Carolina and Ponce must be mesmerized by the sight of their countrymen humbling the world’s biggest baseball stars.

“What we’re doing here is starting to give the little kids more hope that good things can happen, good players can come out of that small little area,” Aviles said. “It’s a small little island, but that doesn’t mean it has to be forgotten about.”

One more win, and they’ll be telling stories about this team for generations. And if it’s against the Dominican … well, that will make the fairytale better. Only in America, indeed.

It would surely be something if the island-colony could pull it off. Although we doubt that if it happens, the mainland U.S. will be rushing to join the team at a victory parade. To think that a baseball team can make Americans notice Puerto Rico again. Only in America, indeed.

One response to “With Puerto Rico in WBC Final, Suddenly Some Americans Feeling Proud of its Colony”