OPINION: Can Latinos Stand with Rand?

For most of my life I did my best to stay away from politics. I always felt that there was no point and that it is just a huge waste of time. In fact I still feel this way most of the time. We have created these imaginary sides, the left and the right. Team Jacob and Team Edward for you Twilight buffs. Imaginary lines that create divisions among the masses. Humanity and our divisions.

All the same I’ve had no choice, and I have progressively become more involved with politics. As a young adult when I first registered to vote many years ago, I had no idea which party to support or why. I knew nothing about politics. For some reason though I chose the Democratic party, I believe my reasoning was because Democrat sounds like democracy. Since then and for most of my life, even while completely lacking any knowledge whatsoever on politics, I supported the Democratic party. While unaware of the different nuances and views of the two main political parties, even back then I had views that favored less government. 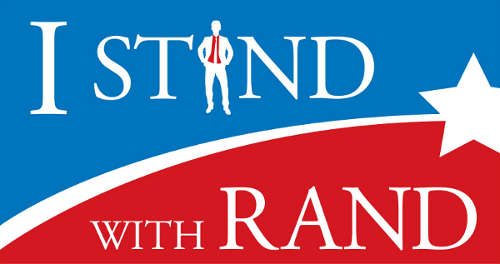 Today, I know a little more, but not much more. For every thing we think that we know, there is that much more we are blind to. Especially when it comes to politics and these made up lines such as the left and the right. At the end of the day, regular people like you and me get screwed for the better interests of someone else regardless of who we support. “South Park” did a great episode on this during the Obama/McCain campaigns—in the end both candidates were allies planning a huge diamond theft.

This is when a guy like Rand Paul really stands out and catches your attention. Rand is a member of the Republican Party and a member of the Tea Party, but before you shut down and attack me for writing something that supports a Republican, hear me out.

Recently Rand Paul held a filibuster in order to block the nomination of John Brennan as the CIA director. He demanded that Eric Holder and the Obama administration answer a simple question: Can the President authorize a drone against Americans/non-combatants on U.S. soil? The Administration was silent and refused to answer. This did not sit well with the junior senator and Rand Paul set to work via the filibuster. 13 hours worth of talking, with the help of a few others he spoke and spoke and spoke repeating the same question in 101 ways: Can the President authorize a drone attack against Americans/non-combatants on U.S. soil?

More and more we see our rights violated at the hands of the government. Just days ago police entered a man’s house in New Jersey without a warrant because someone reported a Facebook picture of his son holding a gun. My point is simple: it shows that the government can and will violate our rights at their own discretion. Fortunately this man knew to remain silent, he knew not to authorize a search without a warrant, and he knew to have his lawyer on a speaker phone as he spoke to the officers.

Rand Paul addressed this matter on a much higher level. He was asking a much more serious question of the potentially deadly domestic drone program. “Can the President decide that house ABC is a terrorist home and bomb it on U.S. soil without due process?” After a long draw- out filibuster, Eric Holder eventually replied to Senator Paul and said “No, the President cannot.” Rand Paul stood up to the Administration in a very public way, for many hours to ensure that Americans would not be killed under the guise of homeland security. Most Democrats and Republicans showed no support to Paul on this matter. I wonder what does this say about how they feel about our safety and rights?

That’s the thing about Rand Paul, even the Republican party doesn’t favor him. That’s not necessarily a bad thing—he has fresh ideas, he favors smaller government, and his name is coming out more and more ahead of any of the other Republicans. Dinosaurs like McCain do not like him, but again, that’s not a bad thing.

Rand Paul’s latest stand has been his show of support for immigration reform favoring Latinos. He has stated that he supports legalizing the 11 million undocumented immigrants in the U.S. via work visas and with a path to citizenship. He does state that this path would not provide any advantage over other individuals in line attempting to gain citizenship. In a nutshell, he is saying he will not make you leave if you are here working, he will grant you a working visa and allow you to get in line for citizenship behind those individuals that are already in line. This is pretty fair if you ask me.

Most Republicans wanted undocumented immigrants deported, period. The view was that you broke the law entering this country illegally, or overstaying your visa and now you have to get out! There is no debate, you broke the law, you pay the price. Rand Paul is leading the charge within the “new” GOP with his view in support of immigrants.

You have to change with the times. Do you think President Obama was always in favor of same-sex marriage? He was not, but he wanted to keep his job, and showing symbolic support, especially after VP Joe Biden said it first!

One of my major issues with the Republican Party has been their lack of support for homosexuals and their rights to union or marriage. Rand Paul favors traditional marriage, but he believes in leaving it to the states to decide. This topic was a major issue with Romney’s campaign that hurt him dramatically. Not to mention Romney’s being pro-life, which brings up the matter of a woman’s right to choose. Rand Paul is open to debate on this issue as well, and though he believes in the right to life, he’s willing to make exceptions and compromise under special circumstances. The big issue is deciding at what point does life begins after conception.

None of the things I have said may make you vote for Rand Paul, however, he is someone to look out for. Living in a nanny state where the government has full control of everything is not be best for us, but that is where we are headed. If I am right, a guy like Rand Paul may be the one to fix things here at home.

Angel Rodriguez is the publisher of NYCTalking.com, a page that “covers current affairs, business reviews, fashion advice, opinion and commentary, along with random musings from time to time.” Angel is a Bronx boricua, poet, rapper, and a US Air Force vet. You can follow him on Twitter @arodomus

7 responses to “OPINION: Can Latinos Stand with Rand?”