We cannot believe that we are writing about The Real Housewives of Orange County, but here we are, so we might as well jump in. Apparently the show is getting some flak for a segment of last night’s episode when OC Tamra Barney (whoever she is) noted that Eddie Judge, her Latino fiancée, had his “inner beaner just came out” after the couple went to a Mexican restaurant. 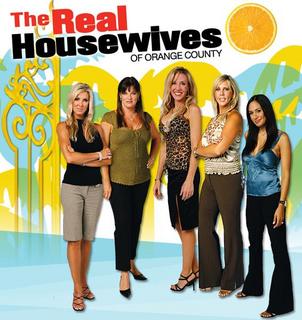 What was interesting about this episode is that Barney was already in damage control when she went to her Facebook page and said the following…. a DAY BEFORE the episode aired:

“After you watch tomorrow [Monday’s] episode and you feel the need to tip me a new asshole for saying “Eddie’s inner beaner just came out” know this..He calls me “his cracker or his honky” and I call him “my beaner.” We’re weird like that! Not Racist!”

Add a few tweets, too:

If I was racist I wouldn’t be getting married to @eddiejudge .Beaner & cracker….those are our nicknames.Relax!

OC Weekly’s Gustavo Arellano really said it best when he wrote the following:

Although I will not pass judgement on the nicknames couples give each other, I still find this entire episode offensive. Honey: “beaner” is SO 1970s. Only people with no sense in reality and Carlos Mencia still use that antiquated term, whether insultingly or endearingly. What are you: some clueless South County type? Oh, wait…

And Eddie? Only Chris Rock can call gabachos “cracker.” Since you’re apparently part-Mexican, get with the Reconquista: if you want to insult your gal with a food term, call her your hot tamale–or, better yet, your concha.

Meanwhile, we asked the National Hispanic Media Coalition about the episode and here is what NHMC President and CEO Alex Nogales told us: “Media has a powerful effect on public opinion. We know that this is an unscripted show and that the couple on the show uses degrading nicknames for each other. Nevertheless, at a time when hate speech and hate crimes against Latinos are at an all time high, we expect the producers of the show to be responsible about what they allow to go on the air.”

As for those who tell us that we are so “sensitive,” no, we are not getting over it. Leave the private talk to private conversations. Once you are on TV, anything is fair game, cracker.