NISGUA (Network in Solidarity with the People of Guatemala) filed the following Day 22 report of the genocide trial of former dictator Efraín Ríos Montt and ex-intelligence chief Mauricio Rodriguez Sánchez in Guatemala City. They have given us permission to republish all their reports about this historic trial.

In a context of legal uncertainty as appeals and resolutions make their way through the Guatemalan courts, Judge Jazmín Barrios reconvened the public hearings of the genocide trial on April 30. Proceedings had been suspended for almost two weeks, during which a whirlwind of legal battles and public demonstrations about the historic genocide trial took place.

The abbreviated proceedings were just over two hours long and focused primarily on fulfilling procedural requirements for the restart of the trial and responding to defense motions. Ríos Montt appeared with defense lawyer Francisco García Gudiel, while Rodríguez Sánchez appeared without his original defense attorneys. The defense counsel for both parties staged a dramatic walkout on April 18, after which the court assigned them public defenders. Court appointed counsel, Lidia Arévalo and Otto Martínez, were present at the defense table on Monday and were officially integrated as Ríos Montt and Rodríguez Sánchez’ (respectively) lawyers at the outset of the hearing. 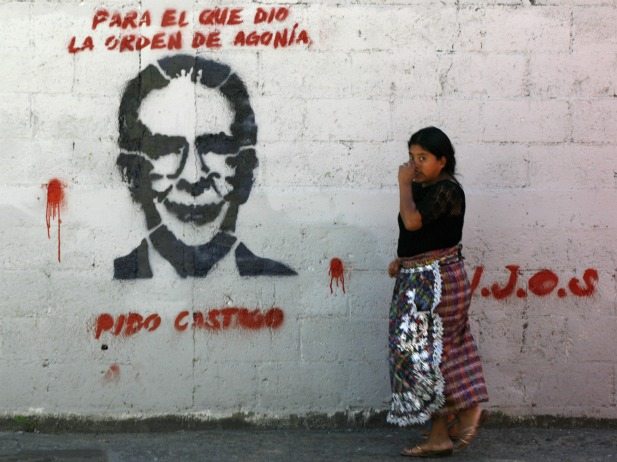 Gudiel, who was expelled from the courtroom on March 19, was officially reinstated as Ríos Montt’s defense lawyer, as ordered by the Constitutional Court. He immediately filed a motion to annul all proceedings that had taken place without him, stating he could not adequately represent his client as he was not present for all hearings. The judges rejected Gudiel’s motion, citing the resolution of the Constitutional Court that “it would be illegal to reverse [the proceedings] to a prior stage.” She also indicated the need to “avoid the re-victimization of the witnesses who have already testified.”

Public defender Lidia Arévalo requested and was granted permission to leave Ríos Montt’s defense, at which point Rodríguez Sánchez addressed the court. “I believe the law supports me in having trusted counsel,” he stated. “This lawyer is not my trusted [counsel].” Public defender Otto Martínez followed with a motion asking to be dismissed from Rodríguez Sánchez’ defense, “He didn’t want to share anything at all about the case with us because he said we were not his trusted counsel.” Public prosecutor Orlando López objected, “This is an excuse to delay the process.”

After deliberations, Judge Barrios announced she would not recuse public defender Ramírez. She named the various opportunities Rodríguez Sánchez had to appoint new counsel and reiterated that he could not be left without a defense attorney. Barrios reminded him that when his counsel abandoned the hearing on April 18 he stated he had no financial resources available to contract a new lawyer and therefore the court appointed him a public defender.

Judge Barrios then continued with the procedural point of re-reading the charges to Ríos Montt, in accordance with recent Constitutional Court rulings. The full charges of genocide and crimes against humanity were read, and as a formality Ríos Montt was called to the stand to state his personal information. He was also given the opportunity to respond to the charges. Just as he had on the first day of the trial, Ríos Montt stated he understood the charges and declined to respond.

Judge Barrios then adjourned court for the day and convened all parties to appear on May 2 at 8:30am. She instructed Gudiel to produce the remaining six defense witnesses and video evidence at that time. Defense lawyer Ramírez interjected to repeat his request for a 5 day suspension of the trial in order to familiarize himself with the case. Judge Barrios stated his request would be considered on May 2.

After a tense week and a half of trial suspension, the restart of genocide trial proceedings has been cause for tentative hope on behalf of the survivors and their legal representation. It remains to be seen what impact pending Constitutional Court resolutions and probable motions by the defense will have on the future of the trial.

One response to “Genocide on Trial, Day 22, April 30: Trial Reconvenes and Attempts to Move Forward”