Last week an online group called Concerned Chicagoans went online to publicly criticize a neighorhood-wide “Derby de Mayo” celebration being held in several Lincoln Park establishments. You can read more about what they wrote here, but essentially the CC post  asked readers the following: “What we ask is that folks think critically about the Chicago community. We are not post-racial. If we look at the make-up and hardships (or lack of hardship – based on where you live), you can easily tell and feel the racial division and injustice in this city. Events like “Derby De Mayo” are manifestations of countless institutional forms of racism that have kept Chicago decades behind the majority of cities in this country particularly in regards to racism and segregation. Please think of the following questions: Do these participating companies deserve our business when they are supporting events such as these that contribute to the dehumanization and hurt of an entire people and culture? What are ways we can prevent these acts of ignorance and intolerance to push our community forward? That is for you to decide. This is something Chicagoans have wondered about and hurt over for generations.”

The post elicited the following letter from John Corry of Four Farthings Tavern & Grill, one of the bars promoting “Derby de Mayo.” CC published the letter, and we are reproducing it here. We have already read it several times, and we continue to marvel at its ignorance. Here is the letter, unedited:

I appreciate your concern and I can see how the idea of a Cinco De Mayo pub crawl may seem offensive to you. As a christian I share the good will and celebrations of Christmas with everyone regardless of their religious affiliation. As an Irish American, I share the most celebrated day in our country which is St Patrick’s Day where many people drink and wear green and have no idea what the day is truly about. At Halloween, kids and adults dress up in many offensive costumes and drink to excess at parties. On Mexican and Puerto Rican Independence days I see Mexican and Puerto Rican flags waving outside cars for about three days and it is happening in AMERICA which I 100% am offended by! Now if you can tell me in your heart of hearts that you or anyone in your concerned Chicagoan group have never participated in any of the above mentioned events, then I will consider pulling out of this event.

My point is that these events are just another reason to have a party and people aren’t thinking any deeper than that. I do not get offended when people depict all Irish as drunks on t-shirts or on party invitations because I know their hearts are about the celebration. One thing to note, We are simply participating bars. We are not the creators of this event. Our job is to bring people in our doors and events like this do just that. If we felt like this was disrespectful then we wouldn’t participate.

I appreciate you sending us all this note to express your concern about the Derby de Mayo pub crawl. So you are aware, we are not the organizers of this event. We are participating bars. Our job is to fill our bars with fun events for people to enjoy. If we thought for a moment that an event was in any way overtly offensive to the general population, we would not be participants.

There are many local and national Holidays which emanated from countries across the globe which are celebrated every month and year, here in the United States. Almost all of them have been bastardized into parties and/or drinking celebrations regardless of their original intent. The Christmas season has been completely commercialized to the point where it is celebrated by anyone regardless of their religious belief. As a Christian I am unhappy with this but not insulted. As an Irish American I don’t like the depiction of the drunk Irishman that I see all over t-shirts and St Patrick’s day parties yet I am not offended because I know people are just thinking about the party. I am intelligent enough to know that people don’t look at me as an Irishman and prejudge me as a drunk. On Halloween there are children and adults alike wearing costumes which may be considered offensive to many different groups of people and again we all know that it is about the celebration rather than an overt insult to a particular group or person.

If you can tell me, in your heart of hearts that you or no one in your group of concerned chicogoans has participated in any of these events then I stand corrected. I will tell you that as an American, on Mexican and Puerto Rican Independence Day I am 100% offended when I see the display of Mexican and Puerto Rican flags outside of cars driving down the street and hanging above or as a temporary replacement of American flags on homes or businesses. The reason I am offended is because every American outside of native Americans, came from someplace else. We all took a pledge that we would make AMERICA our home and protect and rally around each other collectively! We did not make a pledge to rally around only “our” nationalities. It is insulting an un American to have a celebration for our former countries independence when we have our own Independence Day! If you are an American, YOUR Independence Day is July 4th! Now you can say it is “just a celebration” which makes your argument against our Derby De Mayo the same defense as mine. America is under constant assault from every other country and many of it’s own citizens for almost everything you can think of to the point where we have become handcuffed with political correctness. This is a celebration of the Kentucky Derby with a mix of Cinco De Mayo. The wearing of sombreros and mustaches is part of that celebration not a purposeful racial swipe at Mexico or people of Mexican Heritage.

You and I are not blind. We both know and see racial injustice on a daily basis. I can tell you that it has improved since I was a kid and It is still improving. There will always be jerks and racists and bullies in our world even 100 years from now. There will always be disagreements like the one we seem to be having now. The most important thing is dialogue and understanding. I don’t agree with you celebrating an Independence Day for a country you are no longer a member of but I know the intent is a celebration. You don’t agree with us participating in a Derby de Mayo celebration with people wearing sombreros and mustaches but I am assuming that you know it is simply about a celebration. Thank you again for your note.

We won’t begin to address many inaccuracies the letter contains, since we believe that our readers are pretty sharp and can figure it out, but apparently Corry seems to fall under the “I’m no racist but why the hell are all you Mexicans celebrating an independence day, along with you Puerto Ricans” camp. We would think someone would just give Corry a lesson or two about actual facts. He has every right to defend his opinion, but a little education goes a very long way. 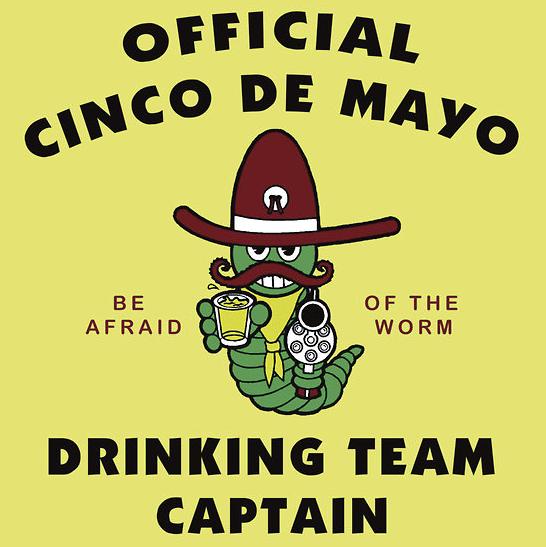 As for Cinco de Mayo? It’s pretty clear that it continues to go down a slippery road. We do wonder why people think that dressing up in “Mexican” gear is cool, because during St. Patrick’s Day, for example, we might see may green t-shirts, but very few people in leprechaun costumes. Why is this happening with Cinco? We are all for fun and good times, but when we are out during Cinco festivities, the scene still makes us uncomfortable. So we wind up just mocking the ignorants and hoping that one day we can just see more “Kiss Me, I’m Mexican” shirts than sorority girls in mustaches and sarapes.

Finally, how would this world react if we all decided to have “Blackface Drinking Parties?” Would we be seen as being “too sensitive?” We doubt it. So why do we continue to allow it for Cinco de Mayo? What are we afraid of? Some bar guy from Chicago who has no clue? Yeah, right. In the meantime, here’s to the day when this will all go away. It will happen. Slowly but surely.