Ríos Montt: Guilty of Genocide and Crimes Against Humanity

Here is the on-the-scene report submitted yesterday May 10 by NISGUA, the Network in Solidarity with the People of Guatemala. For all other posts of the Efraín Ríos Montt genocide trial, visit NISGUA here. NISGUA gave Latino Rebels permission to republish their posts from the trial.

Today in Guatemala, Judge Yazmin Barrios found former dictator Efraín Ríos Montt guilty of genocide and crimes against humanity. The court ratified all the elements of genocide described by witness and expert testimony, concluding that Ríos Montt had both command authority and “full knowledge of what was happening and did nothing to stop it.”  Ríos Montt was sentenced of 80 years in prison and is now in police custody. Former intelligence director Rodriguez Sánchez was acquitted of all charges. 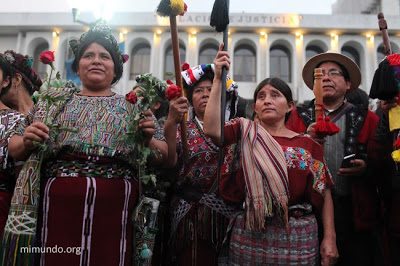 The historic sentence was greeted by cries of “Justice!”, the singing of hymns, and emotional displays of appreciation by Ixil witnesses and other members of the public. “After so much struggle, we’ve finally achieved our goal,” said a member of the Association for Justice and Reconciliation.

Although the court’s ruling is sure to be subjected to ongoing challenges, now is not the moment for doubt. Now is a moment to fill our hearts in celebration of the years of dedication and toil that have led to this victory. It is a time for solemn remembrance of the many who have not lived to see justice, but in whose names this struggle has been carried forward.

Today proves that the bonds of solidarity and memory can triumph over violence and forgetting, that the humblest commitment to truth and justice can in time tear down the wall of impunity.

From the bottom of our hearts we thank you for your constant vigilance and accompaniment of the survivors, witnesses, and human rights defenders that have made today possible. We ask you to deepen your support in the coming weeks, months, and years as struggles for justice and self-determination in Guatemala continue in the face of threats both new and old.

Above all, we ask that you join us in celebration, in raising our voices worldwide in a chorus of justice.

In enduring and grateful solidarity, the entire NISGUA team, now and over three decades in solidarity with the people of Guatemala.

One response to “Ríos Montt: Guilty of Genocide and Crimes Against Humanity”