Pierluisi: Puerto Ricans Living on Mainland Should Not Be Allowed to Vote on Island’s Status

On May 15, Puerto Rico’s Resident Commissioner Pedro Pierluisi (D), a non-voting member of the U.S. House of Representatives, submitted the following bill to Congress:

Full Text Below is a simple rendition of Congress’ official bill text.

1. Short title
This Act may be cited as the Puerto Rico Status Resolution Act.

Do you want Puerto Rico to be admitted as a State of the United States? Yes__ No__”

Pierluisi made an appearance today on Univision’s “Al Punto” with Jorge Ramos to discuss the bill. Besides stating his case for the bill, Pierluisi did say the estimated 4 million Puerto Ricans living on the U.S. mainland should have a say in the statehood bill, and that current Governor Alejandro García Padilla, who favors the island’s current commonwealth system, is not allowing the voice of the Puerto Rican people to be heard. 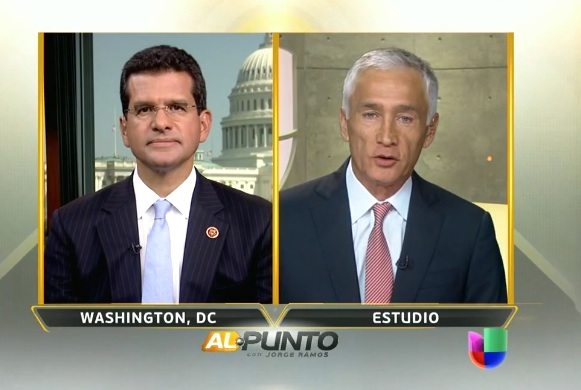 Here is the video in Spanish.

Pierluisi and Ramos spent considerable time on especially the criticisms of the bill. Members of Pierluisi’s own pro-statehood party, including former governor Carlos Romero Barceló, believe that the bill leaves it way too open to allow Puerto Ricans living on the mainland to vote in a final binding plebiscite. Rep. José Serrano (D-NY) believes that mainland Puerto Ricans should be allowed to vote.

This is what Pierluisi told Ramos, “The decision must be in the hands of Puerto Ricans living on the island, 3.7 million American citizens residing in Puerto Rico.”

Pierluisi also did not support Rep. Luis Gutiérrez (D-IL), who believes the statehood bill is heavily biased towards a statehood option.

“In a democracy, at least in America, you vote where one resides. At the moment, one may consider whether Puerto Ricans in the diaspora could also express their views, but usually, what always happens is that you vote where you live.”

In the end, Pierluisi’s words were still very vague, and it is clear to us that this topic is no way near resolved, especially if Serrano and Gutiérrez are involved.

5 responses to “Pierluisi: Puerto Ricans Living on Mainland Should Not Be Allowed to Vote on Island’s Status”