Earlier in the spring, our publisher wrote a piece about the irony of Rick Santorum hoping that an undocumented German homeschooling family would win an asylum case and not get deported back to Germany. 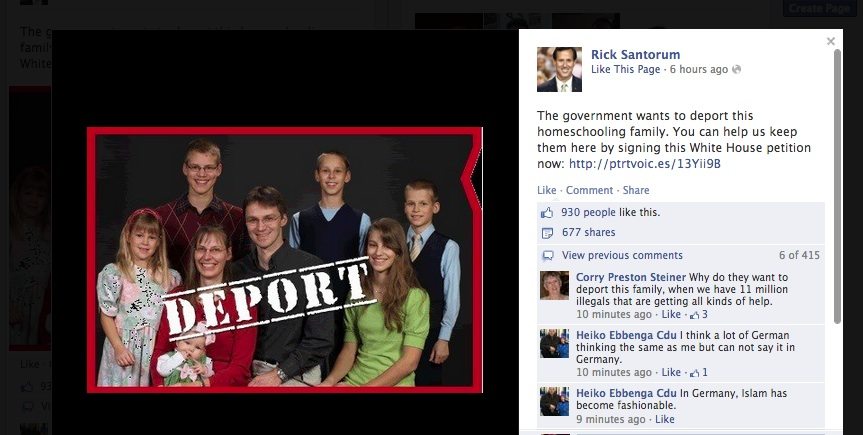 Looks like Santorum’s pleas and the pleas of many U.S. homeschooling families didn’t get heard. Last week the 6th U.S. Circuit Court of Appeals, based in Cincinnati, denied the Romeike family a request for political asylum.

A German family seeking asylum in the U.S. so they can home-school their children lost their appeal in federal court on Tuesday (May 14), but their lawyers say they’re prepared to petition the U.S. Supreme Court to take the case.

The German government persecuted the Romeike family for their faith, said Mike Donnelly, a lawyer with the Home School Legal Defense Association, a religious organization that is representing the Romeike family.

“It is treating people who home-school for religious or philosophical reasons differently,” he added.

The Cincinnati-based 6th U.S. Circuit Court of Appeals disagrees. The U.S. grants safe haven to people who have a well-founded fear of persecution, but not necessarily to those under governments with laws that simply differ from those in the U.S., Judge Jeffrey Sutton wrote in the court’s decision.

“The German authorities have not singled out the Romeikes in particular or homeschoolers in general for persecution,” he wrote for the three-judge panel in the case, Uwe Romeike v. Eric Holder, Jr.

Uwe Romeike said in an email on Wednesday that his family began home schooling to protect their children from bullying and teachings they didn’t agree with.

“As we were confronted with opposition to our choice we began to feel more and more that our faith required us to homeschool our children,” he said.

Uwe and Hannelore Romeike moved their five children to Tennessee (a sixth child has since been born) in 2008 to escape thousands of dollars in fines and increasing pressure from local police and education officials to enroll their children in school. All German parents are required by law to send their children to a state-recognized school, whether public or private.

FYI: The Romeikes are still undocumented, not matter how you spin it. Life sure is tough sometimes. Here’s hoping the Romeikes talk about the other stories of undocumented families who face deportation every day when the German family appeals the decision to the Supreme Court. Amazing how they can do that, while thousands and thousands of other families living in the shadows can’t.