In a May 26 video report from RT America, attorney David Cohn said that the in-custody death of David Sal Silva was just another example of troubling police misconduct in Kern County, California. 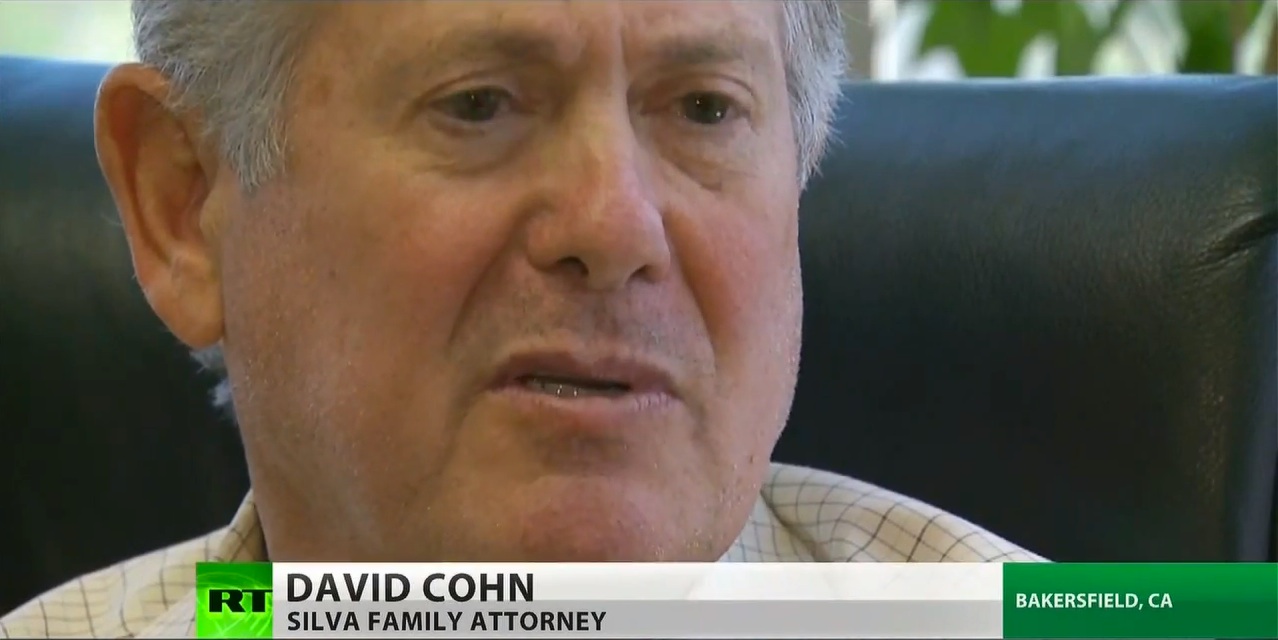 “For too long the Kern County Sheriff’s Department strikes first and asks questions after the fact,” Cohn said in the report, which is posted here.

Cohn also addressed and challenged the conclusion announced by Kern County Sheriff Donny Youngblood last Thursday that Silva’s death was ruled accidental in the case’s autopsy report and was caused by a heart attack. A grainy security video allegedly shows police striking Silva with batons. Cohn mentioned that Silva was “simply covering up and trying to prevent injury to himself as these blows and dog bites are being inflicted on him.”

“I believe the first responder was a canine officer, and he responded by I believe trying to rattle [my son] up. At some point [the officer] got the dog out of his car, and the dog was mauling David, and from everything that I could see, it looked like at some point that there were several officers just wailing away at him with batons, and it looked like they were doing batting practice.”

Silva’s father said that police officers murdered his son “on the street,” and he believes that Sheriff Youngblood was “an accomplice to murder.”

An initial review of the opening pages of the autopsy report already raise several questions, particularly in the first part of the report, which was the running commentary of the crime scene and when the coroner arrived at the scene, and the conclusions made about cause of death. 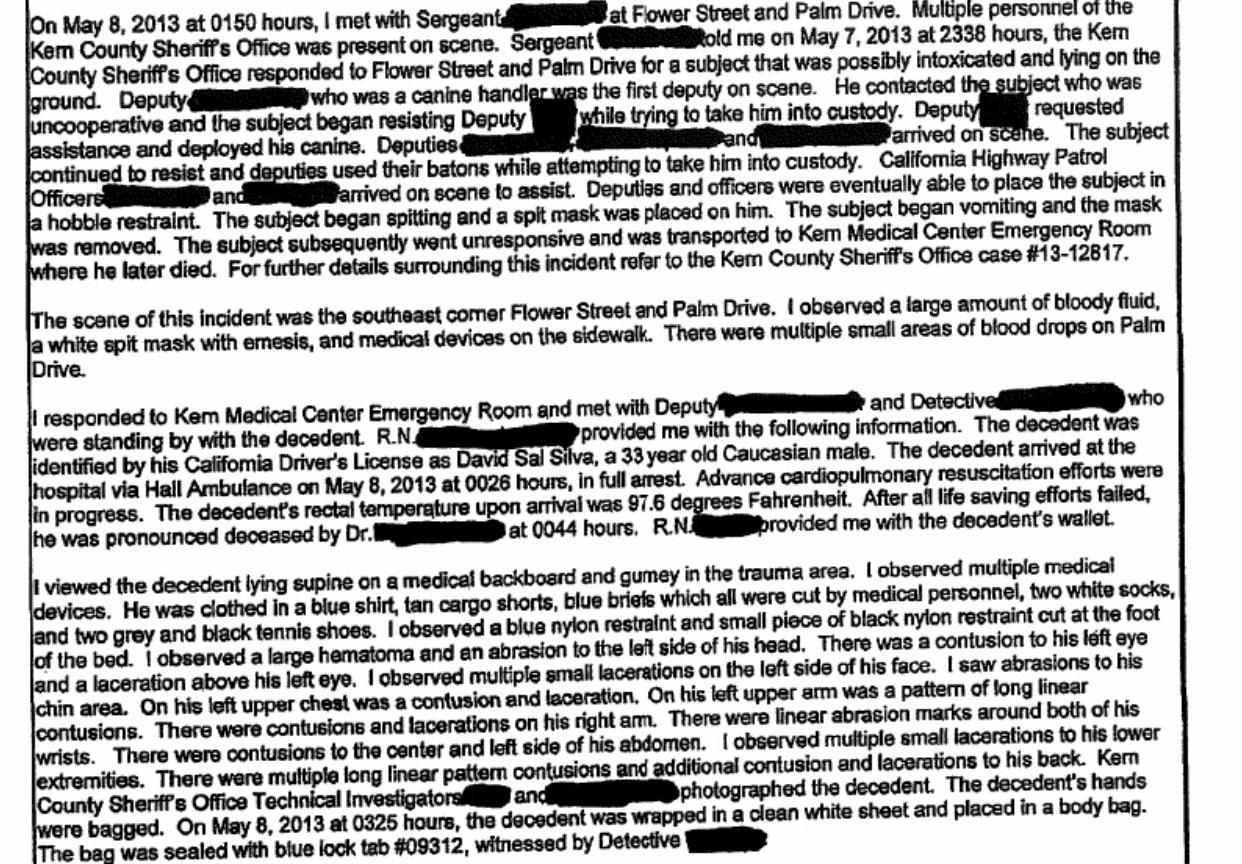 The paramedic also said that he saw Silva “lying on the ground, on left side…. He was handcuffed behind back and deputies and officers were tying a blue restraint around his feet. As [the paramedic approached], deputies told him that [Silva] was unresponsive. [The paramedic] said he saw a large amount of emesis [vomit] on the ground. He checked for a pulse which was absent. He turned [Silva] to a supine position and initiated cardiopulmonary resurrection efforts. He said after one round of chest compressions he requested deputies removed the restraints. Deputies removed the handcuffs and the leg restraints. [Silva] was transported to the hospital. [The paramedic] told me that [Silva] did not have any cardiac activity on the monitor.”

So, the coroner’s initial observation of the body is one with lacerations and contusions. The area had bodily fluids and several drops of blood. There is no mention of dog bites. There is also a 33-minute window between when the first officer—a canine officer—arrived and when the paramedic arrived. What happened in those 33 minutes? Did David Silva have a heart attack naturally? Was it just accidental?

Later in the Diagnoses section of the report, the coroner was quick to list Silva’s health issues and a “history of resisting restraint procedures,” although according to Silva’s father, all he ever got in trouble for was one incident of disturbing the piece. Point 4 says that it was a “sudden unexpected death,” even though point 6 says that Silva’s body appearance was “obese,” but that of a “young and strong individual.” Point 11 says that there were “signs of blunt force trauma to the left side of the anterior head,” but in point 12, the coroner was quick to rule that there were “no signs of baton strikes to the head.” Then in point 13, the coroner writes this, “Mild bruising of upper right posterior lateral wall of the pharynx consistent with blunt force trauma, more likely due to intubation, but blunt force trauma during restraint procedures cannot be ruled out.” Point 14 mentions “non-lethal dog bite signs,” and point 15 lists “non-lethal baton mark signs,” with point 16 saying “bruises, abrasions and tears of the skin, mild, non-lethal.” The report cannot rule out “blunt force trauma during restraint procedures.” Maybe that one phrase could hold the key to the truth. And even though most of the report discusses the injuries Silva sustained, we wonder why his medical history was so front and center in the Diagnoses section. 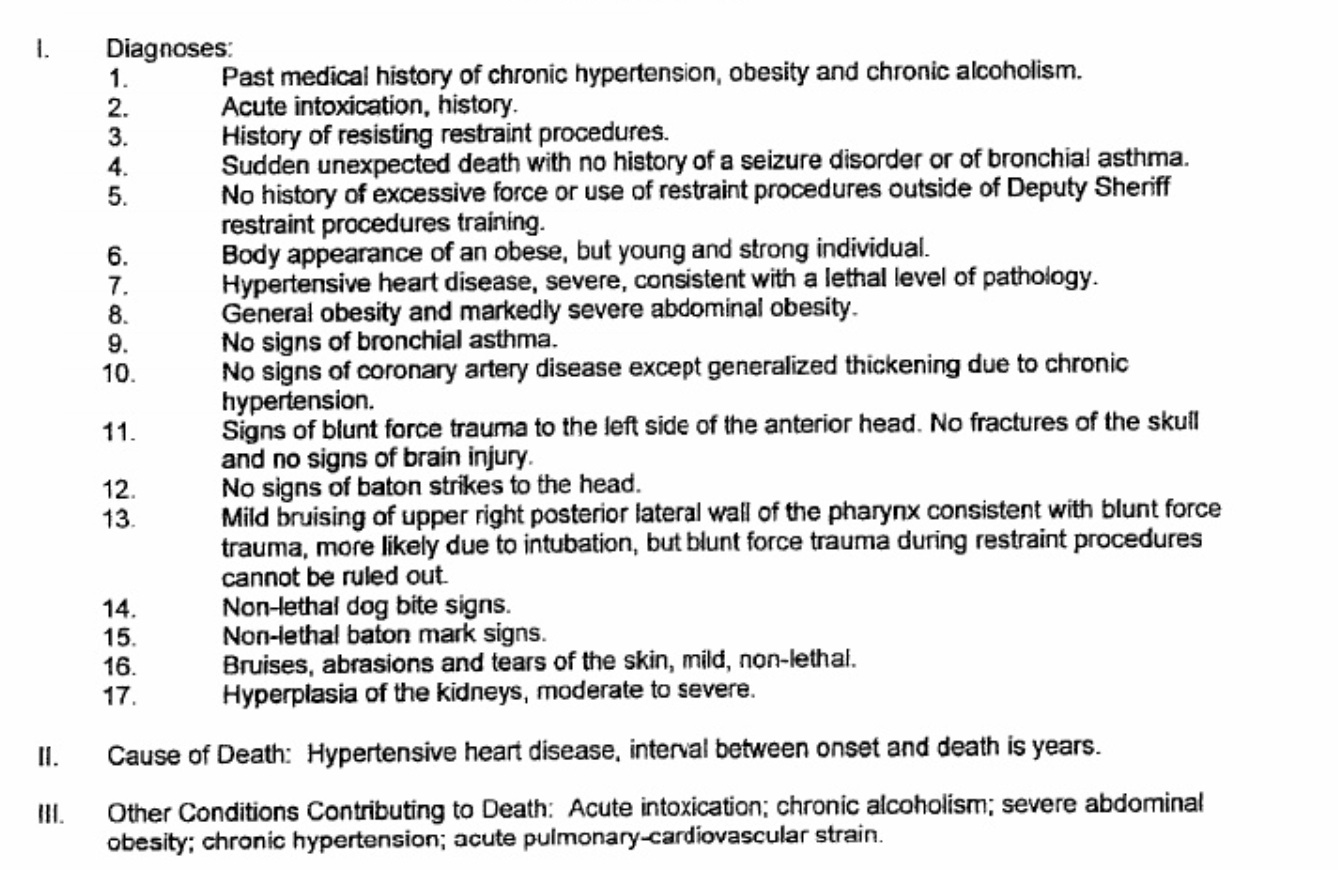 Finally, an additional section of the report continues: “The body is covered with blunt force injuries of a fairly superficial natures. These areas consist of abrasions and bruises. No fractures are detected. The most prominent areas of injury are to the left forehead and left anterior side of the head. The skin in this area is bruised and is further distinguished by a few small abrasions. The underlying skull and brain are unremarkable. There is a small area of bruising of the upper right posterior pharynx over the right of the lateral posterior right thyroid cartilage. This is often seen as a consequence of intubation and there are no small bone fractures of the next. There are no signs of blunt trauma to the anterior cervical fascia of the cervical spine. There are no petechial hemorrhages of the eyes and/or lids. There are several areas consistent with dog bites. None of the areas have injuries into vessels consistent with significant bleeding. None of the dog bites can be considered lethal. None of the injuries to the body are at a level of pathology considered to be lethal.” Talk about making sure you don’t want people to think that dog bites and baton blows were not lethal, or did not cause Silva’s heart attack.

So did David Silva really die from a heart attack that had NOTHING to do with what happened to him at the hands of policer officers for 33 minutes? You decide for yourself. We have already made our decision, and this case is so troubling, we are still amazed that is has yet to get wall-to-wall national attention. Maybe that will change.