Even after MillerCoors decided to stop production of an official National Puerto Rican Day Parade beer can that has gained national attention through social media, community activists and local New York City politicians of Puerto Rican descent continue to call for the resignation of the the parade organization’s chairperson and its current board of directors.

The decision by MillerCoors to no longer produce the beer cans happened just a few hours before Boricuas for a Positive Image, community leaders, and their supporters were to hold a demonstration in front of a local Coors distributorship in The Bronx. Here is what MillerCoors wrote to BFPI: 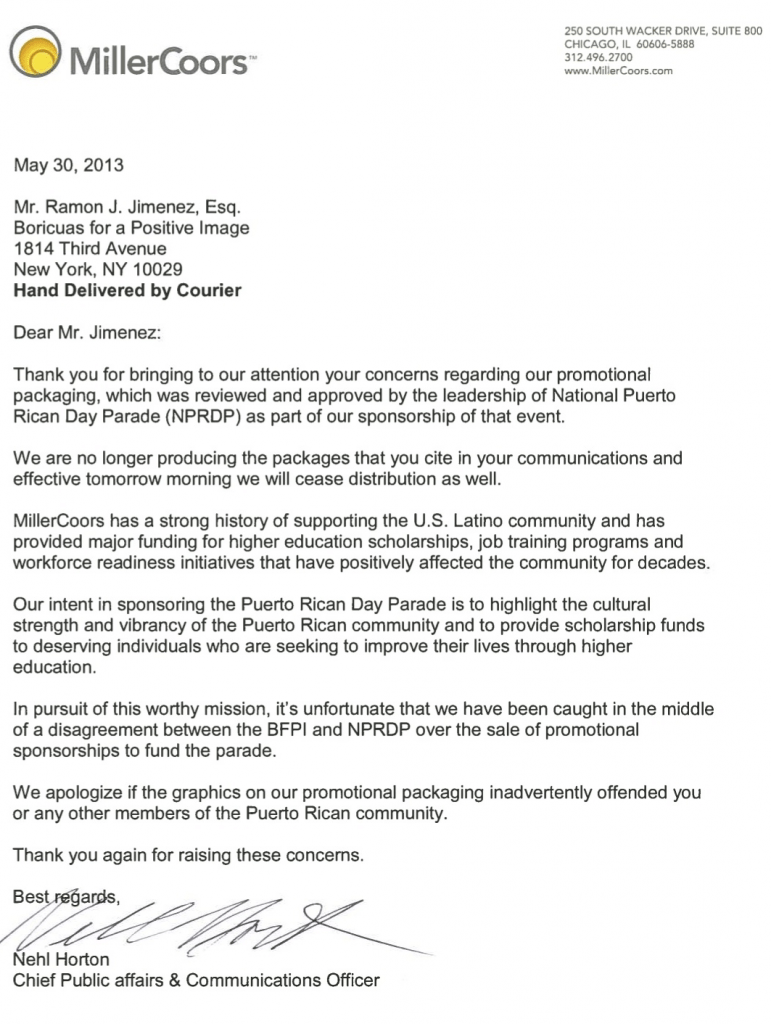 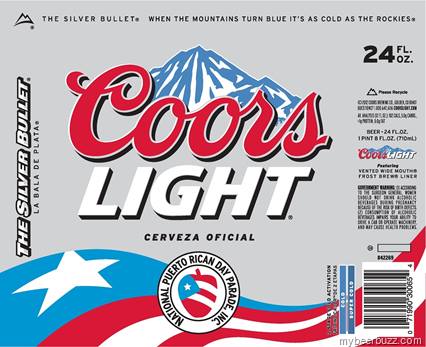 Both these statements did not stop the BFPI campaign nor local city politicians critical of the beer can, including councilor Melissa Mark-Viverito, who issued her own statement: “Today’s announcement that Coors will cease all production of products bearing the Puerto Rican flag is yet another incredible victory for our community, which was brought about solely by sustained pressure at the grassroots. The National Puerto Rican Day Parade’s irresponsibility in not only authorizing this campaign, but then dismissing the community’s response has been deeply disturbing and calls for a re-evaluation of the Board of Directors’ leadership.”

Mark-Viverito also appeared this afternoon at a rally for the BFPI campaign. In this video clip, she calls for Lugo’s resignation and the formation of a new board of directors.

This evening Latino Rebels interviewed Tato Torres, a member of BFPI. Here is what he told us via email:

How has the community response been to your campaign?
TORRES: I believe that, considering the poor or lack of general response in the past, the overall response has been much better than one could expect, anticipate, or hope for. Especially from community organizations and elected officials. One has to keep in mind the unfortunate overall lack of historical knowledge and collective self-awareness of the Puerto Rican community, especially, although ironically, in NYC and throughout the Diaspora. And we must remember the immense popularity of the Parade as a source of “pride,” even if it is indeed a misguided one.

Critics have said that you are overreacting?
TORRES: Again, “One has to keep in mind the unfortunate overall lack of historical knowledge and collective self-awareness of the Puerto Rican community, especially, although ironically, in NYC and throughout the Diaspora. And we must remember the immense popularity of the Parade as a source of “pride,” even if it is indeed a misguided one.”

How would you respond?
TORRES: One has to educate… of course, much easier said than done…, but the challenge is to awaken true awareness and collective self-knowledge by providing relevant historical facts and making real or hypothetical comparisons with other groups.

What is your final end goal here?
TORRES: In my opinion, we must demand not only that our many questions reagarding the Parade be answered, but that Madelyn Lugo accepts her responsibility as Chair of the NPRDP and that the contract with GALOS Corp. be seriously re-evaluated by the current or perhaps a new Board of Directors. It is truly shameful to see how irresponsible the NPRDP has become or has always been, and it is time to hold it accountable to those who they supposedly represent and in whose name they function, ALL Boricuas and NOT individual greed and private interests. Although Madelyn Lugo apparently micromanages and rules with an iron fist all NPRDP business, it is the Board of Directors of the NPRDP which technically and legally has the real administrative power and responsibility over the Parade and its operations. I personally believe that they MUST be pressured to (1) remove Madelyn Lugo as the Chair of the NPRPD, Inc. and (2) review & reconsider the role of GALOS Corp. and their unethical contract. We, as a Community MUST pressure the Board of the NPRDP to force Madelyn Lugo to step down as President and accept nominations from the Community to place genuine and qualified representation in those seats.

Is the campaign’s focus more on MillerCoors or on the organizers of the NPRDP?
Now that, after folding to community pressure, Coors has vowed to stop production on its Puerto Rican-themed can, as it pulled the “emBORÍCUAte” ads two years ago, we can again celebrate a significant victory, but definitely not rest on our laurels. We have been here before and we must make sure we do not find ourselves here again!

Ultimately the real responsibility and blame does not fall upon Coors Light. The true culprits here are first, GALOS Corp., which is the official marketing agency responsible for all corporate participation in the National Puerto Rican Day Parade Inc. Its president, Carlos Velásquez, who is not even Puerto Rican, has worked for over forty years with the National Puerto Rican Day Parade and the former New York Puerto Rican Day Parade during the infamous Ramón Vélez era, in numerous roles from board member to advisor and now as the parade’s sole connection to the private sector. GALOS manages and produces the Parade, and was actually responsible for giving MillerCoors the green light to go-ahead with the “emBORÍCUAte” publicity campaign two years ago. Equally, or even more guilty, is Ms. Lugo, who by not protecting our the Parade and our community’s dignity from corporate greed has, in my opinion, put a price tag on Boricua “SELF ESTEEM” (ironically, the official slogan of the Parade. see their registered logo). She has practically served as a rubber-stamp for GALOS and its culture-pimping of the NPRDP. I also question the role or lack thereof in the matter, of Rafael E. Domínguez, member of the Board of Directors of the National Puerto Rican Day Parade Inc. and who serves as its Director of External Affairs, a position, which in my opinion, also makes him at the very least partially responsible.

Finally, the New York Daily News is reporting tonight that New York’s attorney general is launching an investigation about the relationship MillerCoors has with the NPRDP:

The state attorney general’s office is investigating a beer behemoth and the National Puerto Rican Day Parade in the wake of a scandal over cans displaying the Puerto Rican flag.

Coors Light tried to can the controversy Thursday, vowing to stop production on its Puerto Rican-themed can after outcries from a local community group.

But the state’s top lawman, Attorney General Eric Schneiderman, wants to know more about how the beer brand using the popular parade to market its suds.

Schneiderman’s office sent letters to MillerCoors and the Parade leadership on Wednesday and Thursday demanding to know how exactly the beer company has supported good works by the parade.

“MillerCoors’ sponsorship of the 2013 Parade has raised concerns about how the charity is being used to market and sell alcoholic products, especially in light of the 2013 Parade’s theme, ‘Celebrating Your Health.’” the AG’s office wrote to MillerCoors Thursday.