I knew almost immediately that when a story from offthegridnews.com began with this headline, “U.S. Food Stamps In Puerto Rico Costing You 2 Billion Dollars,” readers weren’t going to get much actual real information about Puerto Rico and its relationship with the United States.

That was pretty much confirmed when the piece’s author, Tara Dodrill, last night included the following photo of “Puerto Rico” (FYI, that’s the Philippines and there is a rail in the street, which doesn’t exist at all in Puerto Rico) as the featured image of the story:

That photo of “Not Puerto Rico” was replaced later with this photo, one that is widely used: 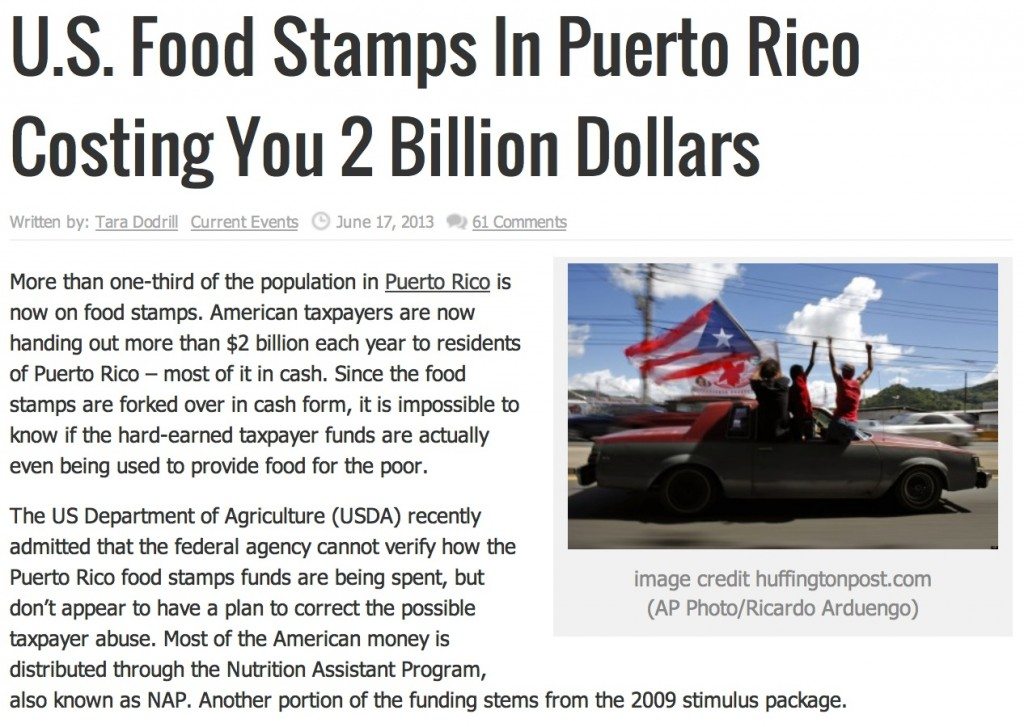 So now we know the initial intentions of the piece, which confirms that Dodrill was just going to write drivel about Puerto Rico and create the myth that Puerto Ricans are a bunch of foreign Third World moochers. Yet in the interest of taking a moment to respond to yet another example of how some Americans have no idea about Puerto Rico and Puerto Ricans, I will share a few more thoughts about Dodrill’s sham of an article.

Do Puerto Ricans living on the island pay federal taxes? Yes. Let’s stop that myth right now. It’s just not true. Here is what the IRS has to say:

Special rules apply to civilian spouses of active duty members of the U.S. Armed Forces who work in Puerto Rico but retain their tax residency status in one of the 50 states or the District of Columbia under the Military Spouses Residency Relief Act. If these spouses’ Puerto Rican income is only from wages, salaries, tips, or self-employment, they will only file a U.S. income tax return. For more information on how MSRRA applies to civilian spouses, refer to Publication 570 and Notice 2012-41.

If you are a bona fide resident of Puerto Rico and qualify to exclude your Puerto Rican source income on your U.S. tax return, you must determine your adjusted filing requirement based on the filing thresholds shown in the tax return instructions. For more information about how to determine the amount of income that requires filing a U.S. income tax return, refer to Publication 570 and Publication 1321 (PDF).

Also, since we are still talking about federal taxes, the IRS also says this: “Employers in Puerto Rico are subject to the taxes imposed by the Federal Insurance Contribution Act (FICA) (Social Security and Medicare taxes) and the Federal Unemployment Tax Act (FUTA). An employer is a person or organization for whom a worker performs services as an employee. As an employer you are required to withhold, report, and pay employment taxes on wages paid.”

Wait a minute, Puerto Ricans serve in the U.S. military? They’re not foreigners? Yes. In fact, Dodrill should be praising those who do serve and protect her right to write ignorant articles that suggest that Puerto Ricans are just a bunch of foreign Spanish-speaking poor people who live on the other side of the tracks and are just taking advantage of the system. Maybe Dodrill should read this piece from 2004: “Soldiers Can Die But Can’t Vote; Puerto Ricans Serve Without Representation,” which pretty much sums it up perfectly.

Is Puerto Rico a welfare state dump? Seriously? I have to address this one? Ok, I will. Yes, the island has problems, both in crime and unemployment, but I believe that this has to do more with the political status issue that has dragged on for decades and the island’s mediocre politicians who have placed status over the real issues surrounding Puerto Rico. I do agree with what Resident Commissioner Pedro Pierluisi told the United Nations this week that the island’s current territorial (yes, colonial) status is the “root cause” of its problems, but I am equally disappointed that Puerto Rico’s current and past leaders aren’t working together to solve the status issue. Instead, they just keep bickering and blaming each other. It also does not help when the island’s own governor Alejandro García Padilla claims that if Puerto Rico were to become a state of the Union, it would turn into a “Latin American ghetto.” Comments like that play right into Dodrill’s thesis, which is also implied in posts by the likes of Alex Jones’ InfoWars. So García Padilla just gave Alex Jones even more fodder to justify InfoWars’ views on Puerto Rico as being a backward welfare state instead of promoting what is good about the island and what Puerto Rico offers. Thanks a lot, governor.

Let’s be real for a minute: the current political system in Puerto Rico is broken. The status quo no longer works. Right now, those who believe in Puerto Rico’s future and potential must be attentive to the misinformation that is being shared online through so-called “alternative journalism” sites. Dodrill’s “story” clearly suggested that “foreigners” are taking away “YOUR hard-earned tax dollars,” when in fact, that is just not true. However, this type of content will continued to get shared and it is the biggest reason why I tell my pro-statehood friends that a very small yet influential group of Americans will do anything to discredit their statehood efforts and say that the United States should not take on a “Latino welfare state” full of Spanish-speaking people.

It is critical that Puerto Ricans of ALL political stripes start becoming Pro-Puerto Rico first and foremost. Take off your status badges now. We MUST be ever so vigilant of how the rest of the world views us, and when we see problems that ignorantly portray us, we must act together and feverishly defend ourselves. This is not about political status —let’s leave that debate for later— this is about working together to change how the rest of the United States views Puerto Rico and the 8 million of us who form part of the American fabric. And that perspective is one that is bilingual, bicultural, sometimes American, sometimes Puerto Rican. It is what makes us so unique. It can be our greatest strength, but also our greatest weakness. Yet it is purely Puerto Rican, and that is what we need to share, now more than ever.

Does the island have serious economic and social problems? Yes, and those problems will be tackled if the island’s bitter political struggles disappear, when we start promoting new industries on the island and move away from what is and what will always be a colonial system.

But does Puerto Rico also have millions of proud boricuas who can and will speak out against imbéciles like Dodrill and Jones? Of course we do.

Let’s defend Puerto Rico at all times. Let’s make sure that the our authentic narrative is being shared online more and more so that our house is united and in order. Then we can worry about how the inside of our house will look like eventually.

I am, and I will always support any fellow portorro who puts Puerto Rico first.