This afternoon in the Senate, 68 senators voted in favor of the Border Security, Economic Opportunity, and Immigration Modernization Act, with 32 senators opposing it. Bill S.744 will now move to the House of Representatives for debate and a final vote. If the bill or some form of it passes the House, it would then be sent to President Obama for final signature into law. 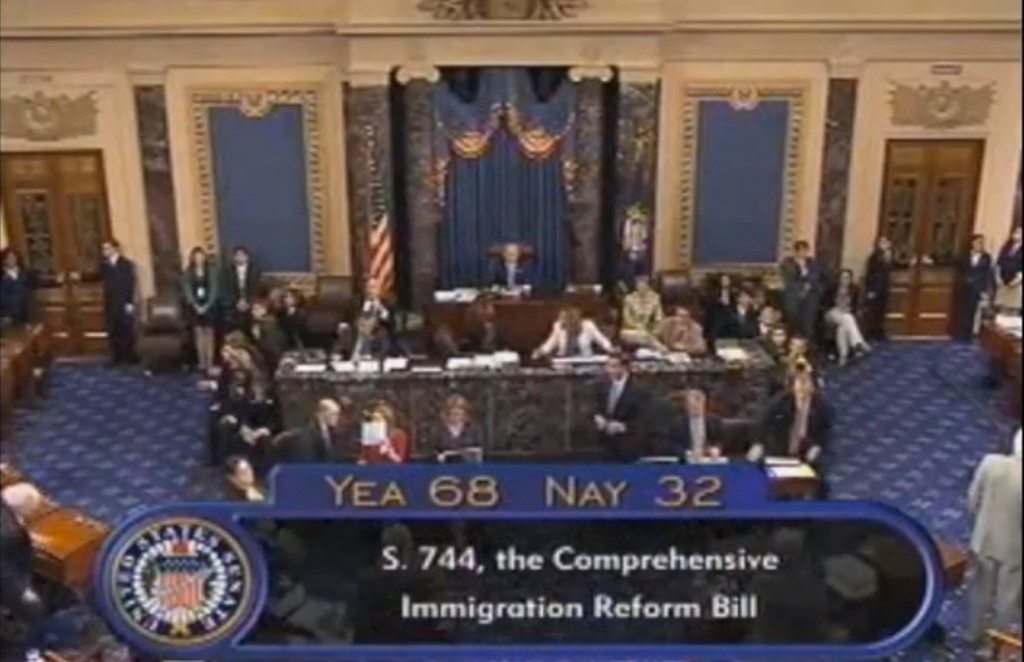 This is a roll call summary of this afternoon’s vote. The full list can been seen here.

The mainstream has called the vote “historic,” with several outlets quickly tweeting out their stories:

#BREAKINGNEWS: Senate passes immigration bill 68-32. Every Dem voted for it, along with 14 Republicans. http://t.co/AJ0r7bVU30

Pro-reform organizations also tweeted out their approval of the measure:

What we won with S. 744 immigration bill: an infographic #CIRfloor (keep in mind it’s not law yet!) pic.twitter.com/lZLXwV8CpQ

The bill doesn’t please everyone, but its passage is a victory for those who have been working on the issue for years and watched immigration reform fail six years ago. It addresses undocumented immigrants, legal immigration, border security, employer hiring and an entry-exit system so the government knows if foreign nationals leave the country when their visa expires. The path to citizenship is long — likely 13 years or more — and arduous, but advocates are thrilled that it would exist at all, given opposition from many Republicans and the failure of bills to carve out such a path in the past. Dreamers, young undocumented immigrants who came to the U.S. as children, would be able to earn green cards in five years, as would some agricultural workers.

The bill adds huge increases in border security, bolstered by an amendment from Corker and Hoeven that helped bring on board unsure Democrats and Republicans. The amendment would prevent green card status for undocumented immigrants until the government deploys 20,000 additional border agents, mandates E-Verify to prevent businesses from hiring unauthorized workers, completes a 700-mile border fence and adds to entry-exit systems to track whether foreign nationals overstay their visas.

Foley’s report also talked about the prospects of the bill passing in the House:

Speaker John Boehner (R-Ohio) reiterated on Thursday that he intends for the House to pursue its own immigration reform approach, rather than taking up the Senate bill.

“The House is not going to take up and vote on whatever the Senate passes,” Boehner told reporters at a press conference. “For any legislation, including a conference report, to pass the House, it’s going to have to be a bill that has the support of a majority of our members,” he added later, referring to Republicans.

Reaction to the bill’s passage was not positive for all pro-immigration groups, as this press statement from Pablo Alvarado, executive director of the National Day Laborer Organizing Network said just minutes after the Senate vote:

We are deeply disappointed with the unnecessary concessions made by Senate Democrats that have bent to the fears of xenophobes and weakened the reform that so many have struggled for. If undocumented day laborers can stand up to a Sheriff like Arpaio, the leaders in the beltway should be able to find at least a fraction of that same courage.

As the bill moves to the House of Representatives we will ready ourselves for an onslaught of racists that are determined to deny immigrants of our rights and convert the country into Arizona.

Though the prospects for the bill face multiple dimensions of uncertainty in the House, it is clear that some intend to make it more a tool of punishment than progress. That is why the President must take concrete action to advance a positive bill and relieve the suffering of immigrants. His deferred action program is proof that administrative action can both grant relief and move politics in the right direction. The idea that such incremental progress must be postponed for a legislative strategy should’ve been put to rest long ago.

The best step the President can take to help pass immigration reform is to instruct his Secretary of Homeland Security to end the Secure Communities deportation quota program and to enact a suspension of deportations as the debate in Congress continues.

During a speech on June 11, President Obama said the following about the bill: “This bill isn’t perfect. And going forward, nobody is going to get everything that they want — not Democrats, not Republicans, not me. But this is a bill that’s largely consistent with the principles that I … have laid out for common-sense reform. So if you’re serious about actually fixing the system, then this is the vehicle to do it.”

One response to “Senate Passes Imperfect Immigration Bill by a 68-32 Margin: Debate Moves to House of Representatives”