This afternoon, after Latino Rebels requested for a statement from GOYA Foods regarding the placement of a large product logo on the base of a new Roberto Clemente statue in the Bronx, the company issued the following statement to NBC Latino:

“The creation and donation of this statue was done with the best of intentions. This was not done as a marketing or sales campaign for Goya, but an opportunity to honor a man and a family that we have had a longstanding relationship with for over 50 years. Goya and Clemente had organized a number of baseball clinics, and Clemente was the manager of the Goya sponsored Santurce Baseball team in Puerto Rico. Cristobal Colon, who attended the unveiling last Thursday along with his sons Carlos and Angel, was Goya’s first salesman in Puerto Rico and a close friend to Roberto. They worked together on many community initiatives. Cristobal and his son drove Clemente to the airplane and were the last two people to see Clemente alive. We are aware that the Goya logo is prominent on the base of the statue, but we are very proud of the fact that we could donate this statue to not only the park but to the Hispanic community and the City of New York. It is disappointing to hear some people think that having Goya’s name on the statue would in some way lessen the impact. Goya has fostered a longstanding history, not only as a food company, but as an active part of the community beginning in New York more than 77 years ago.” 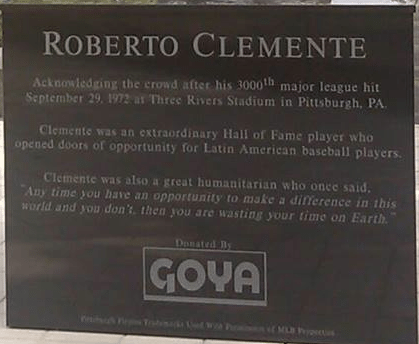 The statement was shared in response to a statement that Latino Rebels issued earlier to Bronx’s Channel 12 and NBC Latino today via our founder @julito77:

We have the utmost respect and admiration for Goya Foods, having been raised (literally) on many of its products. We also want to thank them for making this statue a reality. However, we do believe that a more understated presentation of their support would have been the right strategy in this case.

The current logo is the most prominent visual element of the statue’s base. As a result, the statue’s emotional impact is lessened considerably. This statue should not be seen as an advertisement for GOYA, especially a public statue in a public state park. Since the statue’s base already contains a basic factual error that needs to get fixed, we are hoping that GOYA does the right thing and be more subtle it how it supports this statue. Why not a simple sentence that reads, “Funding provided by GOYA,” instead of a branded logo?”

Like we have said in our initial post, this has nothing to do with GOYA’s history and what it has given back to the community. This is just about the placement of one rather prominent logo that has some in the community wondering why. Meanwhile, news of the factual error we initially reported that GOYA said it will now correct made the media rounds in Puerto Rico.