So Who Created the Racist Asian Names on KTVU Broadcast?

One of the most bizarre media stories ever got a bit more clearer after the National Transportation Safety Board said that a summer intern was the person who confirmed the racist Asian joke names that Oakland station KTVU was planning to broadcast in a report about the pilots on the Asiana flight that crashed in San Francisco on July 6. Initially, many thought that the NTSB intern was also the person who also created the joke names (including us), but now more information has come in. According to reports, the names originated from KTVU, and the NTSB intern was only confirming the names he had received from KTVU. 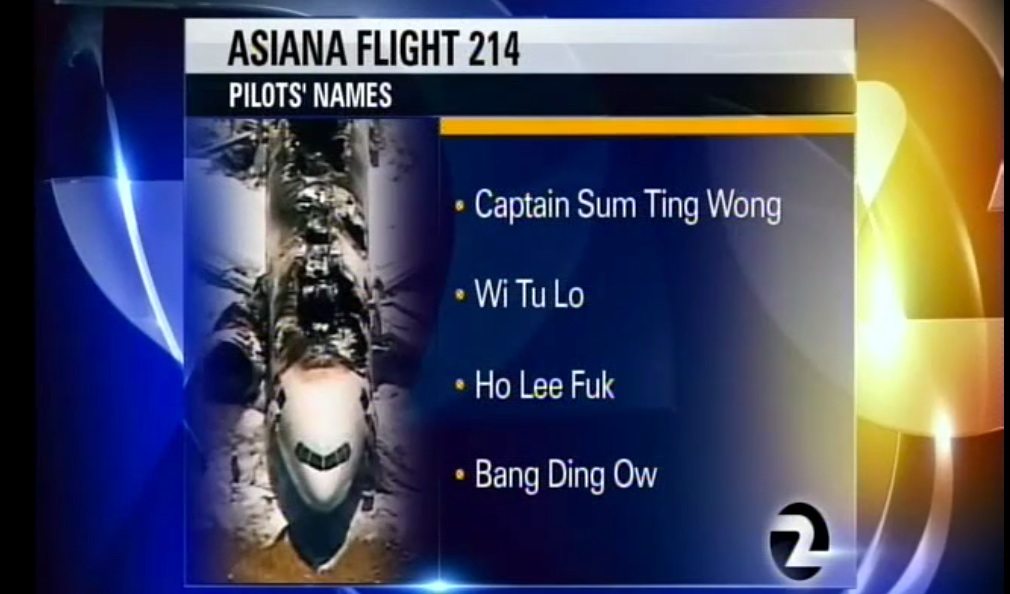 Here is what SF Gate reported:

The National Transportation Safety Board late Friday issued its own apology for “inaccurate and offensive names that were mistakenly confirmed” to KTVU Channel 2 as those of the pilots of Asiana flight 214, which crashed at San Francisco International Airport on Saturday.

The statement said that an NTSB summer intern, in response to the station’s inquiry, “acted outside the scope of his authority when he erroneously confirmed the names of the flight crew on the aircraft.”

However, in a subsequent phone interview with the SFGate’s Jeff Elder, NTSB spokeswoman Kelly Nantel made clear that the names “originated at the media outlet” and that the intern — unaware of the offensive names — was “acting in good faith and trying to be helpful” by confirming names he didn’t know.

“The NTSB does not release or confirm the names of crew members or people involved in transportation accidents to the media,” Nantel said.

So the logical question to ask is simple who created the names and how were they obtained? Also, who cerated the graphics with the names? One Twitter profile tweeted this out to us:

@DignityPeace @latinorebels The fake names in Internet for days. KTVU is not saying where they got them. Here's one: http://t.co/hpVtynYJs7

KTVU touted itself as the leading source for accurate coverage of last Saturday’s Asiana crash. That boast took a major hit Friday when the station fell victim to a hoax that made a mockery of the tragedy and offended many loyal viewers.

During its Friday noon newscast, the station reported that it had learned the names of the four pilots in the cockpit of the ill-fated flight, which crashed at San Francisco International Airport on July 6 and killed three passengers.

Those names were not only wrong, but so grossly offensive that it’s hard for us at the Asian American Journalists Association to fathom how those names made it on the broadcast. We choose not to repeat those names.

Some could argue that it wasn’t entirely KTVU’s fault. The station said it had confirmed the names with a phone call to the National Transportation Safety Board, which is investigating the crash.

Earlier in the afternoon, the NTSB said it had no role in confirming the names. But when pressed by KTVU and others, the agency looked deeper into the matter. By evening, the NTSB issued an apology.

“A summer intern acted outside the scope of his authority when he erroneously confirmed the names of the flight crew on the aircraft,” the agency said in a statement. “Appropriate actions will be taken to ensure that such a serious error is not repeated.”

Despite the NTSB’s apology, KTVU is hardly off the hook.

“It doesn’t make things right,” Lee Rosenthal, KTVU’s news director, conceded during a chat with MediaWatch Friday evening. Rosenthal acknowledged lapses in the reporting process. Questions that should have been asked weren’t, he said.

“We can assure you that none of this was premeditated nor was there any malicious intent in any way,” Rosenthal said.

With such a vaunted reputation among local news stations, we expected much more from KTVU. We fail to understand how those obviously phony names could escape detection before appearing on the broadcast and were spoken by the news anchor. We urge KTVU to conduct a thorough review to prevent similar lapses.

On its evening newscast, anchor Frank Somerville elaborated on the on-air blunder, explaining that the station made “several mistakes” after receiving the names from a source. The station declined to identify that source.

“First, we never read the names out loud, phonetically sounding them out,” he said. “Then, during our phone call to the NTSB where the person confirmed the spellings of the names, we never asked that person to give us their position with the agency.

“We heard this person verify the information without questioning who they were and then rushed the names on our noon newscast.”

AAJA is embarrassed for the anchor of the noon broadcast, who was as much a victim as KTVU’s viewers and KTVU’s hard-working staff, including the journalists who produced stellar work covering the crash.

But we’re mostly saddened that a tragedy that took the lives of three people and injured scores of other passengers could be taken as an opportunity for an apparent joke.

As of this posting, KTVU’s apology post contains no new information.