Why the Tampon Ban?

On Friday, my friend was protesting the hearings at the Texan Statehouse about the law to restrict abortion clinics—the same law that Wendy Davis famously filibustered for 13 hours against two weeks ago.  According to her Facebook status update, she and her friend had their tampons confiscated upon entry into the Statehouse.  My initial reaction was that I thought she was kidding.  Thirty minutes later, Rachel Maddow’s blog was being shared across the social media about how tampons were getting confiscated but not guns at the Texas Courthouse.  Apparently, the logic for the confiscation was that the tampons could get used as projectiles.  Of course, as a thinking person, I did not understand: Isn’t a gun by definition a projectile too?

Then I connected this policy to a situation years ago with an African American male friend of mine when we were trying to enter a posh bowling alley in downtown NYC.  He was not permitted in, because he was wearing Timberlands. Yet, I was allowed in with my black heels.  I asked the doorman about the Timberland policy, and he responded that the shoes would scratch up the floor.  As a thinking person, I did not understand: Won’t we be changing our shoes to those ugly red and blue shoes to bowl anyway? 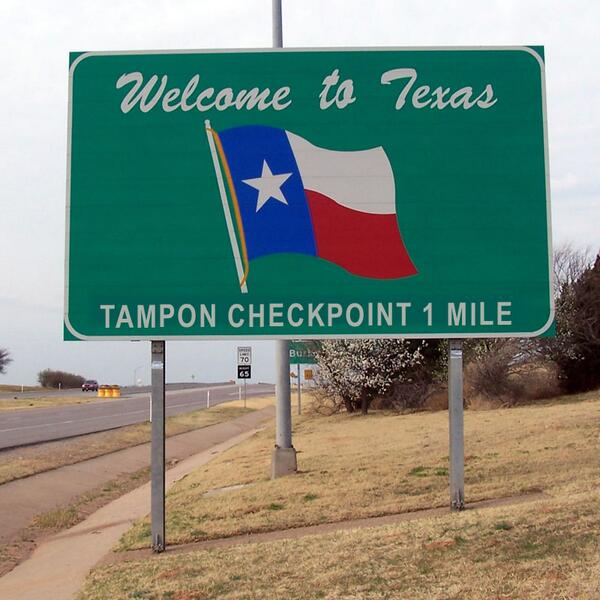 The tampon ban is not about protecting legislators from projectiles, just like how the Timberlands ban is not about protecting floors from bad shoes. The tampon-ban policy is about deterring women—specifically young women—from circulating in public spaces where decisions about their bodies will be made.   Timberlands are similarly associated with young men of color.  The anti-Timberland policy is about keeping men of color out due to the stereotypes that they “will cause problems” and “shake up the peace.”  Does that not sound familiar with the Anti-Tampon Policy?  The perception is that the women—specifically menstruating young women—“will cause problems” and “shake up the peace.”

Men generally don’t need or carry tampons, but younger women in their childbearing years do.  Similarly, men are more likely than women to carry concealed guns. According to Texas Department of Public Safety, 77% of concealed weapons permits in 2012 were issued to men. It is obvious:  the Legislature wanted to ensure that men could enter and participate in the legislative process on abortion, but women would be deterred from participating.

We continue to live in an era of Jim Crow with bans of our Timberlands.  But, it is also an era of Jacqueline Crow with bans of our feminine products. How many other groups have to suffer under these bans designed to keep us out?  When we are told that we can’t speak Spanish or wear certain colors or brands in certain spaces, we are essentially telling groups that their identities as part of a group do not matter and that they are not wanted to participate in a certain space as part of the collective identity.  Most importantly, when we limit groups like women and people of color from public spaces like the legislative process, we will perpetuate the sexist, racist, and classist laws and structures that will oppress the very people that should participate.