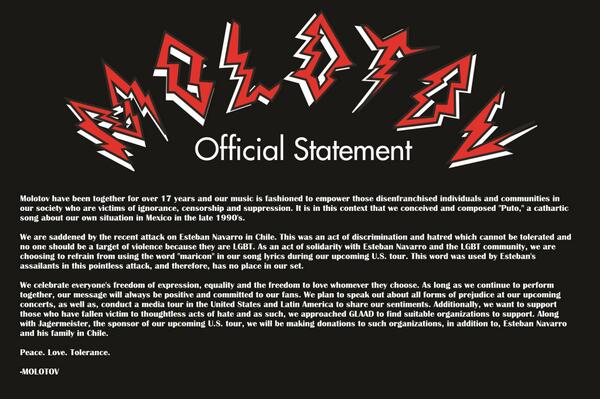 This statement was shared in response to the story of Esteban Navarro, a gay Chilean teen who was attacked last month. Here is what the HuffPost reported on July 9:

A gay Chilean teen will reportedly lose his leg after being attacked in an alleged hate crime.

San Diego Gay & Lesbian News cited a translated version of an original Spanish-language report in Terra Online, which claimed that 19-year-old Esteban Navarro was jumped by a group of six people on a soccer pitch June 23. The group reportedly attacked Navarro with a machete, knives and iron bars while shouting a series of anti-gay epithets.

Navarro was rushed to an emergency room immediately following the attack, where doctors determined that his foot would need to be amputated. Since then, Navarro’s doctors have determined it will be necessary to remove his legs, according to the report.

Although details of the case are scarce in English language media, Gay Star News cites a spokesperson for Navarro’s family, who said, “We hope the courts will punish those responsible with the full extent of the law. Esteban’s life has changed dramatically.”