According to local reports, 41 immigration rights activists were arrested today in Washington, DC. 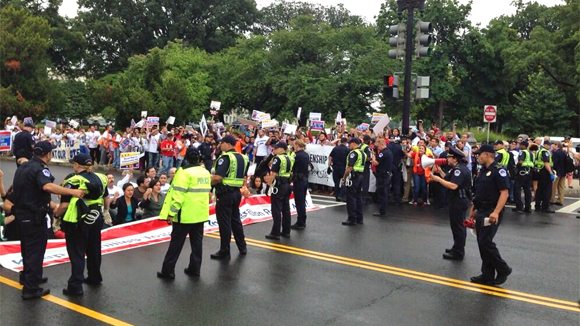 Forty-one pro-immigrant activists were arrested outside the Capitol Thursday after blocking traffic while pushing for passage of comprehensive immigration legislation.

After marching by the Capitol, the activists joined hands and sat down on Independence Avenue, a major street that runs through the congressional complex, displaying a banner demanding “Immigration Reform Now!”

Police officers handcuffed them and led them away. Capitol Police said in a statement that the activists were being processed on charges of blocking passage. 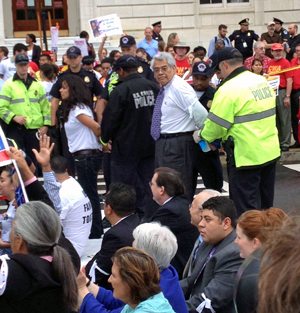 One of those arrested was SEIU Secretary-Treasurer Eliseo Medina, who issued the following statement earlier in the day:

“We took this action because we cannot allow the House to waste time. The urgency of the situation is too great. People are dying in the desert as they try to cross the border from Mexico, thousands of immigrants have been deported and every day families are being torn apart. We need to fix the system and we need to fix it now.

“[House Speaker John Boehner] needs to understand the urgency for reform. Until the House passes a bill that includes a pathway to citizenship, we will continue to be in the streets, at town hall meetings and on the phones, demanding justice for the 11 million aspiring Americans in our country.”

The HuffPost’s Elise Foley also tweeted pictures of the protest:

Foley included a picture of Illinois Rep. Luis Gutierrez, who showed up to support the protesters, but left before the arrests:

Several Democratic lawmakers joined the marchers but did not participate in the civil disobedience. Rep. Raul Grijalva, D-Ariz., promised: “What is happening today is going to be repeated around the country.”

Numerous chants and signs displayed by protesters sought to direct political pressure at the House GOP. “GOP, do you want our vote?” asked one banner. “Republicans, remember, we’re voting in November,” protesters chanted.

The conservative site Twitchy ran a rather detailed story about the arrests. That post showed several pictures taken from the action. The Twitchy report was surprisingly understated, although it said, “Just too bad this will likely not be the last time protesters try to shut down D.C. — or any city.” Looks like even Twitchy was taken aback by the protest.