Now the context from the San Antonio reporter who broke the story today: 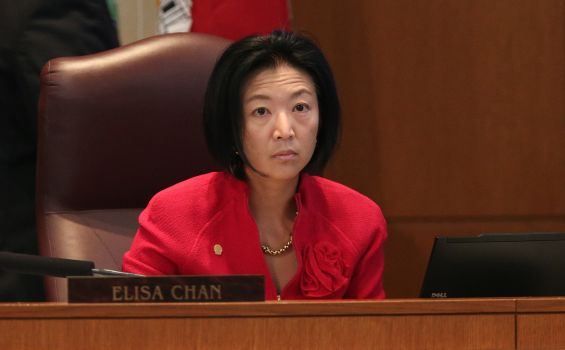 That exclamation escaped the lips of District 9 Councilwoman Elisa Chan on May 21 in her City Hall office, where she was meeting with members of her staff to discuss the city’s proposal to update its nondiscrimination ordinance, adding protections for sexual orientation and gender identity.

In the course of the conversation, Chan expressed her unvarnished views on homosexuality, which range from befuddled to intolerant.

She revealed that she believes being gay is a choice and that gay people should not be allowed to adopt children, and she voiced revulsion toward the LGBT community.

Unbeknown to the councilwoman, an aide, James Stevens, was secretly recording the meeting on his iPhone. (He’s now a former aide; Stevens, 28, quit this week.)

You can read the whole story here.

@elisa_chan All that education and yet so ignorant! Do you have a reponse to your district? http://t.co/T33yP4f44Y

Shout out to @Elisa_Chan for standing up for bigotry and against equal rights before the law. You’re over. Farewell. http://t.co/XJAdoS36tw — derak (@ghostframes) August 16, 2013

@Elisa_Chan You’re not too bright, are you?Heart seems kinda tiny too.

Wonkette said it best so far:

What is fascinating about this secret audio recording of her staff meeting though — taken by James Stevens, a now-former staffer, and broken by MySanAntonio — is listening to all these idiots try to figure out: What makes a gay? You can hear some younger staffers try valiantly to sexplain about “biology,” and “science,” and other staffers bein’ all hey what now howdy gays are turned gays by their mommas and their Scout Masters, and it is like getting a backstage pass into the Befuddlement of the Wingnut-American Mind.

One response to “#NoMames: The Secret Homophobic Recordings of a San Antonio City Councilor”