UPDATE, November 18, 2013: a counter-protest is now being scheduled.

Apparently drawing from a 2005-06 plan of Young Conservative organizations on campuses across the country, the UT Austin chapter of Young Conservatives of Texas (YCT) is hosting a game on campus this Wednesday called “Catch an Illegal Immigrant.” The game involves students walking around campus with the words “Illegal Immigrant” on their back. Students who capture the marked students and bring them back to the YCT table will be rewarded with a $25 gift card.

As was the case with the YCT bake sale on the west mall last month, such tactics are inflammatory and demeaning. And once again in trying to be provocative, the YCT is contributing to an environment of exclusion and disrespect among our students, faculty and staff by sending the message that certain students do not belong on our campus. Some UT Austin students are undocumented, and under Dream Act legislation signed into law in 2001, these students are entitled to attend state universities. They are part of a growing diverse population on campus and in the state of Texas—a population that plays increasingly larger roles in our intellectual, economic, political and cultural communities.

The university honor code entreats students to abide by the core values of the university, one of which is freedom, but two others of which are individual opportunity and responsibility. The university also values free speech and our campus continues to be an arena that inspires dialogue from diverse viewpoints. However, it is also meant to be a community where students exhibit respect for each other while holding those viewpoints.

If the members of YCT carry out their plan for “Catch an Illegal Immigrant,” they are willfully ignoring the honor code and contributing to the degradation of our campus culture. And once again, they will have resorted to exercising one of the university’s core values to the detriment of others. Such actions are counterproductive to true dialogue on our campus, and it is unrepresentative of the ideals toward which our community strives.

The event organizer also spoke to Buzzfeed this afternoon.

The proposed YCT event is completely out of line with the values we espouse at The University of Texas at Austin. Our students, faculty and the entire university work hard both to promote diversity and engage in a respectful exchange of ideas. The Wednesday event does not reflect that approach or commitment.

As Americans, we should always visualize our Statue of Liberty and remember that our country was built on the strength of immigration. Our nation continues to grapple with difficult questions surrounding immigration. I ask YCT to be part of that discussion but to find more productive and respectful ways to do so that do not demean their fellow students.

The university Staff Council has unanimously endorsed the statement.

Are you f-ing kidding us? For a second we thought that the following tweet from Texas Tribune editor Emily Ramshaw was a joke: 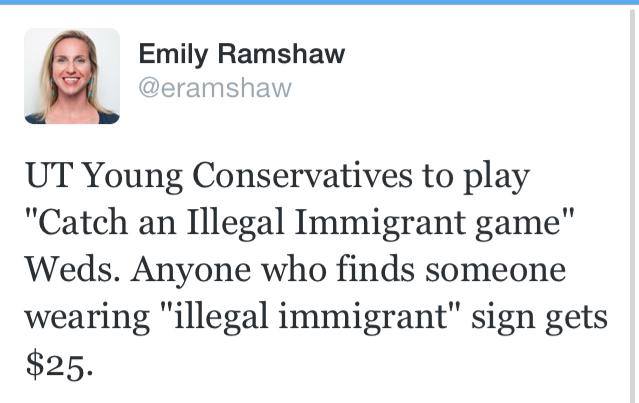 This is an actual event being promoted by UT’s Young Conservatives:

YCT will be having a “Catch an Illegal Immigrant” event this upcoming Wednesday. The details of the game goes as follows:

There will be several people walking around the UT campus with the label “illegal immigrant” on their clothing. Any UT student who catches one of these “illegal immigrants” and brings them back to our table will receive a $25 gift card.

The purpose of this event is to spark a campus-wide discussion about the issue of illegal immigration, and how it affects our everyday lives.