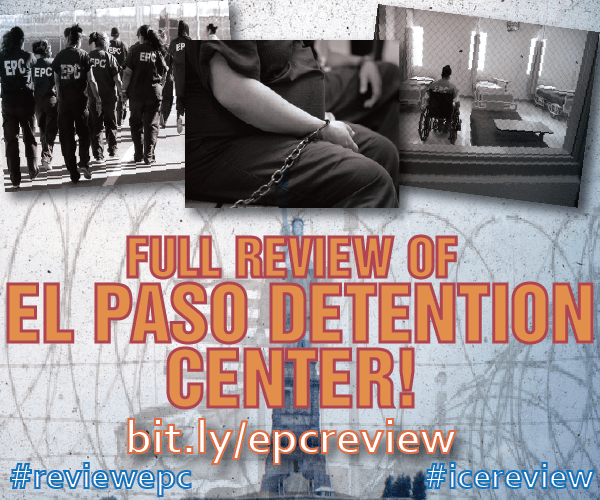 El Paso, Texas –Organizers working with the National Immigrant Youth Alliance (NIYA) have intentionally allowed for themselves to be detained by Immigration and Customs Enforcement agents, in order to gain access to the El Paso Processing Center. A NIYA organizer has been embedded within the El Paso center for nearly three weeks now; the organizer has helped uncover nearly 100 instances of ICE officials refusing to release parole eligible individuals.

The El Paso Detention Center houses nearly 800 immigrants, many of which are detained after surrendering themselves at the U.S. Port of Entry, seeking asylum. “The stories in here are crazy; there are some people in here who passed their [credible fear] interviews back in June or July, and they still haven’t been released.” An unidentified NIYA Organizer inside the El Paso Detention Center. “I’ve only been here for a couple of weeks; I think 2 out of the 3 people I talk to every day are in this category, they’ve passed credible fear but they aren’t being released.”

On Tuesday, December 10th, the NIYA will identify the name of the organizer embedded within the detention center, as well as delivering 12,000 petition signatures calling for a facility wide review.

According to the, Islas-Muñoz Law Firm: “ICE Assistant Secretary John Morton issued a memo in 2009 which took effect in January 2010 [directive no.: 11002.1], providing for the consideration of release on parole for individuals who were arriving aliens and who had passed a credible fear interview, the initial prima facie vetting of an applicant’s asylum claim. There are countless instances here in El Paso, including 6 between the 3 of us [immigration attorneys], of individuals who have passed a credible fear interview, have documentation to provide ICE officials as to their identity and ties in the US, but have been denied release on parole.” Attorneys from the firm report that one such client was recently deported.

With the help of the NIYA organizer inside, we’ve identified the following:

–          Over 100 cases where detainees are granted Credible Fear, provide sponsorship documents, and ICE officials still refuse to parole them;

–          Six cases of pregnant women detained in conditions detrimental to the health of their unborn babies, including one women who suffered a miscarriage, inside the center;

–          Instances of male and female detainees being refused proper medication, despite diagnosed conditions;

As a result of these clear abuses, NIYA has launched a petition (http://bit.ly/epcreview) asking that, Washington D.C. ICE officials, initiate a full review, on a case-by-case basis, of the entire facility. In July of 2012, NIYA organizers infiltrated the Broward Detention Center, there they uncovered nearly 300 abuses of a similar discretion memo. Calls for a review of the Florida facility were echoed by 26 members of Congress, who signed onto a letter asking for a similar investigation. In the aftermath of the Florida infiltration, nearly 160 immigrants were released; it is NIYA’s hope that, Washington D.C. will take a similar approach to our findings in El Paso.