An internal affairs report released today by the Durham, NC Police about the Jesus “Chuy” Huerta case states that the 17-year-old shoot himself to death on November 19 with a weapon while he was handcuffed in the back of a police patrol car, according to local outlets.

This is the latest 6pm broadcast out of Durham:

Local Durham news has revealed several details of the report. Here are some of the information Internal Affairs Captain Laura Clayton shared at a news conference: 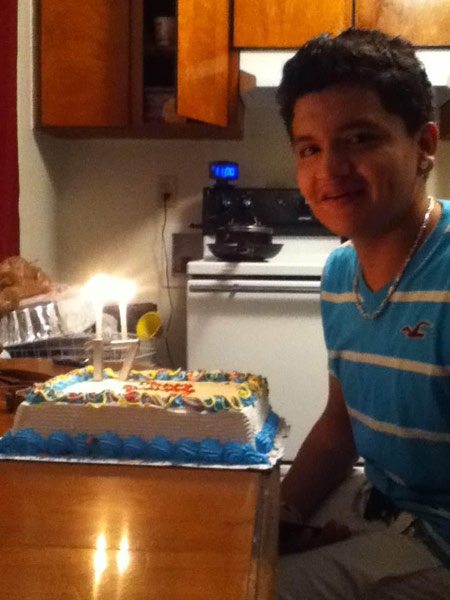 Then the following was reported:

Police decided to take Huerta into custody, and Officer Samuel Duncan handcuffed him behind his back. Both Duncan and another officer present said Duncan searched Huerta’s pockets and frisked him before placing him in the back of a police car. Duncan also said the car was checked to be empty at the beginning of his shift and Huerta was the first prisoner placed in the car on his shift. Huerta was wearing white baseball-style gloves on his hands. He was allowed to keep them on.

While Huerta was in the backseat of the car, he was seen to be moving his hands from behind his back to a position behind his knees. Huerta was temporarily taken out of the car and told to reposition his hands.

Officer Duncan next headed to Durham Police Headquarters to pick up the warrant for Huerta’s arrest. Clayton said it is a distance of about a mile and would have taken about three minutes. Clayton said an in-car camera system in Duncan’s car had stopped recording while the car was stopped and Duncan did not log back into the system when he began driving – which would have switched it on again.

During the drive, Duncan said he could hear metal scrabbling against the hard plastic of the seat and assumed Huerta was trying to possibly get rid of drugs he might be carrying. Duncan said he planned to search Huerta again when he arrived.

As Duncan’s car pulled into the parking lot around 2:30 a.m., he reported hearing a loud bang and he jumped out of the moving car, which then rolled into parked vehicles.

What happened next? The officers “found Huerta slumped over in the backseat.” Huerta was found dead in the back, gun shot wound to the head “and a black semi-automatic .45 caliber handgun was found lying on the seat beside him.” During the investigation of the scene, it was reported that residue from the gunshot was found on Huerta’s gloves. The gun was even traced to a Commerce, Georgia pawn shop. The ATF confirmed that.

He said he wants to know if Huerta’s friend – who was interviewed by police – reported that he was armed.

“This DPD ‘Update on Preliminary Findings’ is, to paraphrase Winston Churchill, a whitewash wrapped in a cover-up and basted in denial. The tiny truths in there are intertwined with half-truths and misdirection, the facts are not readily identifiable. The chief’s shell game with the facts continues,” said Charns.

Charns said he doubts Huerta had a gun on him.

“He was frisked and found to have no gun. The gun most likely was in the back seat when Chuy was placed there,” he charged.

And now the NAACP is getting involved.

This story is not going away.

As you can imagine, there is a heated debate in Durham. Here are just some public social media comments from today:

The only thing going to satisfy this family is for the arresting officer to be put in front of a firing squad. Oh, by the way, they want a million dollars for their son shooting himself in the head. The lawyer also wants his share of the million. I’m surprised Jesse, Sharpton, and William Holder have not chimed in on the case. Guess they only do black on white cases. At lease they have solved a home robbery case and got a thug off the street.

Punk gets arrested with hidden gun and blows his brains out in the back seat of a cop car. No news here. Case closed.

The only person that I feel bad for is the gentleman who had to mop up Chuy’s last thoughts from the back seat of the squad car. Imagine having that job…

I want to know how he supposedly shot himself in the face with his hands cuffed behind him? The cops haven’t even tried to explain that. I wonder why? One simple part of the explanation would be: where were his hands after he died? Still cuffed behind his back? If so, then I call BS. And the cop’s camera just happened to stop working right at the crucial moment? Yeah, right. If you believe that I got a bridge I want to sell you.