Remember that Houston middle school principal who got slammed for telling students that they could not speak Spanish in school? Looks like she lost her job. 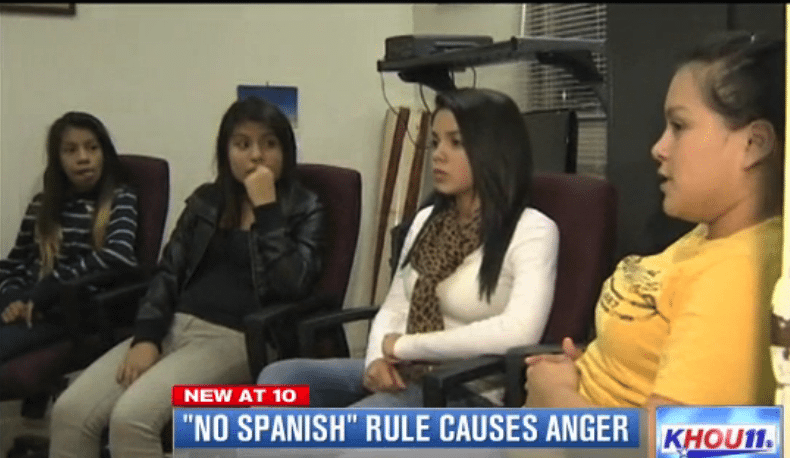 We first found out via Twitter last night from those who were following the story:

The Houston Chronicle wrote about it this morning:

HEMPSTEAD – Amid calls for a federal investigation of possible hate crimes, the Hempstead ISD board voted Monday night not to renew the contract of a principal who instructed students not to speak Spanish at school.

Hempstead Middle School Principal Amy Lacey was placed on paid administrative leave in December after reportedly announcing, via intercom, that students were not to speak Spanish on the school’s campus. More than half of Hempstead’s students are Hispanic, and Waller County, a rural area about 50 miles northwest of Houston, has one of the state’s fastest-growing Hispanic populations.

Civil rights advocates say Lacey’s suspension may have set off a campaign to intimidate Hispanics, including the district’s superintendent, Delma Flores-Smith.

Flores-Smith reports that she’s seen strangers watching her house and taking photos. She says vandals have trashed her yard and someone has rifled through her garbage. She is worried about her safety.

Last month, school employees found that vandals had damaged the brakes of three Hempstead ISD buses, and had left behind the bedraggled remains of a dead cat. A bus with visibly severed brake lines didn’t leave the bus barn that morning. But two other buses, whose air-brake lines had been subtly nicked, carried children to school before the damage was discovered.

When reached for comment today, “El Librotraficante” Tony Diaz, also a member of Latino Rebels, shared his thoughts about the news. Diaz has been following the Lacey’s story since it broke last December:

In a multicultural, multimedia era, small town oppression will no longer go unchecked. What is also powerful is that a cross-cultural coalition formed to combat the banning of Spanish. That is just another sign that Texas gets it.

It was great to see the Super Groups like LULAC and MALDEF take the lead, with support from Librotraficante, Nuestra Palabra, and AFSCME. But as always, this began with a student standing up for what she thought was wrong, and a parent getting behind her and speaking out. Of course, I can’t help but think that if the principal had taken Mexican American Studies courses she would know just how offensive and humiliating to our community her actions were. That’s why our next step is to ensure that Mexican American Studies is available to all schools in Texas.

As for the allegations of an intimidation campaign in Hempstead, Diaz said the following:

Texas needs to move forward, not behind. The banning of Spanish reminds us of what our grandparents once had to suffer in Texas schools. Also, some of the intimidation tactics that were employed to keep people from standing up against this banning of our culture are reminiscent of a Texas of long ago that must not return. Retro-clothes are cool. Retro-racism is not.

Diaz and his radio colleagues will be discussing the Hempstead decision tonight at 6pm Houston time on KPFT.