When we get a Change.org petition from one person, we give it a glance. When we get the same petition from 15 people in the same day, we tend to write a story about it. Such is the case of a petition from Puerto Rico slamming a local Dentyne Ice advertising campaign for being sexist. Here is the image of one of the ads, found on a public transportation train in the San Juan metro area: 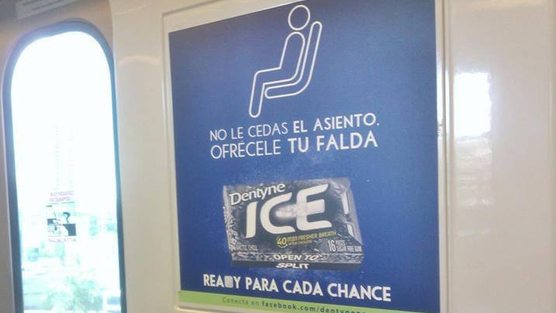 The sign shows a figure (male?) sitting on a train seat, which the following text below: “Don’t give up your seat. Offer your lap.” (“Falda,” which can also means “skirt” in Spanish, also means “lap” in Puerto Rico). Then it says, “Ready for each opportunity (chance).” Slogans from other parts of the campaign included, “If that body were a mountain, I would be a mountain climber,” and “I want to be the sun to warm you up [get you hot] all day.” Apparently, many did not get the joke, as the petition (“This campaign encourages male behaviors that threaten the integrity of women. In addition, it projects men as irrational beings, unable to control their impulses and treat women with respect. The campaign perpetuates sexist, macho and violent notions that cause many of our society’s ills of our society”) and social media (#NoMasticoElMachismo/#IDontChewMachismo) spread the word about the ad.

Calls for apologies were made, and it looks like the pressure worked. Earlier today, just hours after word of the ad spread, the distribution company responsible for the ads offered the standard “our bad” statement. Dentyne also added a statement, part of which read that is was never the intention to “promote inappropriate behaviors” in its advertising. The ads were removed as well.

However, DentynePR’s Facebook page is still getting hit with comments against the product.