In honor of Women’s History Month, here is the second part of our series.

Worryingly, children learn violent behavior from witnessing violence. Men, too, can be victims of domestic violence and account for 15 percent of all cases.

In immigrant communities the statistics are harder to come by, but the National Latino Alliance for the Elimination of Domestic Violence says that domestic violence “is a widespread and destructive problem in Latino communities.” Language barriers, fear of deportation and cultural differences make it hard for immigrant victims of violence to come forward and receive the support they need. 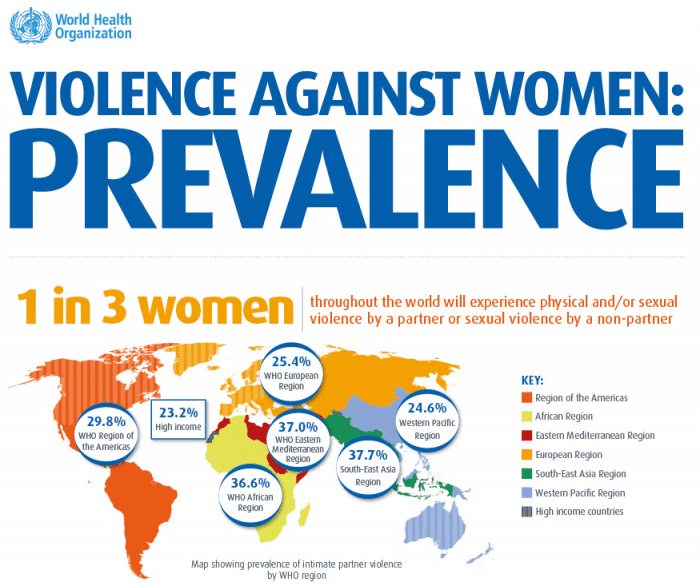 Latinas and immigrant community members are also at risk of sexual violence.  They also often face sexual harassment at work. Human trafficking is another major problem that afflicts Latinas in the United States.

Below, we highlight five Latina leaders who have worked tirelessly to improve the situation for the millions of women and men who are the victims of violence each year.

Maria Jose Fletcher is trained as a lawyer and is actively involved in the fight to end human trafficking and violence against women. She spent two years on the National Advisory Committee on Violence Against Women and she is the co-director and founder of the not-for-profit VIDA Legal Assistance. VIDA exclusively provides support and legal representation to immigrant survivors of violent crime, making it the only legal service of its kind in Florida.

Undocumented immigrants often exist in precarious circumstances, meaning they are less likely to want to alert the authorities if they are in trouble. One VIDA client explains, “My biggest fear in reporting the acts of domestic violence which I was subjected to by my husband, was being deported and leaving my children alone.” However, part of VIDA’s work is to educate immigrants on the laws that exist to protect victims of domestic abuse, as they do not necessarily face deportation for pressing charges in such cases.

Laura Zárate is the daughter of parents from the Mexico border region. She has three decades of advocacy and training experience, and in 2001 she co-founded Arte Sana (Art Heals), an organization that encourages healing through art for survivors of sexual and gender-based violence. Arte Sana has been recognized by the Centers for Disease Control and Prevention as a model program for survivors of sexual assault.

Founded in Austin, Texas, Arte Sana was the first national Latina-led organization to address sexual violence. Zárate has led the development of bilingual training programs on sexual assault, as well as championing internet-based collaborations amongst victim advocates. Arte Sana has also provided capacity-building training to organizations across the border in Ciudad Juárez, known worldwide for exceedingly high rates of violent crime against women.

Rosie Hidalgo has dedicated her twenty-year career to the fight against domestic violence, both in her former capacity as an attorney in New York City and Northern Virginia and in her current role as the Director of Public Policy for Casa de Esperanza (based in Saint Paul, Minnesota) and the National Latin@ Network, a network of organizations committed to improving the health and wellbeing of Latin@ communities.

Hidalgo also played an integral role in ensuring that the Violence Against Women Act was reauthorized in 2013. Rosie spent four years working in the Dominican Republic on domestic violence prevention, and she had also worked as a consultant for the World Bank on social protection initiatives.

In 2013, Hidalgo won an award recognizing her work on domestic abuse and immigration reform. Hidalgo said in her acceptance speech, “… comprehensive immigration reform is the critical next step to reduce the vulnerabilities to abuse and exploitation of millions of undocumented immigrants in the United States and to strengthen families and communities.”

Olga Trujillo is an attorney, author and consultant, renowned for her work to end child abuse, domestic violence and human trafficking. Trujillo began her career in the early nineties at the US Department of Justice, where she became the youngest women and only Latina to ever serve as General Counsel to the Office of Justice Programs.

As a survivor of abuse in her own family, Trujillo has an insider perspective on issues to do with violence against women. “Part of the coping that I developed was to basically dissociate, to leave my body and watch it as if it was happening to someone else,” Trujillo explains in ‘A Survivor’s Story,’ a courageous documentary that details the impact of emotional and sexual violence on her life.

Her current work includes providing training to mental health, medical and criminal justice professionals, as well as speaking at events across the country. In 2012, Trujillo published an autobiographical book called ‘The Sum of My Parts: a Survivor’s Story of Dissociative Identity Disorder.’

Susan Reyna was born in the US to a migrant farmworker family in 1955. She witnessed ongoing domestic abuse against her mother and at age five went to live with her grandparents in Texas. Far from a safe haven, she then experienced sexual abuse at the hands of her grandfather.

At age 19, when she already had two young children and a failed marriage behind her, Reyna got her first big break and was offered an office job with a migrant rights organization. She worked her way through the ranks of several organizations and today Reyna is the executive director of M.U.J.E.R. (Mujeres Unidas en Justicia, Educación y Reforma), an organization that primarily provides services to farm worker communities in Miami-Dade County, Florida. M.U.J.E.R. assists adult victims of sexual assault and domestic violence. You can read more about Reyna’s amazing success against the odds here.

Jen Wilton currently lives in Oaxaca, Mexico and reports on social and political issues related to Mexico and Latin America more widely. Jen tweets as @guerillagrrl and blogs at revolutioniseternal.wordpress.com