Looks like Cinco de Mayo 2014 is moving away from 2013 stereotypical ignorance to a new wave in patriotic nativism. Yesterday, we shared a story from California, where a school district had to warn parents that the safety of students could be in jeopardy on May 5. That decision by Morgan Hill Unified School District (MHUSD) stemmed from a a court ruling banning students from wearing US flag t-shirts on Cinco de Mayo (more on the actual decision below). Now an online radio show called “The Crow and Moore Show” is taking the MHUSD decision to another level—by hosting a “Pre-Anti Cinco De Mayo Bash.” 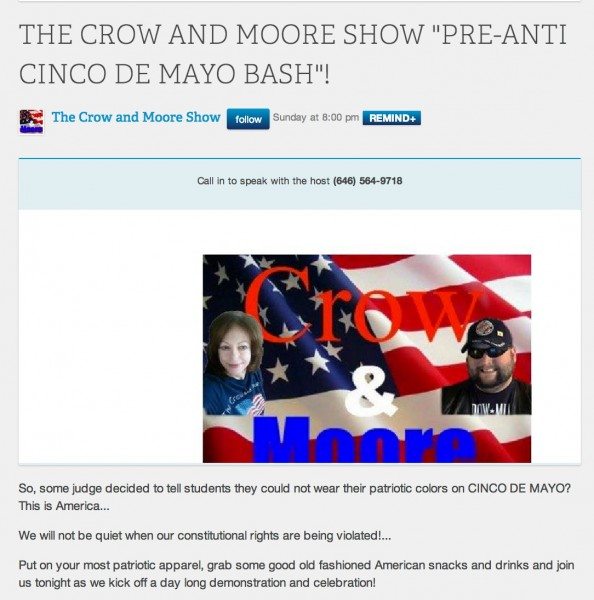 Here are just some samples of what is being shared.

From a guest who will be attending the party: “I will be burning a small Mexico flag on May 5th, This is America, Not Mexico!!! IT WILL BE POSTED ON FACEBOOK…”

That post has since been removed, but if you visit the event page (which includes posts about César Chávez against undocumented immigrants), news articles about concealed guns and that damn socialist Muslim president from Kenya,  you still see such enlightened comments such as:

“It is not about race you idiots, it is about the LAWS!! DEPORT THEM ALL, INCLUDING THEIR DAM ANCHOR BABIES!! CRIMINALS!!!!!”

“DEPORT THEM ALL, INCLUDING THEIR DAM ANCHOR BABIES!! CRIMINALS!!!!!”

Nothing like some good old-fashioned anti-immigrant speak, because you know, it’s Cinco de Mayo. And besides celebrating ‘Murica, don’t forget the other stories the radio duo will be covering, such as this one about the rise in concealed weapons permits. That story got the following comment:

“sO, DOES ANYONE KNOW HOW DIFFICULT IT IS NOW TO GET ONE AND HOW MUCH IT COST??”

By the way, before everyone gets all huffy and puffy about the initial court decision that is getting all these so-called patriots riled up, let’s pause for a moment about the actual case. As one First Amendment trial and appellate lawyer wrote in the following piece, “It Wasn’t the American Flag Versus the Mexican Flag: Dariano v. Morgan Hill Unified School District:”

According to the Court, school officials permitted two other students “to return to class, because the Principal considered their shirts, whose imagery was less ‘prominent,’ to be ‘less likely [to get them] singled out, targeted for any possible recrimination,’ and ‘significant[ly] differen[t] in [terms of] what [he] saw as being potential for targeting.'” Those shirts bore the logo of a popular martial arts company with flag iconography.

So the American flag wasn’t banned at all. Not all flag displays were provocative so they were not embargoed. A flag ban was not what the case was about.

What the case was about was whether one school official broke the law in his attempts at preventing violence. The Court emphasized its job was not to second-guess the school sanctioning a Cinco de Mayo celebration or the precautions the school put in place to avoid violence. That’s no surprise, really; it’s not what courts do. Courts take the cases that come to them and decide on the facts before them as applied to the law as it exists. At least, they are supposed to do nothing more than that.

Yes, the case stirs up all of our concerns about violence in schools, how the pride of different cultures can be accommodated, immigration, threats posed by gangs, the inadequacy of school resources and principals’ lack of supervisory creativity and many other things. But this case didn’t ban the American flag from the school or prefer a foreign nation’s flag over ours. Let’s be honest.

But what does protecting students matter to the so-called patriots? Because Cinco de Mayo no longer means bad guacamole and Corona drink specials. It’s about hardcore prejudice against Mexican-Americans, known to the ignorants as the “illegals.” Simple as that. We applaud those Morgan Hill parents who are trying to keep their kids safe. But even with that, the haters are still there. As one person associated with a rally to celebrate unity in the town posted: