In what has become a contentious issue for the San Jose suburb of Morgan Hill, CA, emails sent to Latino Rebels tonight about upcoming Pro-US Flag Cinco de Mayo protests in front of Live Oak High School, allege that some pro-protest Tea Party members were threatening students at a local town meeting, even causing one student to cry. 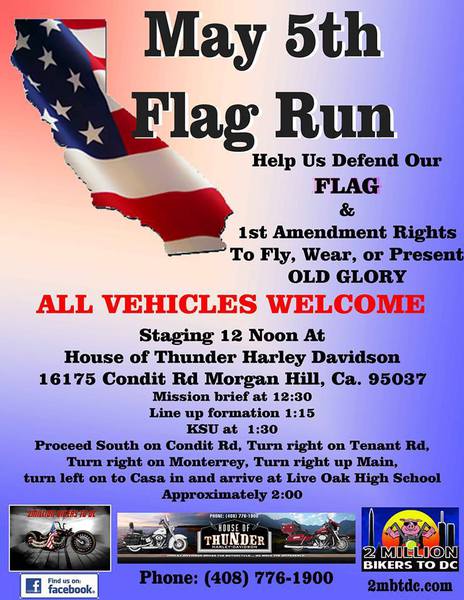 Attorney and high school parent Juan Lopez, who is organizing a “Unity, Respect and Peace Rally” counter-protest against two separate Pro-USA demonstrations by the Gilroy Morgan Hill Patriots (GMHP) and PatriotAction.net, shared the following email about the meeting:

We attended a town meeting yesterday where the Tea Party people were present. Also present were many Live Oak students, past and present. There was one clear message at the meeting, the students did not want any protest in front of their school. The students pleaded with the Tea Party protesters to not be at their school on 5 de Mayo. One young student cried and said they were taking their AP exams and were scared. It was a truly heartfelt request. The Tea Party protesters rebuttal was, what if I told you not to go to school tomorrow and you don’t always get what you want!! It was truly the ugliest reply I expected. After seeing student after student say to the Patriots not to be in front of their school and how much stress their presence was causing, Wethepeople decided to move our rally. We were partly causing the injury we so wanted the kids to avoid. Our purpose is and always was shielding the kids from physical and psychological injury. We will be at the Morgan Hill sports complex after at 5 to “empower, educate and inspire” (Cesar Chavez) we want to make sure the students and their parents can join in the rally.

The two different protests organized by GMHP and PatriotAction.net were formed in response to a recent court ruling that would essentially ban students from wearing US flag t-shirts on Cinco de Mayo because of previous violent incidents at Live Oak. (A full analysis of that case can be found at The Huffington Post.) Last week, Morgan Hill Unified School District (MHUSD) reiterated that its “primary concern is to provide a safe environment for our students and employees.”

UPDATE ON 5 DE MAYO (by Juan Lopez)
I spoke to police Captain [Shane] Palsgrove just now. We are going to be able to use the MH sports complex. The city is paying for it. Since our goal is to educate our kids, I am suggesting the rally begin at 5 pm and go to 7pm, this makes it possible for students and parents to attend. The time also assures they do not have to cross paths with any protester.

I want to hear from anyone who would like to address the crowd in a positive way, it can be through music, spoken word, dance, drums, etc… I have been assured by both the superintendent and the police chief that we are getting a large venue paid for and insured by the school district and police. I will be working very hard in the next few days to put together a rally that will be educational and help our community become an important part of Morgan Hill and Gilroy. I want to reinstate the Cinco de Mayo celebration at Live Oak, in a big way not as a side note. I will be asking that all the students at Live Oak learn about cultural respect through guest lectures. I want kids to understand the true meaning of the day, I want all our kids to be proud of their heritage and if they speak a different language to speak it proudly with out being ashamed. I want our children to understand that they are American and are part of the fiber that makes our country great. Let’s move forward together, I’ve pledged to not stop fighting for unity, respect and peace before and I will keep repeating myself so that we can remain united. Please get a hold of me with ideas for the rally. I want to have it at a time when our children can be present and learn about who they are, the support they have and that we will fight for them.

By the way, REAL U.S. patriots should know better: the REAL Cinco de Mayo actually HELPED the United States, even though the current state of the holiday has shied away from its historical roots, and is now mostly commercialized.