Sitting at my desk in Brooklyn, I read with sadness and anger the news coming out of Murrieta, California. I watch the raw video—the contorted grimaces of hate, the chants of “USA, USA,” the misspelt racism aimed at a busload of undocumented immigrants from Central America, mainly women and children. My thoughts drift back 26 years ago, when I first arrived in El Salvador. I was taking up a position as the Salvador Bureau Chief of United Press International, at the tail end of a vicious civil war. 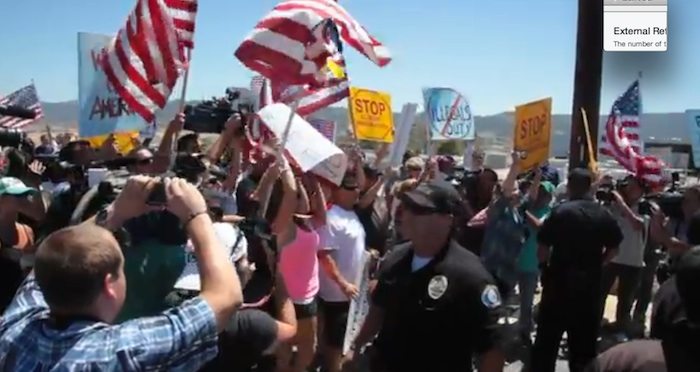 Walking through the arrival area of the airport, the first thing I saw were posters everywhere of children in crutches, children that had lost limbs to landmines supplied by the United States to the Salvadoran government. Welcome to El Salvador. I was a naive young journalist stepping into hell.

The scorching heat that hit me like a closed fist when I walked outside made everything stand out in high definition, a prelude to how vivid the images of this war would remain tattooed to the back of my skull. El Salvador was a strange place during that time – with a stench of pure evil covering everything like the fine mist of dust that was ever present. A cold paranoid fear serenaded by the slicing sound of helicopter blades.

El Salvador is now the United States forgotten war. The Americans came to this small Central American nation to correct the mistakes of Vietnam and hold the “rojos” at bay. They helped the Salvadoran military wage a bloody low intensity war against the guerrillas of the Farabundo Marti National Liberation Army (FMLN). The real victims in this were and still are the Salvadoran people.  More than 40,000 Salvadorans would die or disappear in this nasty Cold War fiasco.

A Vietnam War veteran I encountered deep in the countryside one day, out of the blue, a Coppola vision in the midst of horror, put it best. Dressed all in black, classic Ray Bans shading his eyes, unshaven, cigarette dangling from his mouth. He was sitting in the middle of a dirt road, a case of beer by his side. Walkie takie in hand, he was directing the chopper traffic that was ferrying wounded Salvadoran soldiers, caught in the combat of the day. When I asked what he thought of the war, he smiled and in a voice best suited to Lieutenant Colonel Bill Kilgore, said: “Ah, best little war in town.”

The legacy of that “little war” is sitting on buses in Murrieta. The violent street gangs that now plague Central America, especially El Salvador, were conceived during this dark period. Modern day death squads that now visit terror on their own people, trained in the streets of Los Angeles.

There is one instance that, for me, is a snapshot of what happened there, the farce that mirrored the true horror of this cruel war funded by Washington. An exhumation.

Gathered in the back of a church, in a dusty, hot town in El Salvador, where the Devil screamed three times and no one heard him. We, the small group that was the international press, had been called to cover yet another God awful story.

A representative from the Salvadoran human rights group Tutela Legal, founded by the Archdiocese of El Salvador, had arrived at my apartment at 8 a.m. and knocked loudly on the door. Bleary-eyed and hung over after a night of dominos, tequila and various chemicals, I opened it and stood there as she told me that all the foreign press was invited to an exhumation. Most of the foreign media had been at my house all night – we were not many – and we were really in no condition to witness anything.

We piled into taxis and began the long journey to the town, which was on the outskirts of the capital. The story was this—10 people had been executed in an attack. The FMLN claimed that the military had done it ‚that they had rounded them all up, tied them together, and opened fire and lobbed hand grenades at them— until they all died. The military claimed that the rebels had done it—in much the same way. The dead had been interred for more than one week. Tutela Legal had secured permission to exhume the bodies to try and ascertain what had really happened.

This is where the Fellini part starts. The exhumation was being done by two of the town drunks – bottles in hand as they dug the bodies out. The smell was overpowering. It was a sickly, sweet smell that attacked the nostrils and permeated your clothes. The drunks tried to place the bodies in an old wheelbarrow – but because they were so inebriated they kept on tipping the barrow and the bodies would flop out. It was worse than the Keystone Cops. They kept on slipping on the wet ground and falling all over the cadavers. The latter were wrapped up in bed covers of bright colors. As they fell to the ground, the covers would open and reveal grotesque death masks – many missing limbs and part of their faces.

As the bodies were placed one next to another —in a single file— the “forensic experts” where called in. These “experts” came dressed in semi-medical green garb, armed with scissors and kitchen knives in order to butcher the delicate operation that would determine how these poor people died. As they began their work, I could hear a veteran journalist vomiting in the back of the church.

This process took hours under the sweltering Salvadoran sun. The townspeople that were there refused to say what had happened. If they blamed the military, the soldiers would extract revenge. If they blamed the rebels, they could expect the same kind of treatment. They were trapped between the two—the real victims of the conflict.

Among them was a woman who is stamped in my memory. To this day she represents in my eyes the strength and dignity of the Salvadoran people. She looked quite old, with a lined, tight face. A thin kerchief covering her hair. She sat at in the same spot for hours – smoking a thin cigar, never taking her eyes off the grave site. Not batting an eyelid, no expression on her face. I went to her and asked why she had not moved since the exhumation began. Slowly, she turned her head and with the saddest expression I have ever seen, said to me,  “My husband and my two sons are in there. I am not leaving until they are out and I can bury them as God would want me to.”

This is the legacy sitting on those buses in Murrieta. We who witnessed this terrible war need to go back and tell the world what happened. Let the bones finally have their say. The reasons why we need to let those on those buses in.

12 responses to “El Salvador and Murrieta”