Did the City of Murrieta Hire a Professional Crisis Management Group After July 1 Protests?

Just a week after disturbing images of neo-nativist protesters went viral, social media is leaving clues that the City of Murrieta is actively trying to change its image through a crisis management group.

HERE I AM AT “BORDER CRISIS CENTRAL” IN MURRIETA, CALIFORNIA!!

I’ve been off Facebook for a week WORKING in Murrieta to help RESOLVE the dumping of children and adults from Central America in this bedroom community of 100,000.

My Crisis Management company was hired to break through the ugliness, get national and international media to report the story correctly, and be part of the effort to keep the peace between UGLY and HATEFUL rhetoric and warring factions.

What the media hasn’t told you is that the “processing center” for these kids and families is really a 200-prisoner JAIL where they put 30 to 32 people in EACH PRISON CELL that has ONLY ONE TOILET!!!

For the City of Murrieta, this is NOT ABOUT AMNESTY OR DEPORTATION or Left versus right politics. It’s about the humanity of.these folks on the bus.

See the photos here for the chaos, The fellow with the baseball cap is the well-known Mexican singer Lupillo Rivera, whose sister, Jenny River and her band were killed in a plane crash. Got to spend some quality time with him to talk about creating SOME kind of dialogue to end this kind of ugly confrontation.

This is a man-made HUMANITARIAN CRISIS of international proportions that WE HAVE NEVER SEEN IN AMERICA. Working with Murrieta Mayor Alan Long, one of the greatest guys you’ll ever meet, we’ve generated coverage from every corner of the U.S. and around the world. The BBC, France, the Irish Times, Spain’s “El Pais” news, Al Jazeera, I’ve worked with them all.

This is a world-wide story and I’m proud to say that our efforts have caused the Border Patrol to reconsider its decision to dump these folks in the local detention center. Today, they by-passed Murrieta and took the next busload of immigrants to Imperial County!!

Just wanted to update you. 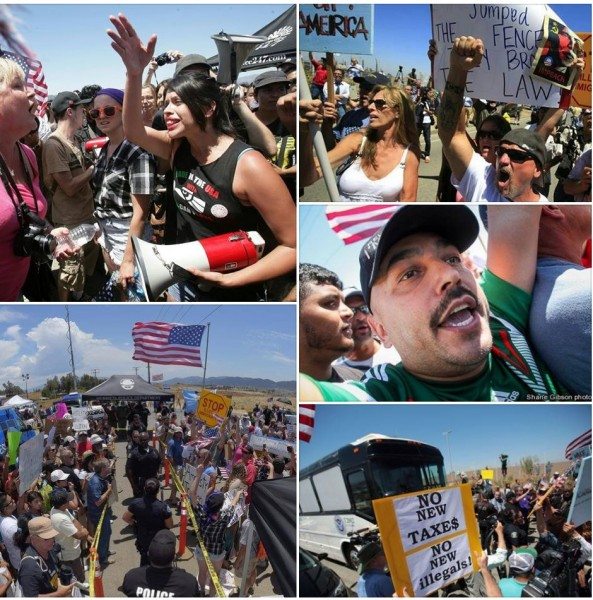 MURRIETA: Mayor’s letter to President Barack Obama over immigration by The Press-Enterprise / PE.com

This week, Murrieta’s Mayor Pro Tem Harry Ramos emailed Latino Rebels out of the blue with his rather bizarre and contradictory thoughts about the crisis, and today Ramos told the following to NBC News:

Murietta is not racist. Everyone in Murietta knows I’m brown; they knew I was a Latino and they embraced my family.

The whole thing was we don’t release illegal immigrants who had not been properly and medically screened in background checks; that was a major concern,” he said. “While my heart breaks for the kids, we are a nation of laws.

All this new messaging is a far departure from what Mayor Long said on June 30, the day before the first protests, which contained some incredibly hateful videos. None of the images and videos from that protest suggested that the protesters were concerned about  “a 200-prisoner JAIL” for the immigrant families being processed.

If that were the case, don’t you think we would have seen less of these images… 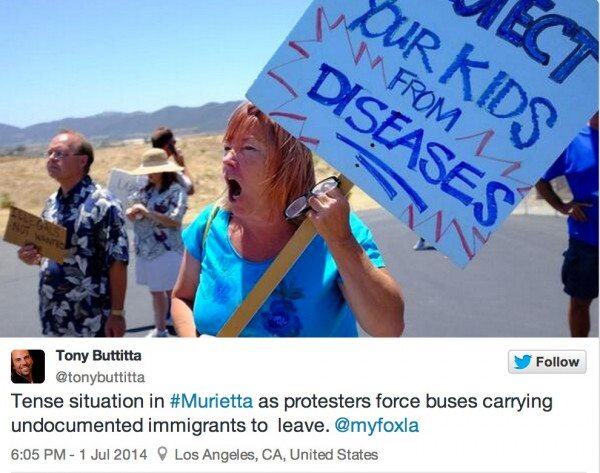 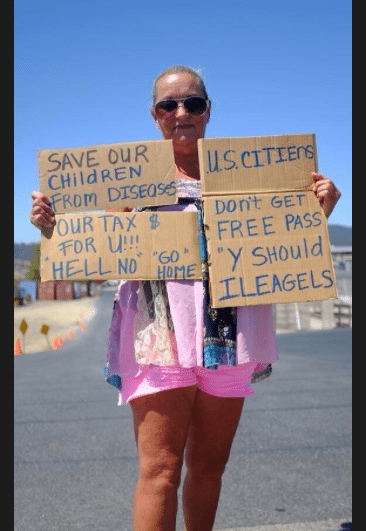 …and more images that would have criticized the conditions of the “jail?”

If the July 1 protesters were so concerned about what Hermosillo posted on his Facebook page, where are the “SAVE CHILDREN FROM JAIL” signs? Where are those  tweets showing concern? All these new talking points are coming AFTER the July 1 protest. Also, has Mayor Long actively condemned the protesters’ actions? Ramos told us that people have a right to protest and he told NBC News basically the same thing.

And finally, what about these very awkward FAQs that are still on the city’s site?

How does Hermosillo spin that one?