#JusticeForEricGarner: “Today We Have to Be Scared of Cops and Robbers”

HARLEM—Hundreds gathered Saturday morning at the National Action Network in Harlem to demand a just investigation in the case of 43-year-old Eric Garner, who was allegedly choked and killed by police in Staten Island on July 17.

The room was packed as the audience watched Garner’s wife, Esaw Garner, collapse in sobs next to Reverend Al Sharpton during his speech. 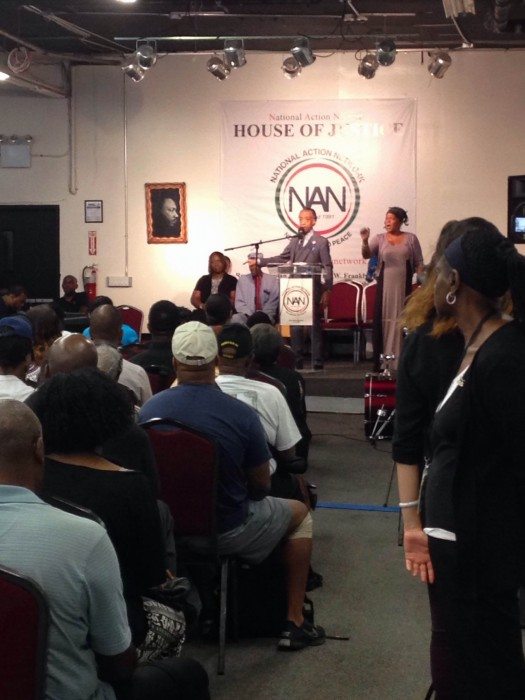 “Today we have to be scared of cops and robbers,” Sharpton said. He touched on media corruption, gun control and police brutality saying, “There is an unholy alliance between media, law enforcement and prosecutors. That is what we are fighting.” 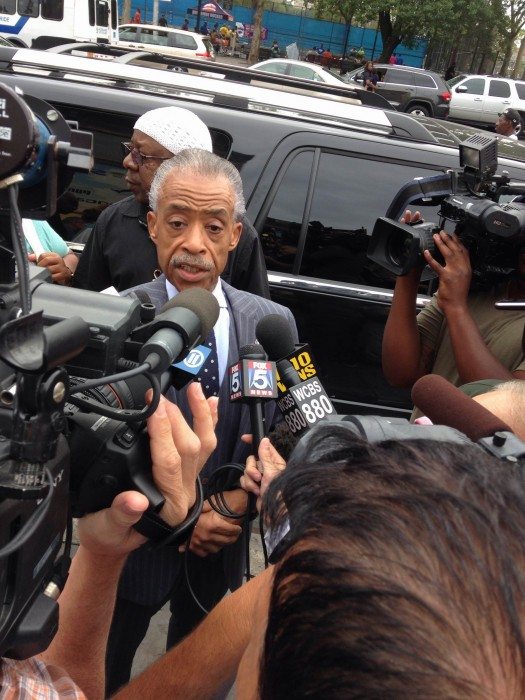 The mother of Anthony Baez, the 22-year-old killed by a police chokehold in 1994, was also in attendance. “They keep on doing the same thing as before like they can do anything they want,” Baez’s mother said.

Jose LaSalle grew up in the Bronx where police brutality has always been a part of his life. “I grew up believing this was normal,” he said.

In 2011, LaSalle’s stepson recorded one of his stop-and-frisk encounters when police called him “a f*cking mutt.” The recording inspired the short documentary, Hunted and Hated, which features eye-opening interviews with ex-NYPD cops about NYPD protocol.

LaSalle has been part of the Copwatch Patrol Unit for 3 years. He said the group receives complaints about police brutality on the sidewalk and through social media. The details of Eric Garner’s police chokehold are familiar to LaSalle; he works closely with the families of the victims, including the Baez family.

“They [police] are going to keep disregarding protocol,” he said.

Former NYC Council Member Robert Jackson reminded press that chokeholds are prohibited by the NYPD. “I’m so glad someone filmed it,” he said. “It shows us a lot.”

The officer who killed Baez was sentenced to seven and a half years in jail. The two cops responsible for Garner’s death have been placed on desk duty.

“It is important for people to rally around a situation like this,” Jackson said.

Eric Garner’s funeral will be held this Wednesday at Bethel Baptist Church in Boerum Hill.

Taylor Dolven is an “infinitely curious journalist” based in NYC. You can follow her on Twitter @taydolven.

One response to “#JusticeForEricGarner: “Today We Have to Be Scared of Cops and Robbers””