Earlier today, Maryland Governor Martin O’Malley talked with @julito77 on Latino Rebels Radio about how his state is addressing the growing number of unaccompanied minors entering the United States. Recently, O’Malley said that children who fled Central American countries should not be sent back to a “certain death,” winning kudos from many immigration rights activists. That comment led to a report that O’Malley was not welcoming minors into his own state. This week, the governor —pegged by some to be a possible Democratic presidential candidate for 2016— hosted a meeting with Maryland’s faith leaders about how the state is responding to the crisis and offering assistance. 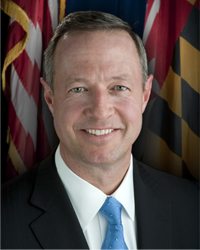 In today’s interview, O’Malley said that he sees “this as a humanitarian challenge, and we must respond as Americans and respond in humane ways.”

When asked about whether the White House is sharing a similar message when the Obama Administration is also trying to speed up deportations for recent arrivals, O’Malley said the following:

I think that when the White House is most effective is when they’re focused on alleviating the humanitarian crisis, and so… conversations that are centered on the well-being of the children who are on our doorsteps I think are the most productive conversations the White House can have. I think that at some portions of the day they’re trying to create those partnerships and other portions of the day they are being less effective. But I think they’re most effective when we look at alleviating the humanitarian crisis and finding safe home placements for children awaiting their due process on their asylum case.

I think we’re counterproductive when we try to move in the direction of a military response. As Congressman Joaquín Castro said, we shouldn’t be militarizing the border, we should be sending the Red Cross. These are children. They are hungry. They are starving. They’ve come across a harrowing trek through the desert, and on top of The Beast, and being muled and used in horrible ways. This is a humanitarian crisis, but it’s not one that’s beyond the capability of our country to deal with.

You can listen to the full 13-minute interview here:

Right after his comments about the White House, O’Malley added:

I mean, we’re a country of over 300 million people, and I have found in the course of this larger and better dialogue about the humanitarian nature of this challenge that there’s a lot of goodness out there and the hearts of people of every political description and every faith, and we believe as a country… I am absolutely convinced and I don’t care what the temporary polling may show… that there’s a lot more goodness out there, but it needs to be tapped by our leaders. And so I think the President’s most effective when he calls us to address the humanitarian crisis here. And in fairness to the White House, I suppose they’re worried that any messages of hospitality will trigger more children fleeing Honduras. I think that greatly overestimates how focused these children and their parents are on the President’s messaging rather than how focused they are on the murder gangs and the drug gangs that are out of control and overrunning a country, our neighbors just across our front yard.

Earlier in the interview, O’Malley talked about what Maryland is doing now to assist these children:

From the outset we have sought to do our part as Marylanders. We’re not the largest state in the Union, but we do have a role to play and I think every state and every city has a role to play to alleviate this humanitarian crisis. Many of us here believe that the best setting for children is to reunite the refugee immigrant children with relatives or family members who are already here in our country. We believe that a home setting is best and that the congregate setting is the worst, and should be the very last resort, so we recently pulled together a meeting of all of the faith leaders in our state, and it was very well-attended by men and women who have given their lives in many cases to safeguarding vulnerable children by placing them in safe, caring, and loving home settings.

And so that’s what I, we believe here in Maryland we need to do. So we’ve been encouraging our foster care providers to make sure that they enroll and become part of the network of federal foster care providers, which is separate from what our state maintains. I mean, we already have about anywhere from five to six thousand at any given point in the year who are in part of our state foster care. So we believe that with better partnership with our federal government, that we could all play a role in expanding the availability of the best home placements and home settings for children while they await their due process hearing.

There are some who may well have congregate settings because they already have that capacity, but those things take some time and they have to be properly staffed and in this case, not only with trained adults but with trained adults who also have language skills. And so we believe that the best way is to expand the existing networks of foster care providers and there could also be opportunities for parents that are, maybe they don’t meet the federal regulations for being foster care providers for these children because they don’t speak Spanish, but there could be opportunities through various churches and faiths to partner with families who taking a child in, and to help them either financially and in other ways to help get the child through this very traumatic period of their lives.

O’Malley also shared his thoughts as to how faith has shaped his position:

From the beginning of this humanitarian crisis, I’ve seen it as a humanitarian crisis. These kids are fleeing violence and escalating murders in their own home countries. I think it calls upon all of us to treat them with some compassion and the sort of kindness that every world religion says that we should show to strangers, especially if those strangers are refugees fleeing famine or fleeing war, or in this case, feeling death squads. I believe that it, I think, the Pope himself said recently that Jesus was a child refugee, fleeing the slaughter of the innocent. And I might add to that, thank goodness the Egyptian border patrol didn’t intercept the flight into Egypt and send the Holy Family back to Herod. So, we need to look at this for the humanitarian crisis that it is. And perhaps even there’s something that we can learn from strangers. Maybe there’s something we can all learn as Americans from this experience. When it comes to making our… being more engaged and more productive in life-giving partnerships with our neighbors here in the Americas.”

The governor also closed by sharing specific examples of his immigration record, which include the successful passing of a Maryland DREAM Act and the granting of driver’s licenses to undocumented individuals. A recent article by Buzzfeed chronicled how O’Malley has been earning the support of a growing Latino vote in his state.