The following video in Spanish tells the story of David Ernesto Orellana, an 11-year-old boy murdered in July by gang members in El Salvador. Although the video is in Spanish, the images speak for themselves. Not only did gang members from the Barrio 18 gang kill David, but members of MS-13 showed up at the funeral to try and kill another person.

According to a local report originally published on July 15 in Spanish, David’s body parts had to be reattached. What follows is our translation of one excerpt:

This is not sensationalism. But that child was beheaded, they mutilated his hands and ripped up his body. That’s why the undertaker’s assistant cried relentlessly when it was proposed to rebuild the body, at least, so his grandmother could see it whole. This is how serious the problem of violence is in the country.

They say the child could have been saved, that his mother sent $16,000 to the country for a coyote to take him to the U.S.

But the day the coyote went for him and his sister, David did not want to get in the car. He said he would stay to take care of what little he had left: his grandmother, who fainted the same day he was buried. She now says she does not want to live anymore.

His other sister went with coyote for the U.S., although it is now known whether or not she reached the territory.

But many believe that if David had gone with the coyote, he would still be alive. 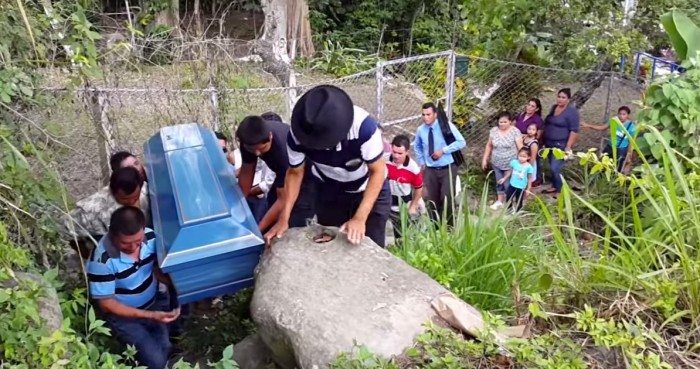 Then the funeral home employees gave the order to deposit the coffin with the help of two ropes. A few seconds later David’s grandmother fainted.

But suddenly, chaos erupted. The atmosphere was charged with tension and anxiety. Everyone’s nerves were shattered. My own nerves were visibly altered.

And all this happened when someone said that a pickup truck with armed gang members of Mara Salvatrucha (MS) was parked right below from the cemetery.

“Oh my God, they’s going to kill us!” cried an old woman. “They want to take one of us,” said another woman.

People began to call for police, and according to the account, it took 20 minutes for the police to show up.

“I thought, in those moments, that the country’s situation is so serious that police will now need to protect burials. That’s how bad this country has become.”

Soon, according to the first-hand account and the video, people began to slowly walk away in a single file. The young man the Maras were searching for admitted that he was the one they were trying to kill. People covered his face up and then found out that he was being sought all because he slept with one of the gang members’ “woman.”

As people got on the bus and rode away, a patrol car with soldiers and police officers showed up.

That child was deprived of his freedom on Friday July 11. His executioners tortured him. Police believe a dozen gang members were behind the crime. Why was he killed? Probably because David witnessed inappropriate behavior by the gang members.

The day David disappeared, he left school and went to buy tortillas for his grandmother. Every day he did that. But that day disappeared, and nobody saw him alive again.

The rest of the story everyone knows: they stabbed the boy. They split him into pieces. They dragged him. His face showed traces of how he was dragged along the ground.

Few know why David died. But nothing, absolutely nothing, justifies his death. You can also not justify why violence continues to become so blinded in our country.

And you wonder why children are leaving Central America?

By the way, we checked to see what US-based media outlets covered this story. A link to Christian Science Monitor covered part of it.