Estela de Carlotto, the leader of Argentina’s human rights organization “Abuelas de Plaza de Mayo,” has finally found her missing grandson after more than 35 years of searching. Her daughter Laura disappeared during the last dictatorship and gave birth to a son, Guido Carlotto, in a military hospital on June 26, 1978.

Guido Carlotto is named Ignacio Hurban and is now 36 years old. He decided to get a DNA analysis after having doubts about his identity. His mother, Laura, was kidnapped with her partner when she was 23 years old in 1977. She was two-and-a-half months pregnant. Several witnesses said that she gave birth to Guido and was only allowed to be with him for five hours before they transferred her to another detention center.

Two months later, Laura was killed and her body was returned to her mother.

Estela started her fight side by side with the Madres de Plaza de Mayo in their traditional peaceful protests against the disappearances of the dictatorship. Later, she joined the Abuelas de Plaza de Mayo, which was founded in 1977 to search for the estimated 500 children who were kidnapped or born in detention centers during the last dictatorship (1976-1983). The systematic stealing of babies was common during the dictatorship and many babies born in military centers were handed over to be raised by military families.

The Abuelas found a way to match a grandparent with a grandchild through DNA with 99.9% accuracy thanks to doctors Mary Claire and Cristian Orrego from the University of Berkeley who helped established the National Genetic Bank in 1987. Since then, 114 grandchildren have been identified (Guido Carlotto is the 114th). The organization has been nominated five times for the Nobel Peace Prize.

Yesterday, Estela de Carlotto, 83, spoke at a press conference. “Now I have my 14 grandchildren. He will fill the empty chair and picture frames,” she said. “I didn’t want to die without hugging him.” 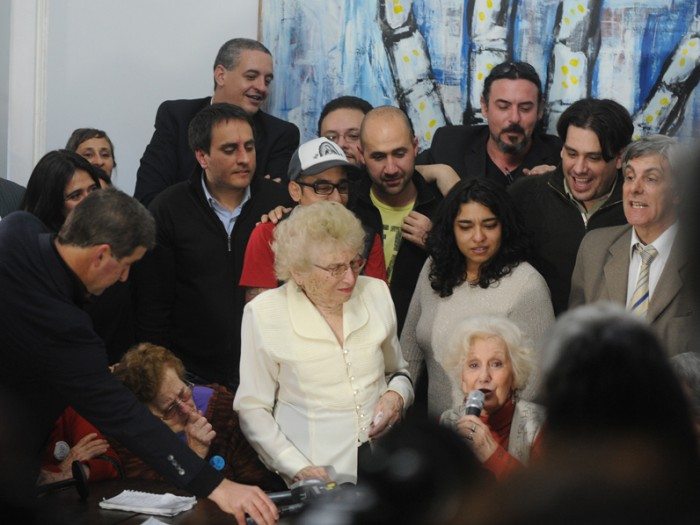 According to witnesses, while in captivity, Laura said, “My mother is not going to forgive the military for what they are doing to me. And she is going to chase them as long as she is alive.”

She never stopped looking and today she announced that the search was over.

“Today there is no media, even those that don’t like us very much, that won’t say that this is a triumph for Argentines,” Estela said. “To the rest of the Abuelas: the kids are out there, they are there hoping that we keep looking for them.”