Remember earlier this year when Nate Cohn of The New York Times let the world know that a significant number of U.S. Latinos were becoming more “white” by misrepresenting a study that had yet to be finalized?

This week that study was finally published. Here it is:

America&#x27;s Churning Races: Race and Ethnic Response Changes between Census 2000 and the 2010 Census

The researchers also wrote about the study on the official site of the U.S. Census. Here is a portion of what the group concluded:

We find that race and Hispanic origin responses changed for about 9.8 million people (or 6 percent). In the study, we estimate that about 8 percent would have changed their race or Hispanic origin between censuses if the study data were nationally representative.

The table below shows churning and stability among single-race groups and multiple-race groups, by Hispanic origin. Responses changed across all race and Hispanic origin groups, especially among American Indians and Alaska Natives, Native Hawaiians and Other Pacific Islanders, people who reported multiple races, and Hispanics who reported a race. Responses were generally stable among single-race non-Hispanic whites, blacks, and Asians. 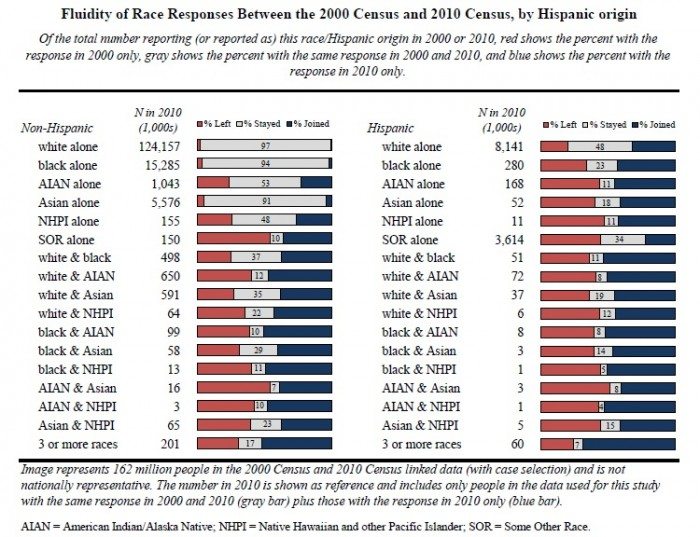 We conclude that a racial or ethnic group does not necessarily include the same individuals over time even if cross-sectional data show small net changes. Researchers who use race and Hispanic-origin information will need to take into account the possibility of response changes when interpreting results.

We wonder if Cohn will take back his initial reporting? He clearly only reported one part of the study and made some incredibly sweeping generalizations that never made sense to us. As we always expected, the conclusion was much more nuanced and complex. Cohn and the Times were irresponsible in pushing a narrative that quite frankly, was just a myth. But don’t take our word for it. Read what others had to say about it.