Just to Be Sure, Head of MSNBC Apologizes One More Time to NAHJ Journalists About ‘Cinco de Mayo’ Fail

Yesterday in San Antonio during a luncheon on media and diversity at the National Association of Hispanic Journalists (NAHJ) conference, MSNBC president Phil Griffin addressed the now infamous “Cinco de Mayo” fail. Here is what Richard Prince of the Maynard Institute reported: 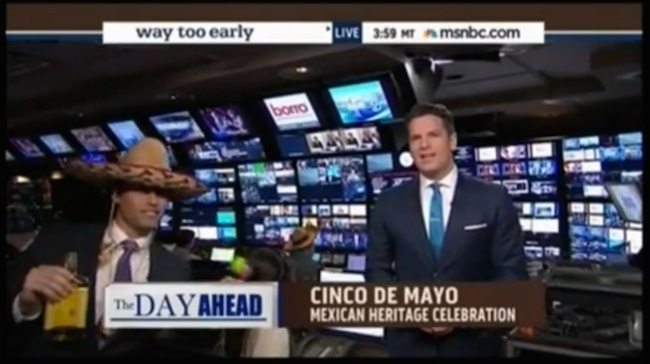 A contrite Phil Griffin, president of MSNBC, apologized again Friday for a May Cinco de Mayo skit on his network that Hispanics found offensive, and he agreed with a wide-ranging list of complaints from Latino journalists.

Those concerns included the need for more Latinos behind the scenes and on the air, objections to having to tone down Spanish accents and pronunciations, and the inclusion of Afro-Latinos along with their lighter-skinned brethren.

“It’s important. We want to lead the way” on diversity, Griffin told attendees Friday at the National Association of Hispanic Journalists convention in San Antonio’s Henry B. Gonzalez Convention Center, a centerpiece of the city’s celebrated River Walk area downtown.

“A cultural change” must take place at the network, Griffin said. “We’ve got to be honest.”

You can read the rest of Prince’s story here, which includes promises from Griffin about diversifying Latino talent at MSNBC and comments from Alex Nogales of the National Hispanic Media Coalition (NHMC).