Just when we thought we would stop bringing up the fact that The New York Times’ Upshot blog has a serious ‘Latino problem’ when it comes to presenting stories about U.S. Latinos, along comes this, which our founder @julito77 tweeted this afternoon:

Actual photo used by @UpshotNYT in piece called "It's Not Too Late for Republicans to Win Latino Votes" Come on, guys pic.twitter.com/ucWr5plnss

That image, taken last year in October, is the only photo included in a political analysis piece by Lynn Vavreck entitled, “It’s Not Too Late for Republicans to Win Latino Votes.” Vavreck’s piece is somewhat serious and her conclusion is nothing shocking (Republicans are not that popular with U.S. Latinos), but the photo of people dancing and laughing in traditional Colombian folkloric costumes sends the same old stale and insulting message the mainstream media continues to perpetuate: U.S. Latinos are “foreign,” “exotic” and live in some surreal Carmen Miranda alternative universe.

And you HAVE to love the caption:

The Hispanic Day parade last October in New York. The political clout of Latino voters in the United States, although weaker on the congressional level than raw numbers would suggest, is increasing.

Talk about a non sequitur.

Was it that hard to choose another image? Even a photo of a Latino Republican (all three of them) would have worked, but why that picture? What does a photo like that communicate? Oh yeah, we forgot: that editors in major news outlets have no clue about U.S. Latinos because those outlets don’t have actual U.S. Latinos is newsrooms. Why actually try to find an image that is more editorially connected to the topic at hand? That would be too hard.

So instead of getting images that could have accurately accompanied Vavreck’s piece, we get the following Facebook post: 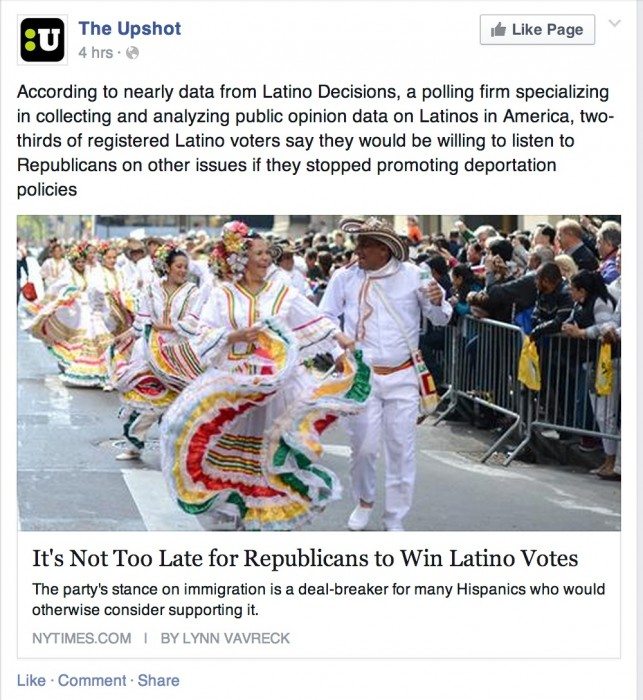 As you might imagine, many of our friends and fans are already talking about this latest gaffe:

@julito77 @UpshotNYT You have got to be kidding?

@julito77 @latinorebels So weird. That's exactly what I wear to the voting booth. #nomames @UpshotNYT

@julito77 I expect the @UpshotNYT will use an image from a St. Patrick's Day parade the next time they publish about white voters. Right?

@julito77 Who thought this was a good pic 4 the article/signed off? It's like the elephants I've seen wearing sombreros @vavreck @UpshotNYT

One Facebooker said, “Hey, thanks for the photo showing EXACTLY how we dress every day!”

That’s the problem. Just another example of lazy editing, Upshot-style.

FYI, Julito sent out tweets to the Times’ public editor and Vavreck. We will see what happens next, even though the damage has already been done.