Just When You Thought Politicians Couldn’t Get More Racist, Alaska’s Joe Miller Outdoes Them All

Looks like Alaska’s Joe Miller, an actual Republican candidate for the US Senate, has gone all-out in the racism department during his primary campaign. Here is what one Alaskan tweeted out earlier today:

We really thought it was a joke, but then we saw a post from The Immoral Minority blog, entitled “Joe Miller’s most recent mailer probably could not be more racist.” The blog starts, “A Facebook friend of mine received this the other day and simply could not believe what he was seeing.” Miller’s ad claims that Senator Mark Begich (D) is allowing for “20 million illegals” to vote, which would then lead to the end of the 2nd Amendment. Add a few gang pics, Miller with a rifle and you are good to go! 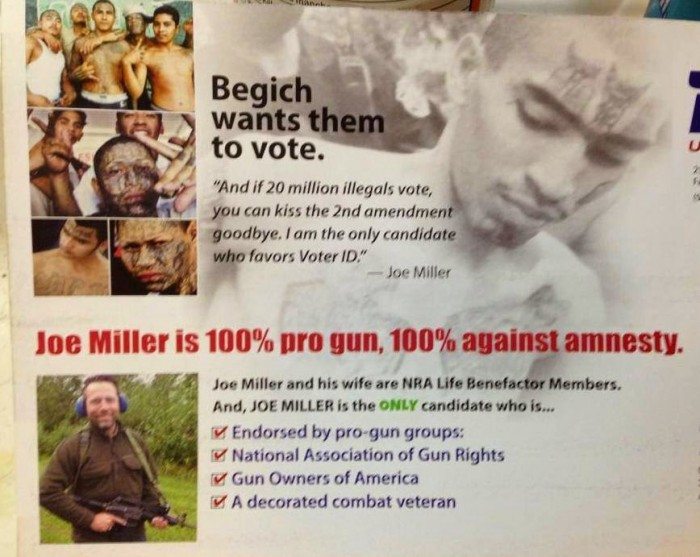 Yeah, we can’t either. Miller, who tried to win a Congressional seat in 2010 but lost, is cranking up the racism for a upcoming primary battle on August 19:

The Aug. 19 Alaska primary will determine who takes on Sen. Mark Begich, one of the half dozen vulnerable Democratic incumbents whose fates will decide which party controls the Senate. For Miller, it’s an attempt at a second act; with Sarah Palin’s endorsement, the Fairbanks lawyer beat Sen. Lisa Murkowski in her 2010 GOP primary, only to lose the general election to her write-in campaign.

Since then, Miller’s become much more unpopular, and the campaign feels more like a personal vendetta than a tea party crusade. Polls show him trailing Lt. Gov. Mead Treadwell and former Alaska Attorney General Dan Sullivan. Palin has stayed out of it.

We have no more words for this, except the fact that Miller is not only racist, he is also one insane immigration extremist.