Marina Silva Is the Leader Brazil’s Been Waiting For

In the lead up to this year’s FIFA World Cup, the general consensus was that Brazilian President Dilma Rousseff needed to pull off a successful tournament in order to solidify her chances of winning re-election this fall.

At one time enjoying huge voter support, Rousseff has seen her popularity take a few blows since protests erupted during the 2013 Confederations Cup and Brazilians learned of the over $11 billion Brazil would spend to host the World Cup—money that should’ve been spent on much needed infrastructure projects and education reforms.

Brutal police crackdowns on protesters in 2013 and 2014 have many progressives in Brazil and abroad convinced that Rousseff’s Workers’ Party, once a vanguard for liberal activism, has drifted to the center and now no longer represents Brazil’s true left.

It was through the harsh suppression of protests —and the even harsher “Black Bloc” tactics employed by protesters which turned off many moderates— that the 2014 FIFA World Cup went off (almost) without a hitch. Even still, Rousseff emerged from the tournament dead even in a runoff poll with her main challenger, Aécio Neves, a senator of the Social Democracy Party. (Rousseff’s approval rating, at 36, nearly doubled Neves’ rating, but it wasn’t enough to avoid a runoff.)

Eduardo Campos of the Socialist Party was polling in a distant third place at around 8 percent.

Then tragically, a plane carrying Campos and six others crashed in the coastal city of Santos on Aug. 13, killing everyone on board.

Nonetheless, out of that terrible affliction comes a new progressive challenger who seems poised to knock Rousseff from on high. Her name is Marina Silva, Campos’ running mate on the Socialist ticket. And by most accounts, she’s Brazil’s most popular leftist crusader—the Brazilian Elizabeth Warren. 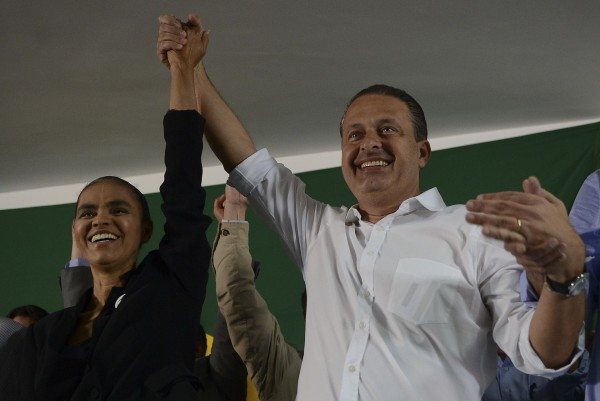 Marina Silva (left) in a 2013 photo with the late Eduardo Campos. (José Cruz/ABr)

Born and raised to a family of rubber tappers in the western border state of Acre, deep in the Amazon, Silva worked as a rubber tapper herself before becoming an early organizer for the fledgling Workers’ Party in the 1980s, campaigning alongside fellow rubber tapper and famed environmental activist Chico Mendes from a neighboring town.

In 1994 she became the first former rubber tapper to be elected senator, and when Workers’ Party founder Lula da Silva (no relation) assumed the presidency in 2003, he made Silva Minister of the Environment, naturally.

She would resign the post in 2008 and leave the Workers’ Party altogether in protest of her boss’ increasingly environmentally unfriendly policies.

Silva ran for president in 2010, but being the Green Party candidate, she received only a fraction of the funding and airtime afforded her opponents, one of whom was Lula’s own handpicked successor, Rousseff. Silva earned a respectable 19 percent of the vote, though it wasn’t enough to force a runoff election with any of the other candidates.

Meanwhile, in 2007, she became one of only a handful of Latin Americans named Champions of the Earth by the United Nations. A year before the 2010 presidential campaign, Silva won the Sophie Prize, awarded each year to an individual or group whose efforts have advanced the cause of environmental protection and sustainability.

Perhaps her most high-profile moment to date came when she was chosen by the International Olympic Committee to be one of eight flagbearers to carry the Olympic flag at the 2012 London Games. Brazil’s O Globo ran a headline the next morning claiming “Marina Silva stole the show from Dilma,” who had been shocked to see her political rival parading in front of her during the opening ceremony.

Silva’s road from a failed (albeit popular) presidential hopeful in 2010 to a serious contender for the Palácio da Alvorada has mostly been a matter of chance.

She tried to start a new party in 2013 —though she considered it more of a movement than a party— but when she sought to register her “Sustainability Network” ahead of the 2014 election, it failed to receive the 492,000 signatures required by Brazil’s Supreme Electoral Court. The court’s decision came late on Oct. 3, and since candidates must be members of a registered party at least one year ahead of elections (this year’s elections fall on Oct. 5), that left Silva two days to pick a party to run with.

The day after her new party failed to register, she joined the Socialist Party and earlier this year was nominated as its vice-presidential candidate. Campos, the guy at the top of the ticket and one of the least known of the presidential candidates, was now running with arguably the most popular woman in Brazil—even more popular than you-know-who.

Still, few voters are likely to cast their ballots for a third party candidate simply because he has a famous running mate. Polls showed the Socialists trailing both Rousseff and the Social Democracy’s Aécio Neves at a distant third after the closing of the 2014 World Cup.

Campos’ awful passing seems to have change all that.

And that’s not to make light of the crash that took the lives of seven people. I’m not saying it was some sort of blessing in disguise or something. It wasn’t. It was horrible.

But Campos’ death may ultimately do more to advance the principles he pushed for than his presidential campaign ever could have.

All that’s needed at this moment is change, a new face in charge —hell, even a new party in charge— to get Brazil back on the right track.

The Workers’ Party has moved the people of Brazil along in wonderful ways, especially under its former president, Lula. His Bolsa Família, which provides financial assistance to 50 million people in 12 million families across Brazil, is widely considered the largest social welfare program in the world and the main reason why poverty fell from 22 percent to 7 percent during Lula’s presidency.

But in the end, even the great party of the people isn’t immune to greed, corruption and bloating. And just like a few other leftist parties I can point to in Latin America that claim to stand with the people, the Workers’ Party is now as crooked as the number 7.

The Workers’ Party is no longer the workers’ party, fighting for their rights and well-being. Today the Workers’ Party fights for the bureaucrats, the technocrats and those who would destroy the earth’s finite riches just to bump GDP up half a percent or two.

As Silva herself said in a Forbes interview last year:

“While former president Fernando Henrique Cardoso was able to give the matter of economic stability its rightful place, and former president Lula da Silva was able to maintain that stability and use it to diminish poverty, the current government didn’t follow that path. Our current president didn’t actually add anything new to the agenda, in fact she promoted major setbacks, like the deforestation bill, and she doesn’t think about sustainable development, which should be a flag for mankind. A country like Brazil should not be exclusively dependent on its natural resources; there should be more investments in technology, and a good knowledge basis. We must have a strategic vision instead of insisting on old models.”

In another interview with the Economist that same year, Silva hit the nail on the head when she criticized Pres. Rousseff for her paternalistic attitude toward the Brazilian public, imposing the ruling party’s social and economic programs on Brazilian society whether it wants them or not. “If you govern according to a program,” she said, “you can’t ignore society in implementing that agenda. You can’t think that this is something you can ‘do to’ society without having created that agenda together with society.”

The people of Brazil are ready for someone like Silva. Those who would support her campaign are the same people who supported the protests of 2013. They’re younger and more educated (kind of like Sen. Warren’s supporters).

After years of bread and circuses, what Brazil truly needs is a great reformer, a great leader.

Marina Silva is exactly the woman Brazil needs at this crucial moment.