Andrew Thomas, the Arizona Republican candidate for governor who produced one of the most racist political ads we have ever seen, declining an August 20 candidate forum organized by the conservative LIBRE Initiative group and Univision, which broadcast the forum and translated it to Spanish.

Apparently Thomas had issues with the whole concept of the forum. Here is what his profile tweeted on August 18:

I am declining to participate in a balkanizing debate hosted by the Libre Foundation and Univision 8/20. See my FB page for explanation. 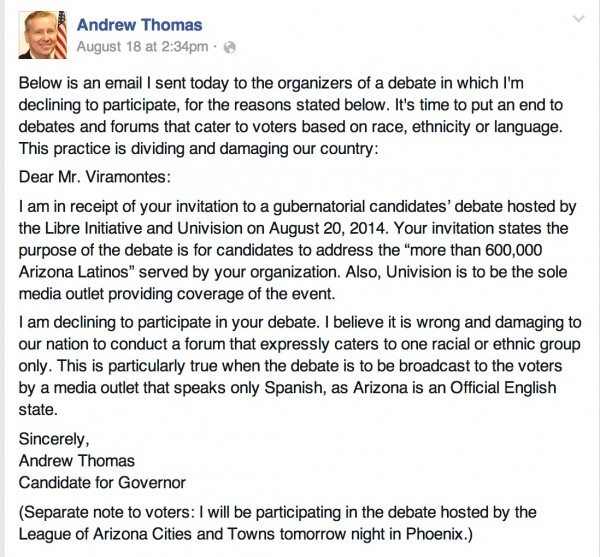 Ironically, the LIBRE Initiative claims to be a “non-partisan” organization, but with funding by the Koch brothers, the group is center-right, aligned to the GOP and is attempting to soften the narrative when it comes to Republicans and U.S. Latinos voters. Nonetheless, according to Thomas, LIBRE is just another La Raza front. The irony has been duly noted.

Arizona Central added more about the forum in an August 20 report:

Viramontes said he was disappointed Thomas chose not to participate.

“Latinos make up one-third of the state, of which two-thirds speak Spanish. With such a large and important constituency, it’s disappointing that any candidate for statewide office would not want to share their vision to a captive audience,” he said.

Viramontes said earlier Wednesday that [Doug Ducey] had tentatively agreed to the debate weeks ago but backed out Monday, citing a prior engagement. Ducey’s campaign said they never committed to attend the event.

Viramontes called the Republic late Wednesday to say he had confused Ducey, [Frank] Riggs and Thomas, and that Ducey had never promised to participate.

By the way, for those keeping score at home, Arizona has a lot of Latino voters.