It has not been a good week for editors at Big Journo. First, The New York Times went through some online pain for a “Picking Crops” headline about Latino farmers. Now, The Washington Post had to issue an apology (actually, a non-apology) for a “We’ll need more fajitas” subhead about a story on HUD Secretary Julián Castro.

Here is what the Post’s Al Kamen wrote on Wednesday:

“Imagine our dismay Tuesday morning when we opened the paper to read a most offensive subhead atop a Loop item about Housing and Urban Development Secretary Julian Castro and his staff. The copy editor who wrote it —a brilliant and supremely reliable colleague who had a bad day— was attempting to evoke the Texas origins of the secretary and his aides. He has apologized.” 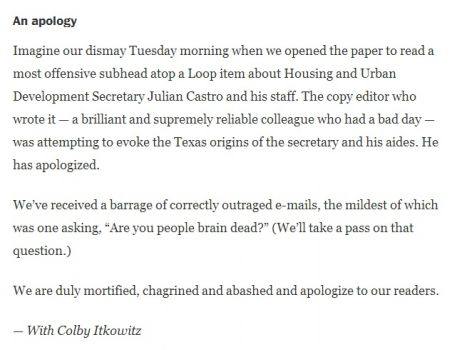 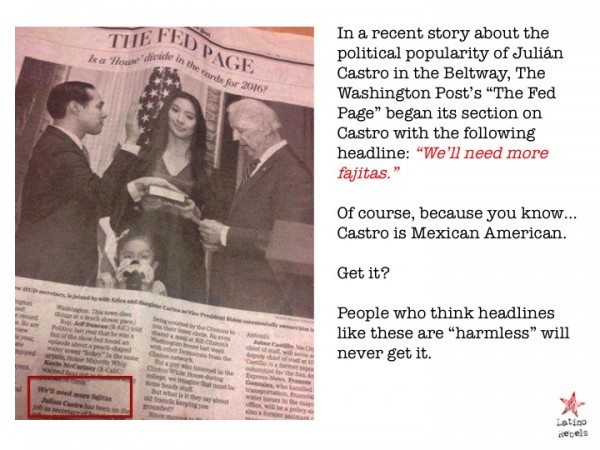 Here is what MySantonio.com reported yesterday:

The article, which was published Tuesday in a political blog In The Loop, described how the former San Antonio mayor has quickly become “a man about town” in D.C., including a dinner with former President Bill Clinton and former Secretary of State Hillary Clinton, but did not mention any types of food, including fajitas.

The headline was changed to “Castro aides with him” at some point Tuesday.

Mekahlo Medina, the president of the National Association of Hispanic Journalists, said the organization was “shocked to see the subheadline” and “amazed that it could get through a litany of editors before it got published.”

“It is a clear reason why media companies like the Washington Post need more Latinos on staff,” Medina told Express-News. “They not only help improve their coverage of the Latino community,” but also help the news organization do so fairly and sensitively.

Looks like this whole “Latino problem” applies to Beltway media, in general. It needs to stop. Like right now.