Immigration Activists Charged with ‘Felony Lynching’ for Protesting in #Murrieta

This story came via Raw Story, which referred to a local Bangor, Maine, paper about how a Bangor native and four other immigration activists have now been charged with “felony lynching” after protesting in Murrieta, California, on July 4.

Mathieson and other pro-immigration activists traveled to Murrietta [sic] a few days later because they heard other busloads of detained migrants were expected to arrive. The buses didn’t come, but there, in temperatures that topped 100 degrees Fahrenheit, they found themselves in a tense situation with people demonstrating against the migrants, Mathieson said. There was yelling. Then she noticed someone in her group had been pushed, and she went to check on that person. Several of the people in the pro-migration group identify as queer, she said, and people on the other side of the issue were yelling homophobic slurs at them. It was an intense moment.

“You can see that we are walking away,” she said.

But officers arrested all five, charging each of them with a count of felony lynching, described in documents filed Aug. 1 at Riverside County Superior Court as two or more persons acting together to take a person from the lawful custody of a police officer “willfully and unlawfully by riot (use of force and violence and the threat thereof).”

“As with any case, we reviewed the evidence presented to us by the law enforcement agency who investigated the case and filed what we believe are the appropriate charges,” John Hall, senior public information specialist with the Riverside County District Attorney’s Office, wrote in an email to the Bangor Daily News.

Mathieson’s arraignment is scheduled for Sept. 3, he said. In addition to the felony lynching charge, she also is charged with assault on an officer, a misdemeanor charge.

Besides Mathieson, the other protesters arrested were Jacqueline Sanchez, Salvador Chavez, Pouyan Bokaei and Jessica Rey.

Interestingly enough, the group has been promoting its case online via Tumblr: 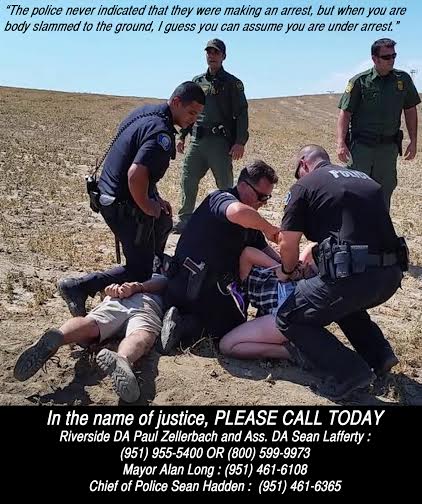 Besides the Tumblr page, there is also an online petition, asking that Murrieta drop the charges:

We are calling on the City of Murrieta (specifically the District Attorney of Riverside County, Paul Zellerbach and the Assistant District Attorney, Sean Lafferty) to drop all charges against Jacqueline Sanchez, Salvador Chavez, Pouyan Bokaei, Jessica Rey and Janet Mathieson. Demonstrations of Free Speech and the filming of events should not be met with Felony charges and Protestors should not face up to 4 years in prison for exercising their first ammendment rights. Please stand with us in demanding Justice for these individuals.

You can read a first-hand account of the July 4 incident here.