#SomosFerguson: The Deadly Effects of Anti-Black Sentiment & Police Brutality in the Latin@ Community

The perception that Latin@s have been silent about Michael Brown’s murder and the images of police brutality witnessed in Ferguson since then has captured the attention of many in social and mainstream media. Recently, a Colorlines article was published called the “Pew Survey Explores Racial Attitudes Toward Ferguson Crisis.” The piece was originally called “Do Latinos Care About Ferguson?” Such a headline sparked some conversation among Latin@s who took this question to heart. The crux of the article centers on this piece of data: Only 18% of Latin@s surveyed by Pew admitted to following what is happening in Ferguson. While I am not convinced that the study accurately captures what Pew really wanted to ask (which of course is part of the problem), I also don’t think we need to throw this out for debate—we just need to ask more honest questions about Latin@s and race.

So what are we really trying to ask here? Pew and others could be asking “What is the Latin@ perspective on Ferguson?” Or, to put it more bluntly, “Do Latin@s care about Black people?” Although many Latin@s do identify as Black and Afro-Latino, the prevalence of Anti-Black sentiment among the Latin American and Latin@ community still needs more conversation to begin unearthing the deadly effects of Anti-Black sentiment among our people. 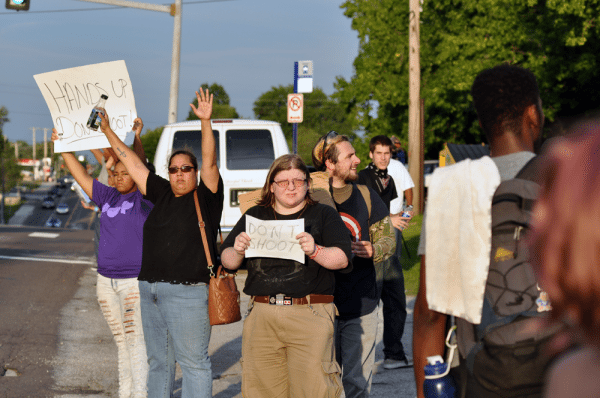 Not coincidentally, other think pieces were written about this very topic at the same time. See Ferguson Needs Latino Allies, Too, Latino Communities Must See Ferguson’s Fight As Their Own  and this video commentary. This list isn’t exhaustive but these sources have been most prominently shared on social media.

“What is the Latin@ perspective on Ferguson?” is valid and necessary to explore. As a majority-minority population, Latin@s are in danger of being used as racial pawns to tip the scales of White Supremacy—its polices and practices.  But the question cannot be captured in just one answer: that being that many Latin@s and Latin Americans hold Anti-Black sentiments. This is a start, but it is not sufficient. And, what I am about to suggest are possibilities that I believe are rooted in Anti-Black sentiment, but we now have the opportunity to see how Anti-Black sentiment manifests in our communities.  That’s why these think pieces are very important because they help us begin to explore some possibilities in where Latin@s stand in Ferguson.

So what are the possibilities? Here are a few:

You get the picture now?  There is an active media agenda to make certain populations continue to look like the aggressors in certain areas: Black people in regard to protests about race, Latin@s about immigration.

None of this is a coincidence.

But there are few things we can do:

By taking a closer look at police brutality, detention and deportation, and racially and ethnically motivated hate crimes, we should agree that Latin@ population is the second most affected group after the Black population (with the exception of deportation: Latin@s are number one there). Thus, the issue that we can all agree that all of our communities are affected by the most is police brutality.  Recently, a report was released suggesting that Latin@s now are the largest population to be held in private detention centers.

And now, hear me out, people: if you think government cops ain’t loyal, authorities in detention centers for damn sure ain’t loyal, either. If there is any time to build coalitions it is around this modern-day form of Jim and Juan Crow: police brutality and the mass detention of Black and Brown bodies. Between Stop and Frisk and SB1070 and Secure Communities—it is damn near illegal to be Black, Brown and outside. Every 28 hours a Black man is killed by an armed official —but if we were to include Black and Brown bodies being detained by armed officials— this number would increase.  If we were to collect the number of stories of police brutality from our people —this number would be staggering— and I would venture to say that we wouldn’t have to wait 28 hours.  Police brutality is the issue we must attack because we are all affected by it.  And it doesn’t end: a 8-year-old girl was tazed, and it has been justified by the South Dakota court system.

To bring it all together: it is imperative for media and academics to frame issues ranging from immigration to the death of a yet another unarmed Black child from a police brutality perspective.  I am not suggesting that immigration should ONLY be viewed from this perspective, but if we think about the abuses of power by authorities over a group of people such as those who are undocumented, who virtually have no rights in the US, then we must understand how police brutality has affected Latin@ and other immigrant communities as well. Dissecting the problem is not enough: we must now begin to frame issues in a way that isn’t following the status quo or what we are accustomed to seeing through the eyes of media. We must demand Univision and Telemundo and other networks who have large Latin American and Latin@ audiences to provide more educated coverage on police brutality, that they not sensationalize Black protests and make them seem as if they are random acts of violence. And in this case, the source of Black protest in Ferguson, Missouri is police brutality.

It is not a coincidence that several think pieces called into question the role Latin@s have in Ferguson. But it is also not a coincidence that those Latin@s who are calling for action continue to be silenced: on the one hand, media and the public only wants to perceive Latin@s as singular issue people (i.e. immigration). By including Latin@ voices to the protests, media would be legitimatizing Black voices and Black pain. By including Latin@s in the education of police brutality, Latin@s no longer become a singular issue people.

Latin@s must be careful that they do not become racial pawns in the chess game called White Supremacy. Once Latin@s acknowledge Anti-Black sentiments within our bodies and our communities, we can ensure that we will not be the chess pieces to tip the White Supremacy scale. Once Latin@s are educated about the ways police brutality affects our people —via Secure Communities, via polices like SB107-0, via policies like Stop and Frisk— we can end the practices that maintain police brutality as a viable weapon against all of us.

What is the Latin@ perspective on Ferguson?  The answer is right in front of us.

Blanca E. Vega is a currently a doctoral candidate at Columbia University, and is also the Director of the Higher Education Opportunity Program at Marymount Manhattan College. Her blog is called Race-work, Race-love and you can follow her on Twitter at @BlancaVNYC.

2 responses to “#SomosFerguson: The Deadly Effects of Anti-Black Sentiment & Police Brutality in the Latin@ Community”