This Is What Passes for ‘Satire’ These Days: Illegal Immigrant Barbie

Chuckle, chuckle, oh these witty comedy sites. Take the example of the latest “satire” written by Janet Eve Josselyn for the Points in Case site. Josselyn —who calls Dover, Massachusetts, her home (you should know that Dover is one really white and rich town)— decided to get all “witty” with her “humor” in a piece called “Six New Barbie Dolls That Reflect 21st Century Women.”

Josselyn, who is also the author of Thin Rich Bitches, begins with this:

The Barbie doll is an icon, a role model, and a reflection of women through many decades. Since Barbie’s introduction in 1959, Mattel has repeatedly attempted to modernize Barbie’s fashion and career choices. Once relegated to girlfriend status and domestic housework, Barbie has evolved into a modern woman who has pursued many jobs and professions, such as Architect Barbie and Doctor Barbie. Mattel has not made much effort, however, to bring Barbie into the 21st century. These new Barbie dolls will provide girls with contemporary alternatives to existing Barbie dolls. 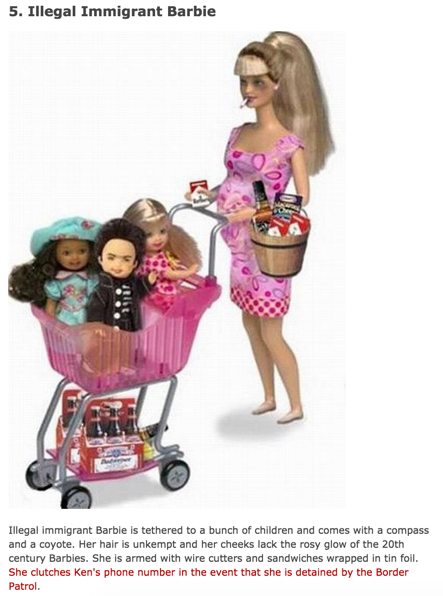 That’s New England elitist “wit” for you. It’s as bad as it gets, because you know, when you live in a town with only 78 Latinos, your worldview can get a bit (dare we say it?) racist. (BTW, she closes with Lesbian Barbie… of course she does.)

A complete #NoMames, coming from a Doverite who lists her school as Harvard on her Points in Case bio, but actually went to Colby and then attended the Harvard University Graduate School of Design. Design school? As they say in society circles, going to Harvard design school doesn’t count as real Hahvahd.

Yay, elitist and racist humor! So intellectual! So provocative!

3 responses to “This Is What Passes for ‘Satire’ These Days: Illegal Immigrant Barbie”