We received the following released this weekend, and we would like to share it (we also added photos from today’s action in Phoenix): 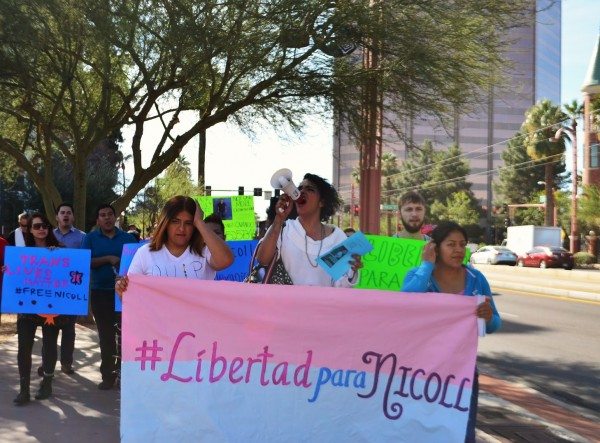 A growing national movement calling for the end of detention of LGBTQ immigrants and the release of Nicoll Hernández-Polanco (A089-841-464) will be escalating the week of March 2nd-5th. Nicoll is a Guatemalan transgender woman currently detained by Immigration & Customs Enforcement (ICE) in an all-male ICE facility in Florence, AZ. Nicoll presented herself to border patrol agents at the United States border in October 2014 and immediately requested asylum after suffering nearly a decade of sexual and physical violence in Guatemala and Mexico because of her gender identity. Instead of finding safety, Nicoll has experienced continual sexual harassment and abuse for being a transgender woman at the hands of ICE staff and other detained immigrants.

Nicoll’s experience is very typical for immigrant trans women in detention. As recently reported by Fusion, although transgender women make up only 1 out of every 500 detainees, they make up a shocking 1 out of every 5 substantiated cases of sexual assault in immigration detention facilities.

Even though a Tucson-based LGBTQ community group, Mariposas Sin Fronteras, is assisting Nicoll and is willing to house and care for her during her asylum case, ICE has refused to release her. ICE claims that her past deportations when she was an unaccompanied minor trying to flee transphobic violence render her a priority for detention under President Obama’s recent immigration executive action announcement.

Karolina López, a formerly detained trans woman stated, “I know perfectly well the detention conditions Nicoll is experiencing and it can only be summarized in one word: inhumane.” Viviana Serrano added, “As a trans woman in detention, I was once in Nicoll’s shoes. This is why I know the urgency in getting her released now. We demand her immediate release because ICE is incapable of ever providing her with a safe environment.”

Isa Noyola, Program Manager at Transgender Law Center, concluded, “Our communities are rallying together demanding her release and an end to immigration detention for all transgender women.”