One Size Does Not Fit All: Body Image and Ethnic Identity on TV

Health and wellness is a touchy subject, and so before I dive into it, I want to make a couple of things clear:

Now that I have that out of the way, I hope any comments on this article take those two things into account. The impetus for this article was an observation my wife made while we watched TV the other night, which was: 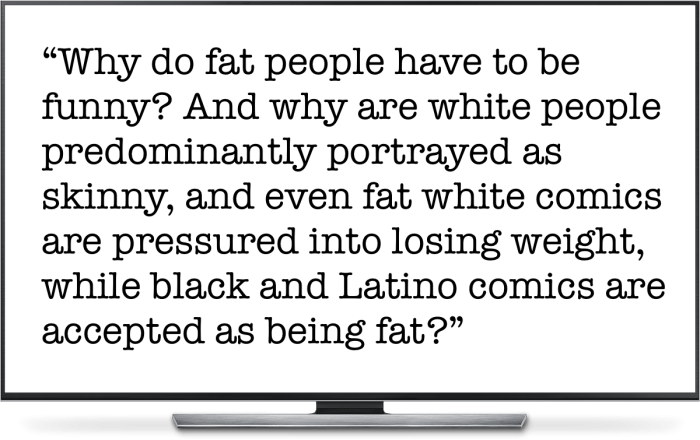 After considering several shows and actors/actresses, we came to the conclusion that, yes, with the exception of mobsters or monsters like Mo’nique in Precious, fat people are expected to provide laughs, and overweight white actors and comedians, once they become famous, are often pressured into losing weight. While there are exceptions to this rule, most famously Jennifer Hudson, overall this discrimination based on socially accepted notions of how certain ethnicities look, holds water.

The two problems presented here —the lack of complex, dramatic roles for overweight actors and actresses, and the lack of pressure on black and Latino actors and actresses to be as skinny as white ones— are interrelated. Think of the roles most often written for white characters. They tend to be the leads, they carry the emotional weight of the show on their shoulders, and they are often placed in archetypal roles such as the hero or the villain, and in each case those roles are expected to be strong and/or menacing. The social expectation for such roles is someone who is physically fit. Blacks and Latinos are most often given sidekick roles, supporting roles which lend themselves to being either funny or enlightening. In each case, the expectation of what those characters look like has little to do with fitness, and so it is acceptable that the actors portraying them to not be in the best shape.

The fitness community, sadly, has increasingly become synonymous with softcore porn. (Read here for a great article on the subject.) The bodies are perfect, the models are in positions that are often sexual, or they simply are more or less nude, and the image this promotes is that fitness cannot be achieved unless you have a sexually appealing body that is ripped with muscles. This image compounds the social concept of “beauty” which is portrayed via magazines and various media and for women includes perfectly formed breasts on a thin frame, maybe even a round butt but only when proportional. For a person dealing with weight issues, the ripped, overtly sexual fitness world may seem too intimidating to pursue, while the rail thin fashion world genetically impossible to obtain. So how exactly are overweight people supposed to feel comfortable about being healthy when their two options are either unappealing or unattainable?

Before anyone accuses me of race-baiting (Aren’t whites as much victims of those representations as minorities? Yes, but in different ways.), it is a proven fact that obesity rates are higher amongst blacks and Latinos than it is amongst Whites. Look here for a chart that breaks down obesity rates amongst ethnics groups across the country. According to the Kaiser Foundation, in the United States as a whole, 62.8% of whites, 72.7% of blacks, 68.4% of Hispanics, and 68.1% of Native Americans are either overweight or obese. The sole group that is under 50 percent are Asians/Pacific Islanders at 41.3%.

How does this tie into representation on TV? As I stated before, all ethnicities suffer from the societal pressure to be either beautiful or fit or both, but amongst whites the pressure comes from an expectation to be skinny, while amongst Hispanics and blacks the expectation is to be obese. Think of the depiction of average, everyday people on television. An average white American family is pretty much all skinny or close to it, unless the character just had a baby or they are a funny uncle/aunt.

The only time a fat person is depicted in a lead role, like in Mike and Molly, they are, again, funny. Recently, Melissa McCarthy lost a lot of weight because it would help her get different roles. Jonah Hill and Seth Rogen also lost weight so they could be offered a wider variety of roles. Even Roseanne, the epitome of the working class housewife in the 80s and 90s, now has lost weight, as is evident from her recent guest appearance on Cristela. I will get to that show in a minute, but first, think of how Latinos and Blacks are depicted in a normal environment on TV? They are often overweight, often a sidekick, and more often than not, funny. The majority of times Latinos and Blacks are portrayed as predominantly in shape is if they are in a sex symbol role, or are playing someone in uniform. But if a character is working class or just a regular person, they are, predominantly, overweight.

If I was looking to TV to find a representation of myself, and saw that if I am going to be fat I have to be funny, or if I’m skinny I have to be either rail thin or on steroids, I would find it incredibly discouraging. My wife and I used to be overweight, and we are now fitness and health nuts. Both of us hate how fitness is depicted in the media. My wife, like many Latinas, is curvy, and always will be no matter how small she gets. She especially hates how fitness magazines can make her feel unfit even though she does Insanity, Crossfit, weight training and runs regularly. It has taken her a long time to accept her body as it is and view her physical accomplishments as accomplishments but she could only do it by rejecting the social norms for fitness and health. We should love our bodies but we also must be realistic about them, and media representations are both the most prevalent in our lives and the least realistic.

Now about Cristela, if you haven’t seen it, you are missing out on one of the best sitcoms to come out in recent years. In the show, Cristela, who is overweight, lives with her sister, brother-in-law and mother, who are all skinny. Her weight is often made fun of and in one episode the show addresses the issue head on, when her sister tries to, in a deceptive manner, get Cristela to be skinny so that she can live a life like hers (with a husband and kids, namely). In the end, Cristela and the show makes a powerful statement which, while not saying being overweight is a good thing, also makes it clear that being skinny is not the key to having a happy life. 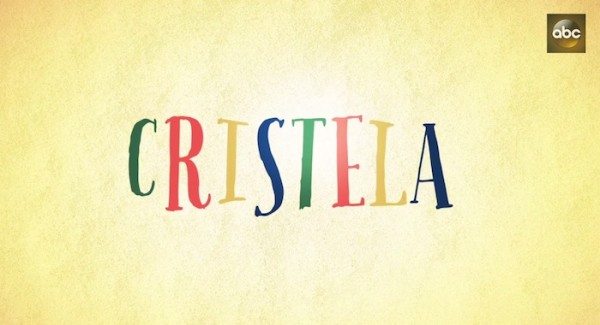 Cristela stands up for herself and proclaims her love for her body and that her goals do not have to be the same as her sister. They can be different and look different and that is okay. Such a message is extremely important, for everyone yes, but for Latinos and Blacks it provides an opening for a conversation we need to engage in more often. One that says we can be proud of our heritage and still be healthy, and that healthy comes in many forms, instead of one set, unrealistic image.

Jonathan Marcantoni is a Puerto Rican novelist and co-owner of Aignos Publishing. His books Traveler’s Rest and The Feast of San Sebastian deal with issues of identity and corruption in both the Puerto Rican diaspora and on the island. He is co-founder (with Chris Campanioni) of the YouNiversity Project, which mentors new writers. He holds a BA in Spanish Studies from the University of Tampa and a MH in Creative Writing from Tiffin University. He lives in Colorado Springs and can be reached at jon.marcantoni@gmail.com.

One response to “One Size Does Not Fit All: Body Image and Ethnic Identity on TV”