The either-or future facing most undocumented immigrants in the United States can be found on the caramel-colored palms of Daniel, a six-year-old boy from El Salvador. I met him during a recent visit to the Karnes County Residential Center—or what he, his two immigrant siblings and mother call a “prison,” located about 100 miles south of Austin, Texas.

The smile on Daniel’s face gives a shiny, ethereal quality to the deadly drab rooms and blank walls of Karnes, an isolated immigrant jail that leaked internal Immigration and Customs Enforcement (ICE) memos say was placed far from cities in order to avoid the irksome inner-city immigration activists.

While I was interviewing Daniel’s mother, he rushed over, sat next to me and started drawing pictures on his palms. After about 10 minutes into my conversation with his mom, he spoke up again. 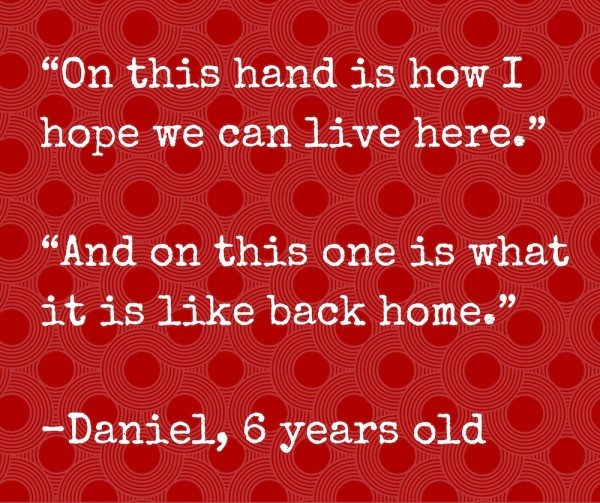 “On this hand,” he said with a bright face, “is how I hope we can live here.”  What looks like a house, a sun and children playing dominates the scene on his left palm.

“And on this one is what it is like back home,” he said as the light on his face and in the room vanished, as if swallowed by a dying star. His right palm was dominated by a picture of a soccer field with the skull that is the logo of Los Revoltosos, the gang that killed his uncle and threatened to kill him.

The immigrant future is painted on Daniel’s hands, but defining it is in the hands of President Obama, Democrats, Republicans and those who would influence them to change what everyone agrees is an immigration system of and in crisis. Before it was blocked by a Texas judge acting in favor of 26 mostly Republican states opposed to it, President Obama’s recent executive action would have provided at least some relief to over five million immigrants. But unless something changes, Daniel and millions of current and even more millions of future immigrants are not included and face the right hand of a bleak immigrant future. And if Obama’s executive action —a victory of those immigrant rights groups not allied with Obama— remains stalled or is stricken down by more judges or even the Supreme Court, there will be no sunny left hand option for any immigrants.

Such a situation requires what got immigrants and their advocates their most important recent victories: the Deferred Action for Childhood Arrivals Act (DACA) and Obama’s executive action. Both of these victories came about as a result of what some call a Third Way in immigrant rights: creating workable alternatives to both the punitive approach to immigration reform that prevails in both parties and the false promises and rhetoric of the Democrats. While his defenders and allies would like to say that Obama acted proactively and benevolently with his executive action announcement, any objective observer knows that DACA and executive action came about only after activists stopped believing Obama’s promises and forced the President to use powers he previously and frequently denied he had. 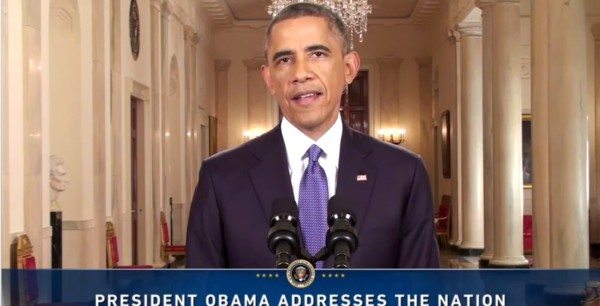 Even if Obama’s executive action manages to get out of the twisted and time-consuming clutches of the courts, a Third Way would have to be proposed, lest we condemn Daniel and millions like him to policies that have deported more than two million, jailed millions more and caused untold hardship in the lives of millions of others. Even the hardly-Democrat-friendly Wall Street Journal recently advised Republicans to move far away from the “restrictionists” and focus on solutions.

All of this raises the question of what such a Third Way might look like. Given that no such plan yet exists, it would have to start by including components that follow basic, but important principles: make it simple, make it doable, make it bipartisan and make it non-punitive. Such an approach allows whatever reasonable actors on the Republican side to differentiate themselves (and their party) from the extremism promoted by right-wing, anti-immigrant groups like NumbersUSA, FAIR and the Tea Party, which dominate the Republican discussion right now. At the same time, the proposal should give Democrats the opportunity to do what has eluded them up to now: actually getting something done (besides acting like Republicans on deportations, raids and detention, that is).

In terms of actual policies, a Third Way would have to include things like the DREAM Act, a proposal to help immigrant youth and that previously garnered considerable congressional support. In addition, policies like the AgJOBS proposal advocated by agricultural workers and employers alike makes much bipartisan sense. In addition, other initiatives might include reductions of backlogs in applications for residency and citizenship, major foreign aid packages for sender countries like Mexico, El Salvador and other countries. Again, even The Wall Street Journal sees the logic of a third way, encouraging Democrats and Republicans to “promote discrete bills that solve specific problems such as green cards for math-science-tech graduates, more H-1B visas, a guest-worker program for agriculture, targeted enforcement and legal status for the dreamers.”

Besides being the right thing to do morally, a Third Way makes political and practical sense when we consider the right hand option: continuing the failure or expanding the abominable failure that is immigration policy now. Rather then wait for the courts, rather than resign ourselves to looking at hopelessly at the bleak hand of the immigration future, immigration advocates might want to start looking at the sunny hand of real prospects for Daniel and millions of other immigrants.

One response to “Stalled Executive Action: An(other) Opportunity for a Third Way in Immigration”