THE REAL Doesn’t Follow Their Own Advice About Perpetuating Stereotypes

Yesterday, this happened on The Real. Three of the show’s hosts (Tamera Mowry-Housley, Jeannie Mai and Loni Love) decided to cook quesadillas dressed up like this: 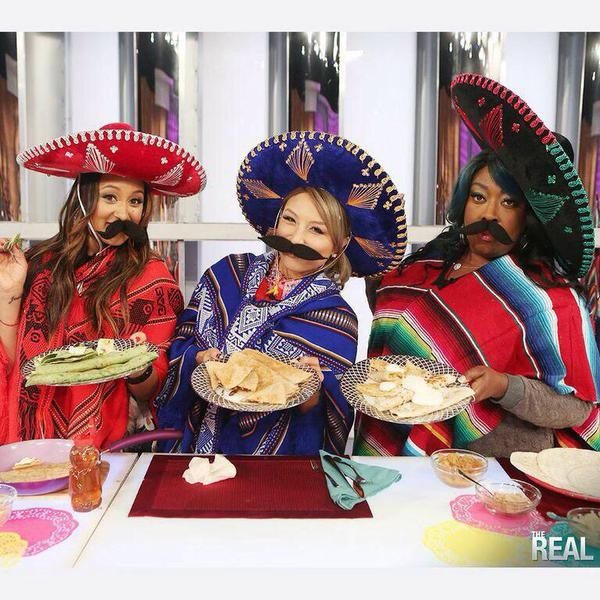 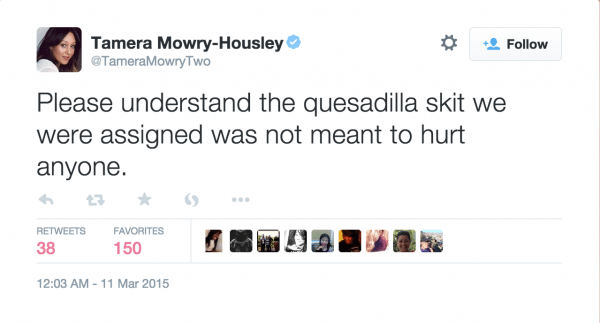 I’ll start there because Mowry-Housley’s deleted tweet is the only acknowledgement I have seen by a host or the show regarding The Real’s “dress like a stereotypical ‘Mexican’ man to make quesadillas” segment. Having something “assigned” to you doesn’t take away your ability to be culturally aware and sensitive to others, does it? How could any host think this “skit,” as Mowry-Housley’s Twitter called it, would be funny or clever? Highlighting and exaggerating stereotypes isn’t funny or clever.

You would think a show hosted by five women of color that boasts the empowerment of all women —and specifically, the empowerment of other women of color— would know this. The Real‘s stereotypical “Mexican man” segment was divisive and ultimately hurt everyone, including those that ascribe to the “silliness” of it all. At some point we all need to recognize that we’re in this together and hopefully it will lead to us treating one another with mutual respect and dignity. How are you going to dress up for Italian Food Day? Soul Food Day? Puerto Rican Food Day?

See how it looks now? Not good at all.

This isn’t about being “sensitive.” It’s about bringing to light and discussing problematic behaviors that we see and hear way too often and not supporting them. I’ve had many discussions about yesterday’s segment with people of various backgrounds, because I believe cross-community engagement is key to understanding and learning. As an example, my African-American friends said they would feel absolutely devastated if they saw a segment with two Latinas and an Asian woman mocking them and reverting to Stereotyping 101. Just Macy’s.

This is also not just about the clothing and how silly the three hosts looked wearing it. Yesterday’s segment promoted the idea that it was acceptable to stereotype and mock “some” ethnicities (aka Mejicanos) but not anyone else. It also set up the notion that when you do stereotype, as The Real did, the targeted communities should just “deal with it.” Well it’s not okay and people don’t have to stay silent. No culture is your punching bag, Tamera, Loni, Jeannie, and you too, Adrienne Bailon, and Tamar Braxton. And no, it doesn’t matter that Bailon is Latina—she seemed to be fine with her co-hosts mocking other Latin@s as long as they weren’t Ecuadorian or Puerto Rican?

Ironically, just the day before the quesadilla fail, the hosts had a discussion about embracing your natural hair. They all agreed words and actions matter because they don’t want to feed into stereotypes about curly hair and negatively impact women and especially young girls.

Because if you do feed into the stereotypes, you would think the ladies of The Real believe these stereotypical theme parties are perfectly harmless. They aren’t.

So why did the show include such stereotypes yesterday?

Why did the hosts feel the need to dress up for this segment to begin with?

Why not just wear your regular clothes?

The Real should have never done the segment. They shouldn’t have spent time writing it, planning for it or producing it. But they did, and the show’s postshow actions spoke volumes. They completely acted like nothing was wrong as they tweeted the segment again after the backlash:

Want more information on the yummy Dessert Quesadillas we made on the show? Get them all here: http://t.co/sPF9KJU15B 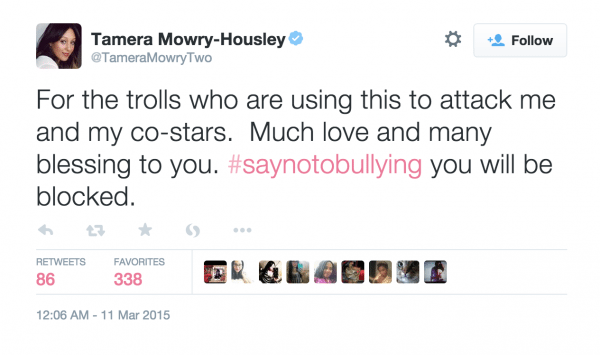 So any viewer who raises the issue that you had three hosts dressed up in as mustachioed Mejicanos is a troll and a bully?

The entire communications team needs to be scrutinized, especially for their lack of crisis management skills. They didn’t even bother to switch out the pictures on their own website until late afternoon.

If the show or the hosts have nothing to be ashamed of, then why did they change their page where the recipes and “Mexican” pictures were published? Why are Mowry-Housley’s tweets no longer on Twitter? Why are they staying silent?

They all know why… it was an offensive segment. And no matter what the show does now to clean up the mess, it’s too late.

Melissa Salas Blair is a Mom, Navy veteran and entrepreneur. She has earned a Bachelor’s degree in Marketing and a dual Masters in Hispanic Studies and Public Administration. You can follow her @MSalasBlair.