Those who ignore history are doomed to look ridiculous.

First, I’d like to give props to the Associated Press’ Matt Lee for showing how journalists can still serve the indispensable role of keeping a society, if not free, then at least accurate. When State Department spokesperson Jen Psaki told him something blatantly untrue during a press conference last month, Lee did what any good truth-seeker should do: he laughed in her face.

I would’ve laughed, too, were I not the son of a Honduran immigrant. After all, Honduras is the original Banana Republic, having been owned by U.S. corporations long before it came to be controlled by the U.S. military-industrial complex.

As a matter of long-standing policy, the United States does not support political transitions by non-constitutional means.

I knew what Psaki had said was patently false the moment the words oozed from her lips. How could Washington’s policy be “long-standing” when the United States tacitly (perhaps even covertly) backed a coup in Honduras as recent as 2009?

While the coup regime that continues to rule in Honduras prefers to call it a transition of power, that the events of 2009 amount to a coup is beyond dispute. I need not cite a 2011 report by the Honduran Truth and Reconciliation Commission which found President Zelaya’s removal had been “unconstitutional,” for the day after the coup our own president told reporters that “the coup was not legal and that President Zelaya remains the president of Honduras, the democratically elected president there.”

Nearly two years would pass before Zelaya was allowed to step foot in Honduras.

Admittedly, discerning the United States’ level of involvement in the coup is another matter. Still, it’s not so difficult, given the facts. This much is clear: That when troops stormed the Casa Presidencial de la República in the wee hours of that fateful morning, they stopped at a U.S. military base before flying the deposed president to Nicaragua. That even though he vowed not to beforehand, when the coup regime attempted to formalize its power by suspending basic civil rights and proceeding with elections in November 2009, President Obama was one of only a handful of heads of state in the hemisphere to recognize the results. And that U.S. military-police funding to Honduras has significantly increased in the years since the coup. Also, even before it, as this 2005 photo from the U.S. Army (taken at the Tamara Drop Zona in Honduras) shows. 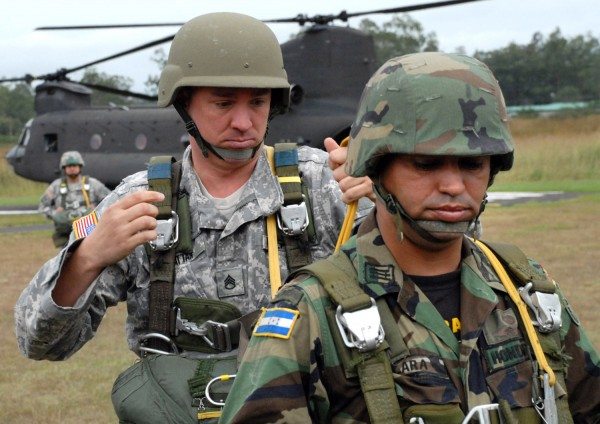 Washington may not have authored the coup, but it has certainly foot the bill.

And the 2009 coup isn’t even the most recent case of the United States supporting an unconstitutional change of power in Latin America. The Inter-American Commission on Human Rights condemned the June 2012 impeachment of President Lugo in Paraguay, which much of Latin America compared to the Honduran coup.

Guess which global defender of democracy gave its tacit approval by remaining neutral.

What’s more, given that we now know Washington operatives were involved in the failed coup attempt to remove the late Hugo Chávez from power in 2002, for a State Department spokesperson to describe Venezuelan President Nicolás Maduro’s charges of a U.S.-backed coup plot in his country as “ludicrous” is itself the very definition of the word. To suggest that the U.S. government is actively doing now what it has regularly done in the past is not crazy talk—no more than it’s crazy talk to assume the sun will rise tomorrow based on past experience.

“What’s past is prologue,” as Antonio famously tells Sebastian in The Tempest. The phrase is etched at the foot of a statue in front of the National Archives Building in D.C., if any Washington official cares to it.

Regular visitors to Latino Rebels know that I’m inclined to remind readers of the United States’ anti-democratic history in Latin America. But what surprises me most about this history is how many people either don’t know it or refuse to acknowledge it. Instead they howl about how men like Maduro and the Castros are the enemies of peace and democracy in the region —even being so brazen as to label them threats to America’s national security— while failing to mention the 50-ton, red-white-and-blue elephant.

In Latin America alone, and solely in the past half century, there have been countless coups and coup attempts approved of or orchestrated by the United States—in Venezuela, in Cuba, in Chile, in Brazil, in Honduras, in the Dominican Republic, in Haiti, etc. The list is long enough to make a writer’s fingers cramp. Many of these countries have been subjected to multiple invasions, assassinations and interventions.

But in the mind of most Americans, the United States poses no threat whatsoever to anyone, and certainly not to its neighbors. Uncle Sam is painted as a gentle giant, even a “force for good.”

The United States has tried to shoot, poison and blow up Latin American leaders.

There’s even a U.S. military torture camp in Cuba and yet, according to the State Department, it’s the nations of Latin America who must earn the trust of the United States.

Oh, the stories we Americans tell ourselves about ourselves. Forget baseball—blowing smoke is our national pastime. For of all the ministries and departments of defense in the Americas, ours is the only misnomer.

Then again, as Psaki seemed to propose last month, let’s not get too hung up on history.