Ireland Waves ‘Hello’ to the Undocumented Community in the United States 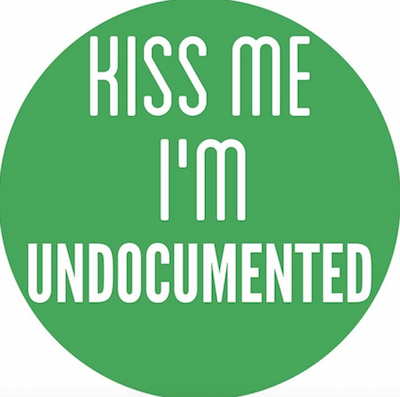 Well, sort of. As a resident of a small college town in North Florida, I can say with certainty that it is business as usual. Local bars are promoting their Irish-themed drinks, people are testing what shade of green will be appropriate for their beer, while others are just looking for another reason to party (read drink).

While I might not be the one to take part in the festivities (I remember professors in my undergrad years bribing students with extra credit so they wouldn’t skip class), this year has reminded me of something very special.

For a while now, I have been following pro-migrant organizations from abroad. I think that @DigitalUndoc was my first exposure to undocumented people in other countries. We spend so much time fighting our own rights in this country that perhaps, just perhaps, we forget that our realities are mirrored all over the world.

This year, just like last year, the Migrant Rights Centre Ireland (MRCI) celebrated St. Patrick’s Day by reminding its country about the struggles of their undocumented population.

And let me tell you, the MRCI made sure that everyone was aware about the undocumented population in Ireland… even the United States. 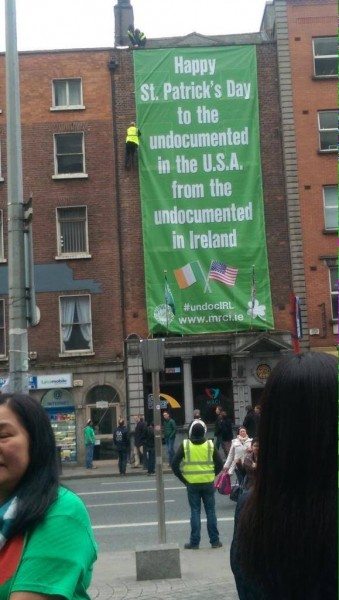 That’s right, that is a BIG banner that dedicated to us—the undocumented immigrants of the United States.

This is part of a campaign that highlights Prime Minister Enda Kenny’s trip to the United States. Why is the Irish prime minister coming to the United States, you ask? Well, St. Patrick’s Day aside, Kenny has a scheduled meeting with President Obama and Vice President Joe Biden to discuss issues of mutual concern. One of which, ironically, is immigration reform.

The following comes from via the Migrant Rights Centre Ireland (MRCI):

Every St. Patrick’s Day our politicians travel to the US to lobby for the Irish undocumented, seeking a solution for the many families separated for years by a broken immigration system. Right here in Ireland, thousands of undocumented workers and families endure that same separation from their loved ones. Most are here long term: working, contributing, paying taxes and making Ireland home. It’s time for our politicians to walk the talk. It’s time for the Taoiseach to show the leadership he commended President Obama for. It’s time to change lives.

Enda Kenny will spend St. Patrick’s Day at the White House, where he will no doubt speak of the plight of the undocumented in the U.S.

Please send this email to remind him that there are undocumented people here in Ireland too.

There is still time to sign the MRCI’s petition. If the Irish are kind enough to wave us “hello” with that amazing banner, then we should take this opportunity to put down our green beer and actually do something for the country’s whose holiday we are “borrowing”.

Thank you for the support, Ireland.

I might not be able to come and visit (for now)… but I wave my support right back at you. 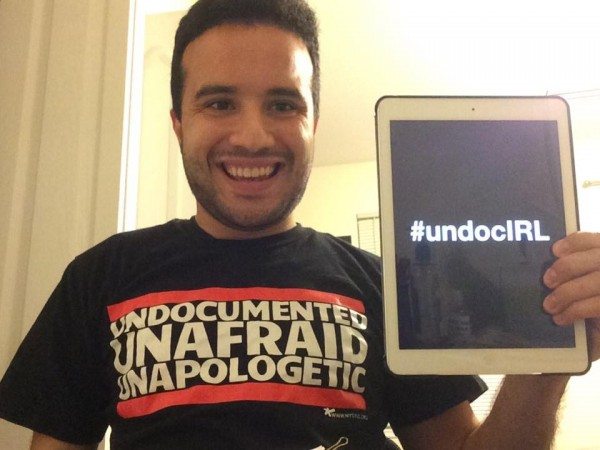 Be sure to follow the Migrant Rights Centre Ireland (MRCI) on Twitter @MigrantRightsIR to check out amazing photographs from their action, and don’t forget to sign their petition.